I want to start off by thanking all our Plank Owners, Crew Leaders and Crew Members who came out to spend the weekend hunting hogs, deer and even crazy meth Raccoons (more on that below!)

We all had a blast and truly enjoyed getting to share stories, eat great food and meet great friends! We’d like to especially thank our landowners Dirk and Robert for their hospitality and allowing us to hunt their land!

Warning: Some photos in this article are graphic and PETA wouldn’t approve!

We had a great turnout this past weekend with around 20 people attending. We did a few things differently this year, and had better accountability and organization. That’s the great thing about running an event each year, we can absorb the lessons learned from the previous year and turn it into a well oiled machine!

There were five hunting locations spread out over the 600+ total acreage we had access to and we had a kill at each location. We took a Hog and four bucks, as this was opening weekend of deer season in Texas. I believe it was two 6 points, a 9 point and a 10 point buck.

While it seems that both of our Hog Hunts have been more deer hunting than hogs, this year’s drought possibly contributed to the lower number of hog sightings. We certainly heard them but only had a single hog taken.

When not out hunting, engaged in hilarity, shenanigans or telling stories around the fire, I had a small course of instruction on lock picking and shimming padlocks. It proved to be a solid camp activity with everyone sitting around the picnic table trying their hand at the bag of locks and our lock picking stands.

Again this year we had enough food to feed an entire brigade! The first night we had some home cooked brisket and pork butt and an amazing dip concoction that Brad whipped up. Brad, a huge LSU fan, brought out tailgating paraphernalia and cooked a jaw dropping Pastalaya dish on Saturday night that would have fed at least 50 people! We topped it off with Dutch Oven Cake and Peach Cobbler.

Throughout the weekend we were treated to a special ITS Hog Hunt batch of brewed goodness by Jason of Thunder Chicken Brewery Co. Jason brought along an awesome converted keg cooler that provided nourishing cold beer all weekend!

Organized into five groups of 3-4 we had an evening hunt on Friday, morning and evening hunts on Saturday and a Sunday morning hunt followed by a shooting competition with an incredible array of prizes!

Friday afternoon while setting up our field expedient toilet, Robert came back into camp and said there was a huge Raccoon that he stumbled upon that needed to be ousted. Not wanting to make more noise than necessary, due to the distance between camp and where we’d be hunting, I grabbed my Sig P226 and Silencerco 9Osprey.

Brad was the combat photographer as I approached the building and opened the door to see the biggest Raccoon I’d ever seen. Still snoozing and not awoken by the door opening, I put four rounds of 9mm into him to only to find him get up and start making for an exit. He was definitely feeling the shots and contorting himself when moving. Surprised and not wanting him to suffer, I put a few more rounds into him. It still didn’t stop him! Brad, who was just as surprised as I was, called for a head shot and that finally ended it.

Of course I caught all kinds of crap when I got back to the camp for having to spend that many rounds to take down a single Raccoon! We dubbed the Raccoon a meth Raccoon and that it would be back later that evening to haunt me as a zombie!

Friday night Jason took down a Hog  followed by others taking two bucks the Saturday morning and another two on Saturday evening. Deer season officially opened on Saturday and it was interesting to hear the barrage of gunfire from all over Seymour, TX.

Other than a windy Saturday, we couldn’t have asked for better weather!

To avoid giving away any Hog Hunt secrets or hurting sensitive ears, I won’t get into too many details. I will say that the single point sling koozie that Brannon brought with was not only a clear indication of him being secure with his sexuality, but of true tactical genius!

Not only can he hold a drink, but quickly transition to some chips and dip in a smooth fluid movement without spilling a drop! I’ll leave off with two things. Combat Glitter and NBS. You had to be there to get those!

We held a small shoot-off Sunday afternoon with an El Prez drill on steel provided by Adam and Will from 1MOA Solutions. We had a huge prize table and everyone left with more than they came with. Thanks go out to Tactical Distributors,  AFMO, The Team Store  and  1MOA Solutions for providing all the great prizes for everyone!

Again, a big thank you to Robert and Dirk for hosting the event and allowing us the use of their land for the weekend. Next year is going to be a blast too and we can’t wait to do it all over again!

UPDATE: Hog Hunt II T-Shirts are now in our Store! 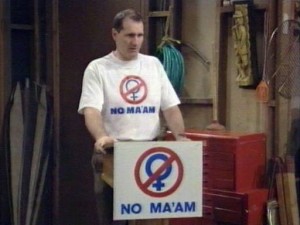 Hog Hunt T-Shirts are Now Available in our Store! 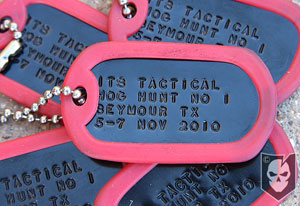