5 replies to this topic

I am looking to build a few medical kits for my self. While doing this, I am looking to create a list of medical items that are recommended for use and where those items are stored. I've created a spreadsheet on google docs to get input from those on here with much more experience than I and also to gather the thoughts of others.

The spreadsheet is broken down into the item, what it's used for (hemorrhage control, airway, etc), and what kit should it be included in. For the pocket kit, I am looking for something similar in size to the ITS EDC kit or the Pocket DARK. For the backpack kit, I am thinking ITS Fat/Tallboy size. Car and Home kits will be a seahorse case without the foam.

Here's a link to a Google Doc. Please look it over and add what you see fit. Once it is filled up, I'll make it a PDF and post it here for everyone again.

Personally, I'd ditch the RATS and go with a CAT or SOFT-W. The RATS did not fare too well in some training I've been to. Plus, you'll have more people familiar with those two over the RATS. If they're working on you, you want the equipment with the highest likelihood of being known to your rescuers.

Just my personal opinion. I'm in no way an expert

Personally, I'd ditch the RATS and go with a CAT or SOFT-W. The RATS did not fare too well in some training I've been to. Plus, you'll have more people familiar with those two over the RATS. If they're working on you, you want the equipment with the highest likelihood of being known to your rescuers.

Just my personal opinion. I'm in no way an expert

Whats your level of training?

I'd add rolls of kerlix, lots of it. Next, grab some Coban wrap, or what I liked to use for personal kits, vet wrap. Same idea, not considered "sterile" but at that point the wound has been dressed and is only being secured for transport to a medical facility for further treatment. You can decide, you'll only be saving a couple bucks. Next I'd add a couple chest seals. Sure you can fake those, and its a good idea to know how to fake those; but why? Order some and don't mess with it. Buy at least two, I'd personally have at least three incase the dude is really hairy and you have to sacrifice one. Which leads to the next one. Tape. Grab a few rolls of tape. Both medical, and duct tape. I loved securing my IVs with duct tape when with the S.O. it would piss off the ambulence people, but you know what, when the people were sweating, and the normal tape wasn't sticking the duct tape would. If you can, toss one or two SAM splints in there also, those things are amazing! You can use them for just about anything! Be sure you add the stupid things in there also, like bandaids and the such. I've been stuck with egg on my face when someone got a little cut and I have these full on medical bags and didn't have a little bandaid and ended up having to cut a larger bandaid in quarters to give them. That was kind of embarrassing

I have a fairly basic level of training. Through work I am exposed to medical scenarios all the time so I have been gaining more an more knowledge with more formal training in the near future. My goal with these kits is to stabilize until the professionals arrive, whether that is 5 minutes or 45 depending on the scenario.  With the larger kits, I am trying to think beyond IFAK level and think of broken bones, large wounds, and those types of injuries.

I have a pocket trauma kit, in a hard drive case, best size pouch I could get, protects the contents well. In my bag I keep a larger kit.

Both of these are for major injuries. For lesser complaints I have a boo boo kit in a maxpedition wallet with tweezers, band aids, safety pins, alcohol wipes and common meds. I don't like to root through my lifesaving kit for an ibuprofen because someone's hungover.
Medical Cube 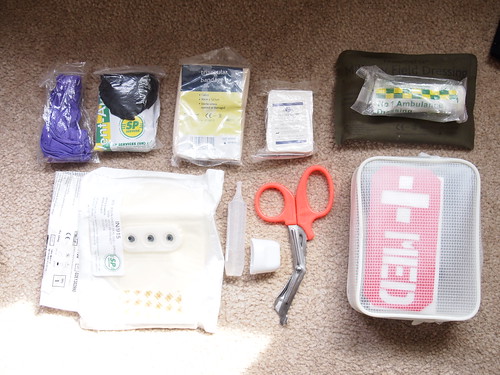 Also tagged with one or more of these keywords: medical, kit, supplies