Stay Sharp: The 10 Principles of Blade Combat - ITS Tactical

I’ve spent most of my life studying blade combat and there’s a major motivating reason for that, knives scare me. It’s been said that we fear what we don’t understand, so in an attempt  to quench that fear, I’ve done my best to understand the blade. In doing so, I’ve trained in numerous blade-oriented martial systems from various cultures to learn how different groups have used and defended against one of the oldest weapons in existence.

What I’m presenting here are ten guiding principles I’ve derived from my studies and catalogued within my personal system of blade combatives. Whether you’re a student of the blade, or simply a prepared citizen seeking knowledge, I believe the following principles will enhance your studies and more importantly, enhance your survivability.

This one may seem like a no-brainier, but this principle has been all but lost in many modern schools of combat. The mantra, “You WILL get cut,” has been so loudly chanted that the roar has completely drowned out the reasoning behind the idea. The ultimate goal of any physical encounter is survival. One way to increase your odds of surviving an encounter with a blade is to avoid bleeding out by not getting cut.

Don’t Be Surprised When You Do Get Cut

This is really the attitude we’re trying to convey with the axiom, “You WILL get cut.” Mindset is key to survival. If you’re involved in close combat with a blade, there’s a very high probably that someone will get cut, possibly you. You absolutely must be in tune with this reality, whether you’re choosing to carry a blade for self-protection or just preparing for an edged weapon attack.

Everything is a Target

When we talk about blades, every part of the human body is a target. There’s a saying in the Filipino Martial Arts, “Blade seeks flesh.” Where there’s soft tissue, there’s a target. Yes, there are vital targets that cause maximum damage, such as the arteries, lungs, hearts, throat, etc. However, any part of the body can be cut.

If you don’t think a cut to the hand can take a whole lot of fight out of someone, you’ve never had your hand cut down to the bone. I’ve seen a half-inch cut to the hand sever a tendon, causing partial loss of function. Pain and blood can serve as physical distractions and have a psychological effect on your opponent. A cut to the hand, arm, face or leg may be enough to de-escalate the attack. If nothing else though, it will help you create openings to more severe targets. 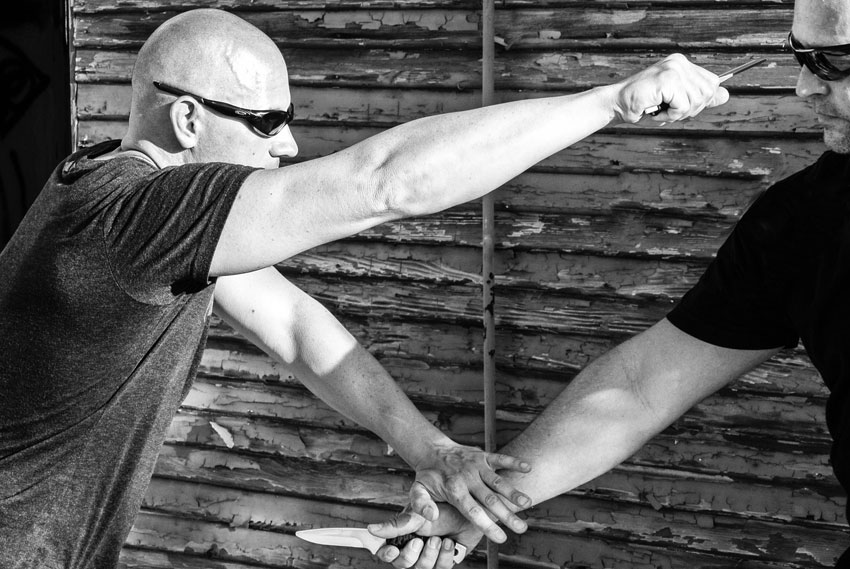 Keep the Length of Your Knife Between You and Your Threat

If you’re using a blade to protect yourself, you want to force your threat to get past your blade to get to you. Keep your weapon side forward and position your blade so the tip is pointing toward your threat. Anything that leads in front of your blade, including your knuckles, becomes a target of opportunity for your opponent’s blade.

If you learn and apply this principle correctly, it will not only help you defensively, but also offensively. Your cuts will be cleaner and more fluid as you learn to draw the blade through your target, as opposed to allowing the blade to rotate over (like a baseball bat). Your follow-up cuts will be faster as well, since you’ll minimize recovery time.

Keep Your Blade Moving at All Times

It’s harder to detect motion from motion and a moving target is harder to hit than a stationary target. If you’re using a blade as a means of self-protection, then your blade will become a target as well a weapon. By keeping your blade in constant motion, you’ll make it difficult for your opponent to detect and predict your movements.

You’ll also make it difficult for your opponent to attack your blade in an attempt to disarm or disable your weapon or weapon hand. This principle is especially important if you’re facing a threat armed with a blade or impact weapon.

This principle ties in directly with the previous one in reference to keeping your blade moving. It’s important to avoid repetitive motion that your opponent can use to establish your pattern of movement and predict where your blade will be at a given moment.

Be Fluid and Let the Blade Do the Work

One of the advantages of using a blade is it doesn’t require a lot of strength or power to be effective. As long as it’s sharp, the blade will do most of the work. Let the blade do its job. Control the path of the blade and make your cuts and thrusts fluid and smooth. Smooth is fast. Anyone can use blade; what differentiates a master of the blade from a novice is the ability to flow from one cut to another with speed and precision. 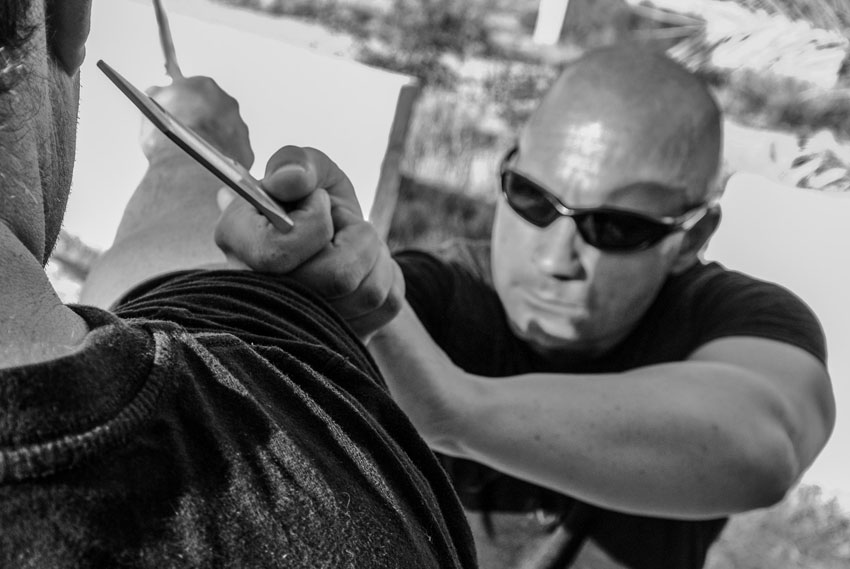 Footwork, Timing and Distance are Key

You can’t be effective with a blade if you don’t understand and apply footwork, timing and distance. These three elements essentially form a triangular principle, because all three are interrelated. You must be able to control the range between you and your opponent through footwork and timing.

Evasion is More Important than Invasion

This principle is multi-faceted. Whenever possible, it’s better to evade an attack altogether than to engage in combat. If you can run from an attacker, it’s better to do so. If you can hand over your wallet to avoid going head to head with a knife-wielding mugger, then give him your wallet. You can cancel your credit cards later.

If you find yourself in an unavoidable confrontation, or if the lives of others are at stake and you must stand and fight, then the same principle applies within the conflict. Remember, Don’t Get Cut (Principle #1). Don’t encounter your opponent’s blade if you can evade it and do not sacrifice yourself to land your own counter attack if you can avoid it.

Don’t Be in a Hurry to Die

The final principle is truly the essence of all the other principles. Everything I’ve addressed here is about surviving and succeeding. This final principle is really a mindset as well as a strategy. Don’t rush into an attacker with an overcommitted defense.

I’m not suggesting you should hesitate, I’m suggesting you should learn to identify when to rush in and when not to. Use the previous nine principles to avoid getting cut, attack available targets, protect your own blade and control distance; thereby allowing the opportunity to find your opening and finish the fight.

I’ve laid out for you the ten principles I teach my students within the Comprehensive Fighting Systems framework of blade combat. The information provided here isn’t exhaustive by any means, but can hopefully serve as a reference point to improve your understanding of the use of the blade.

Remember, a blade should only be used to protect yourself or another against serious bodily injury or death. The use of a blade should never be viewed as anything other than deadly force and you’re responsible for your decision to use a blade as a means of self-defense.

Editor-in-Chief’s Note: Please join us in welcoming Chad McBroom as a contributor on ITS. Chad is the owner and founder of Comprehensive Fighting Systems and specializes in the practical application of edged and impact weapons. Chad is a freelance writer who regularly contributes to Black Sheep Warrior, BladeReviews.com and other publications. He’s also the author of the book Solving the Enigma: Insights into Fighting Models and has contributed to several books on blade combat. Chad is a blade designer and consultant, using his extensive knowledge of edged weapon tactics to help design some of the most versatile edged weapons on the market. 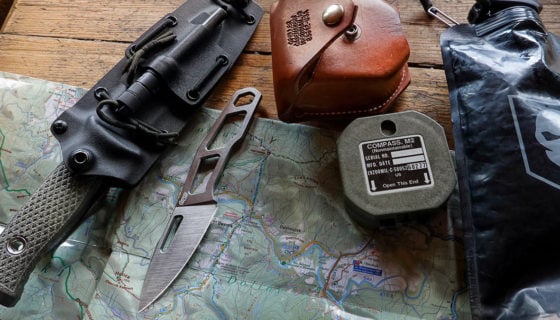 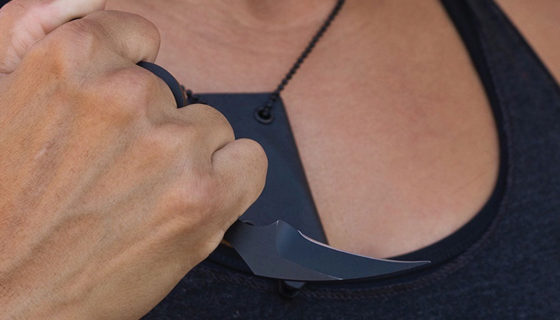 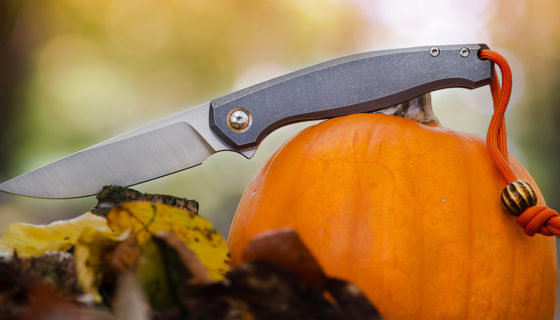 The Functional Beauty of the ACE Sonoma Folding Knife