The Tarahumara from Hill People Gear is a small pack that manages to reach an impressive equilibrium between simplicity and versatility. Originally envisioned as a hydration carrier, the Tarahumara grew during its development into a small pack and compression panel. 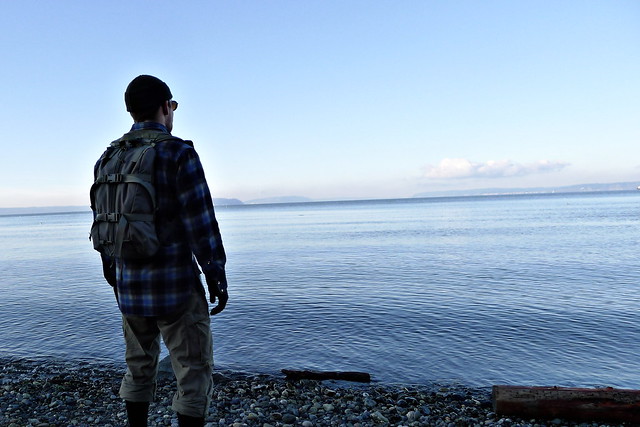 The construction of the Tarahumara is similar to that of the Hill People Gear Kit Bag. It is sewn in the US by First Spear, made of 500 denier Cordura and available in Foliage, Ranger Green, and Coyote.

The bag is approximately 17″ tall and 9″ wide. The cut is tapered, resulting in a depth of about 6″ at the bottom and 3″ at the top. Hill People Gear claims that the volume of the pack is around 750 cubic inches. Based on my experience with other packs, that is a bit low. I would estimate it to be closer to 1,000 cubic inches. 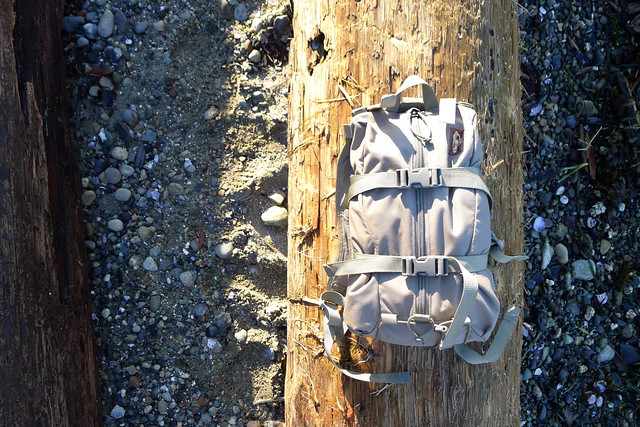 The bag features a simple, clean design. There is a wand pocket on either side of the pack for storing water bottles, scopes, or baguettes. The bottom of the pack has four webbing loops with a piece of paracord threaded through, secured by a cordloc, which provides an attachment point for some bulky items. A single, beefy, vertical zipper runs along the center of the pack. Two compression straps run horizontally across the pack, both compressing the load and reinforcing the zipper. Both the compression straps and the sternum strap on the harness are closed with 1″ wide side-release buckles. This commonality of hardware speaks to one of the themes of Hill People Gear’s design: field serviceable simplicity. If one buckle breaks, you have two others to work with. 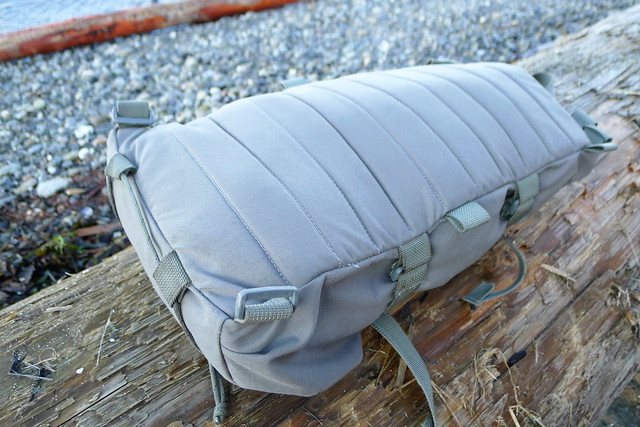 The back panel is padded with foam, horizontally stitched. This provides some structure and protection from awkward loads within the bag. Between the foam back and the actual bag is a slot pocket, which can be used to store anything from maps to lever action rifles. 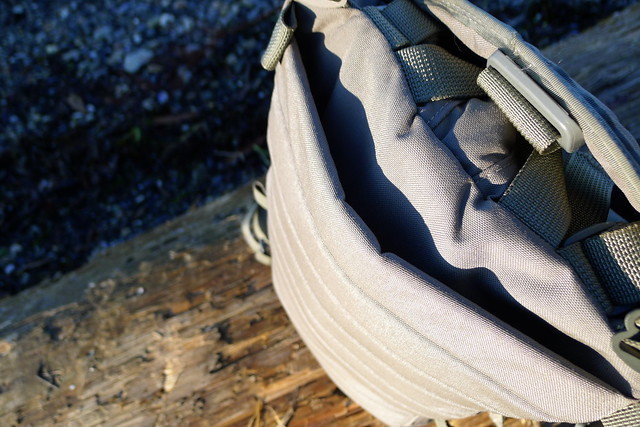 Inside, the Tarahumara is simply a bare sack. The only concession to internal organization is a webbing loop at the center of the top of the bag. This can be used for hanging a water bladder, or for attaching a small pocket via a carabiner or Grimloc. 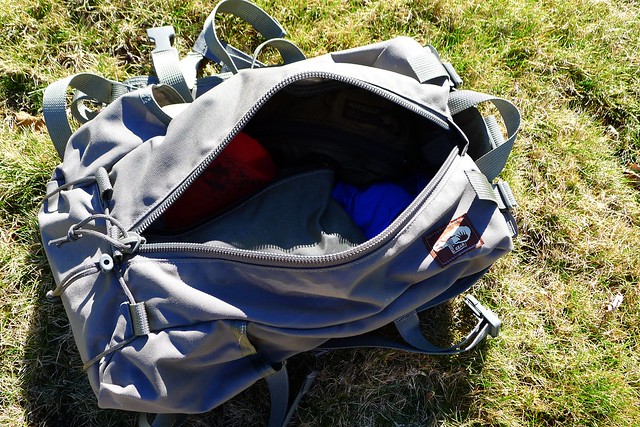 The harness attaches at the top of the Tarahumara via two 1″ pieces of webbing. At the bottom, it ends with a 1″ ladderloc on either side that leads to the 1″ webbing that typically makes up the lower shoulder straps on any pack. It is easily removable — although it does take a couple minutes to do so — which is what allows the Tarahumara to be used as a simple pocket or compression panel on a larger pack. More importantly, the versatility of the harness allows it to replace the stock shoulder straps on many other packs. 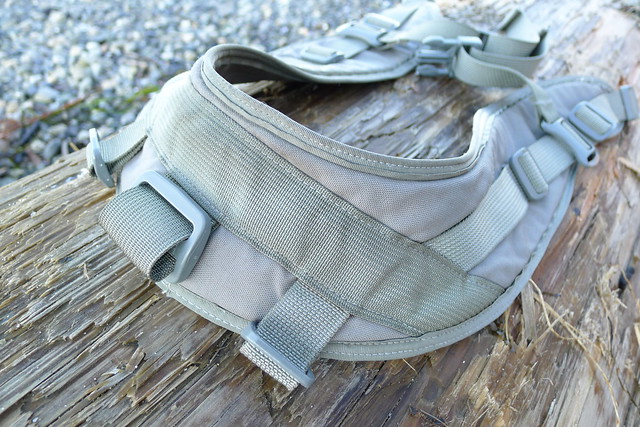 At roughly 3.5″ inches, the Hill People Gear harness is significantly wider than most shoulder straps. This increased width results in increased comfort. Because the harness is a single piece, any load is also distributed across the back, rather than simply being placed at a single point on the top of either shoulder.

When I first saw people replacing the shoulder straps on their Kifaru packs with the Hill People Gear harness, I thought it was neat that the harness was versatile enough to allow the switch, but, given the role of shoulder straps on a larger pack, I didn’t think that it would offer any practical improvement. Then I began to experiment with it.

The problem is that packs are not properly adjusted 100% of the time. This is not the pack’s fault — it is entirely due to user error — but the fact is that if you hump a pack long enough, eventually you’ll mis-adjust a few straps. This can result in additional weight being placed on the shoulders, and, when weight is placed on the shoulders, the Hill People Gear harness is much more comfortable than any shoulder straps that I’ve used. It is much more forgiving of error. 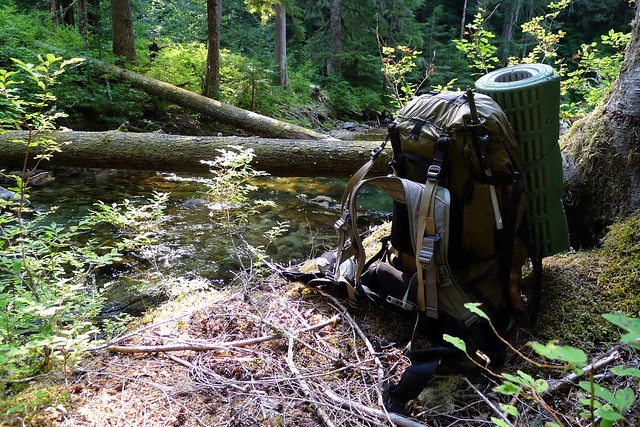 By mid-August I decided that switching back and forth between the systems was a waste. There were no situations where normal shoulder straps were superior to the harness. Since then I haven’t used the normal shoulder straps on my larger packs once, and I don’t intend to use them in the future. I simply move the Hill People Gear harness to whichever pack I’m using.

The only potential drawback of the Hill People Gear harness that I can find is for those with asymmetric shoulders. Two removable shoulder straps can be independently adjusted to suit the different height of either shoulder. A single-piece harness cannot. Those with asymmetric shoulders may not experience an increase in comfort with the Hill People Gear harness. For the rest of us, the harness alone is well worth the price of the Tarahumara.

As a compressional panel, the Tarahumara (and its larger brother, the Highlander) is an integral part of the pack system that Hill People Gear is developing. To attach the Tarahumara bag to a larger pack, Hill People Gear offers a Compression Kit. They refer to this as “a very versatile system that will let you attach virtually anything to anything else” — a bold statement which is surprisingly apt.

The kit consists of varying lengths of 1″ webbing, attached to a lot of G-Hooks and a couple side-release buckles. The simple kit presents a lot of opportunity — a sort of Legos for gear nerds. I’ve spent hours experimenting with the possibilities. If you can’t securely attach a smaller pack to a larger one using the Hill People Gear Compression Kit, you’re probably not trying hard enough. 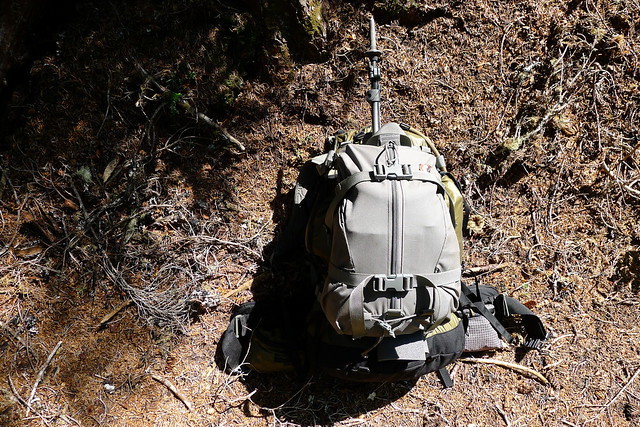 Attaching the Tarahumara to a larger pack will take anywhere from two to four pieces of the kit, depending on your method. If you can accept the additional weight, I’ve found this to be an excellent addition to my larger packs. The Tarahumara increases the available volume of the system, and the Compression Kit both attaches the Tarahumara to the pack and also compresses the entire load. 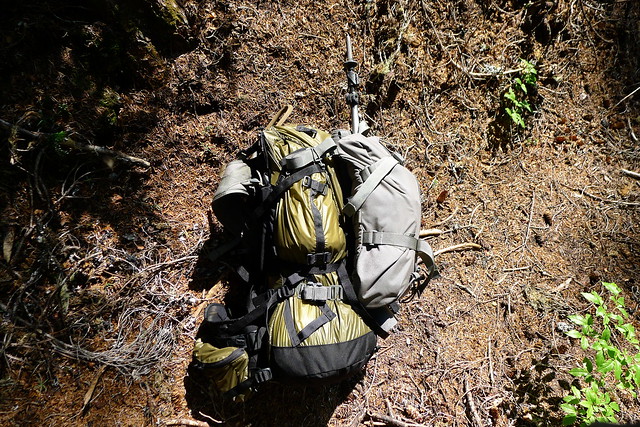 Initially the Tarahumara was envisioned as a small hydration carrier that would attach to the back of a Kit Bag. The Tarahumara grew from this original scope during development, but the original intent is still addressed with the Runner’s Harness.

The Runner’s Harness consists of a version of Hill People Gear’s standard harness. Instead of terminating in two 1″ ladderloc buckles to attach to the 1″ webbing of a pack, it cuts off the last 6″ of the harness and terminates in 2″ ladderlocs. This allows it to connect directly to the top of any Kit Bag, after the Kit Bag’s mesh harness is removed. 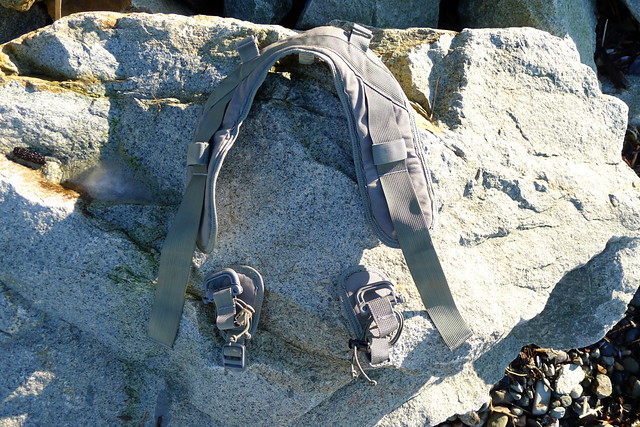 Two wings are also included. These attach to the bottom of the kit bag via Grimlocs, and then to the 1″ webbing on the bottom corners of the Tarahumara via ladderloc buckles. Each wing includes a piece of shock cord which is laced between the webbing where the Grimloc and ladderloc buckles connect. Adjusting this cord helps to keep the system snug on various body types and helps stabilize the system by absorbing the shock that running entails, while still allowing the chest to expand. I found that adding cordlocs to the shock cord allows me to better maintain my preferred adjustment. 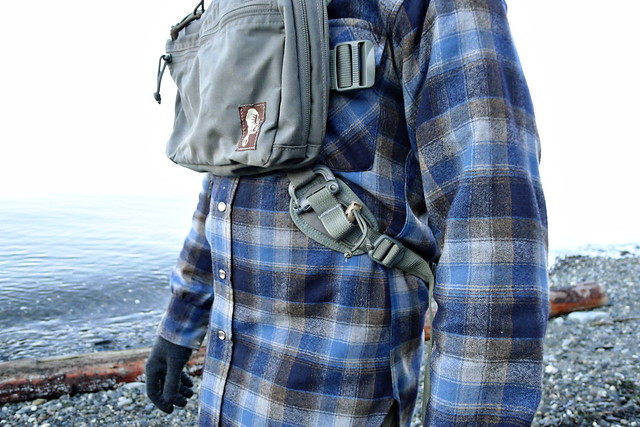 The few times I have run with both the Kit Bag and the Tarahumara, I have appreciated the superiority of the Runner’s Harness. As a small day-hiking or peak-bagging setup, a Tarahumara and a Kit Bag connected with the Runner’s Harness is very comfortable. It’s one of the most comfortable ways I’ve found to carry smaller loads up to about 20 lbs. But it is not something I use often. Most of the time I am happy enough to just wear the Kit Bag with its mesh harness and throw the Tarahumara with its normal harness over the top of that. (When wearing the Kit Bag and the Tarahumara, I never mess with the Kit Bag’s Lifter Straps.) 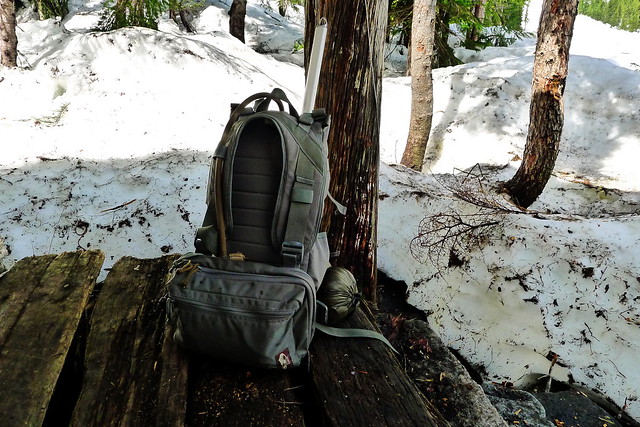 Since purchasing it a year ago, the Tarahumara has become my daily carry bag. Just about the only time that I’m not carrying the Tarahumara is when I’m out in the mountains with a larger pack, and then I have the Tarahumara’s harness on that pack — and perhaps even the Tarahumara itself compressed to the back. The simplicity, versatility and modularity of the Tarahumara makes it well worth considering as an addition to your pack collection. 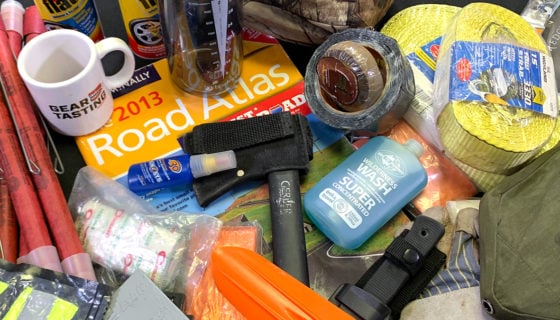 Can a 7-Year-Old Vehicle Bag Stand Up to Texas Heat? 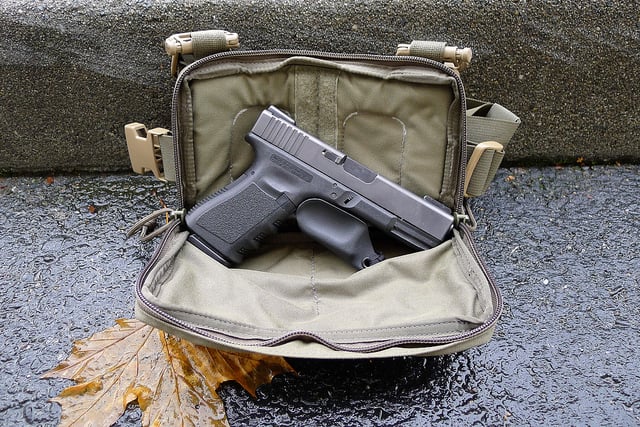 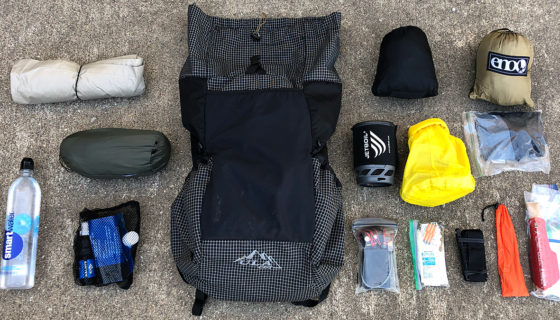 Consider the Three P’s Before Packing for Your Next Trip 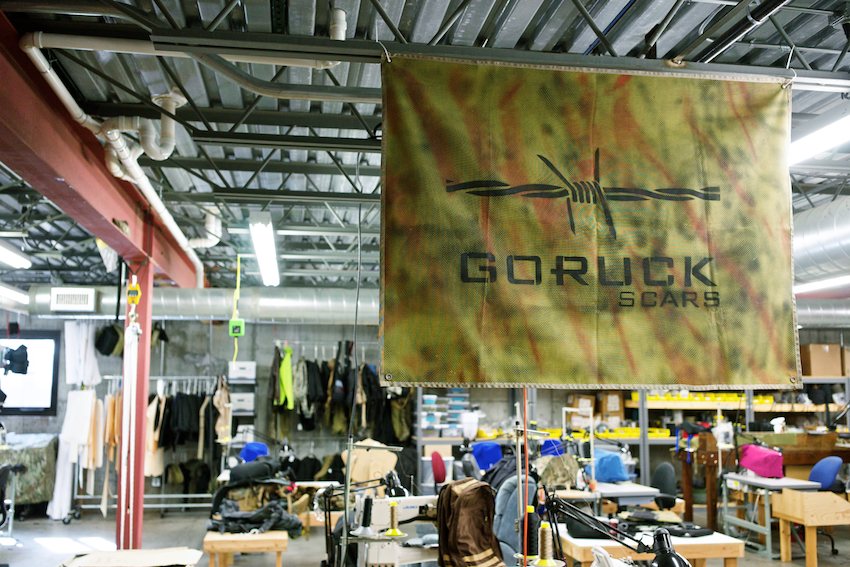