Combatives Style Selector: 5 Questions to Help You Choose Your Style

Everyone wants to imagine themselves as the hero. The one who knocks out the mugger or jumps on the armed terrorist. The average Joe who rises to the occasion and saves the day. However as the saying goes, you don’t rise to the challenge, you fall to your level of training. If your combatives training consists of nothing more than rants about self-defense tutorials on YouTube, then you’re in for a brutal (and potentially fatal) reality check when SHTF. How do you cure Armchair Commando Syndrome? The answer is simple but not easy. You train, a lot.

This brings me to the most common question I probably get, “what’s the best combatives system to learn?”

As a self-defense instructor for two decades, I’ll let you in on the big secret. There’s no single best fighting style. Anyone who tells you otherwise is either a liar, or has deluded themselves into believing that their martial art is the most effective one on the planet; a “True Believer” with a capital T and B. You should avoid them like you would a religious or political zealot.

Have I offended you yet? No? Good, then take a seat and answer the following five questions that are designed to help you figure out the combatives system that’s right for you.

#1 – Why Do You Want to Learn Combatives? 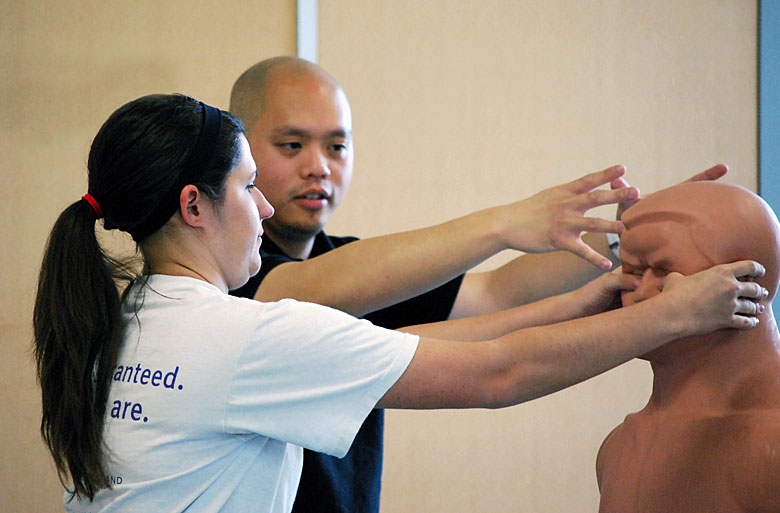 Knowing why you want to study a self-defense method is vital. After all, your intent dictates your training. If you want to become an Olympic backstroke specialist, you don’t sign up for SCUBA lessons.

Is your primary concern unarmed personal protection? Then look for a non-traditional, reality-based program that emphasizes simple but effective moves, such as the SPEAR System or Krav Maga, a civilian version of Israeli military combatives.

Perhaps you have experience and want to get back into martial arts but don’t care much for belt rankings? Then check out Jeet Kune Do, the “scientific street-fighting” style created by Bruce Lee.

Everyone will have different answers; that’s why there’s no one-system-fits-all approach. Find out the reason (or the top three reasons) you want to learn how to defend yourself and that will help narrow things down. 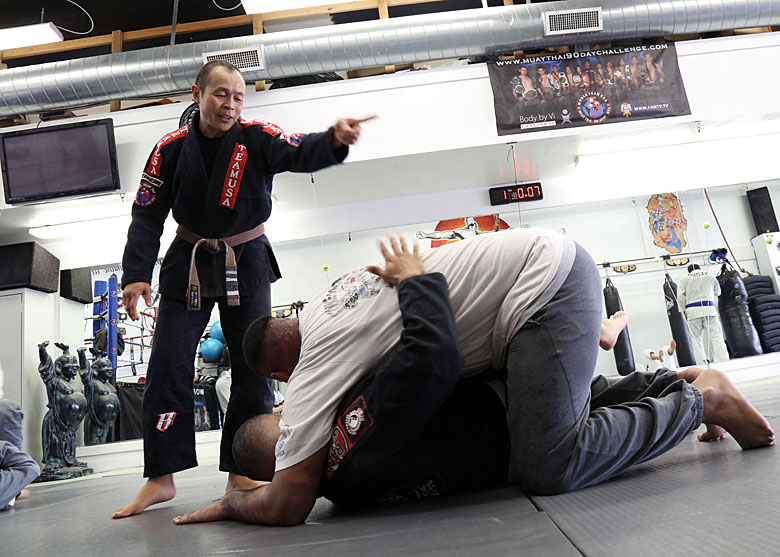 One of many systems Conrad Bui teaches is Brazilian Jiu-Jitsu, known for its grappling applications and low-impact fitness benefits.

No, I’m not asking if you’re single and rich. I’m wondering what your physical capabilities are. Are you fat or fit, limp or limber? Don’t get me wrong; this isn’t about body shaming. What I’m saying is that self-assessment is key to determining which combatives system is ideal for you.

Let’s say you’re 55 years old, your six-pack has turned into a soft keg and your knees are acting up. Skip the full-contact kickboxing and look for a program that lets you train several times a week at moderate intensity, yet is still effective, like as Brazilian Jiu-Jitsu. This art, which grew from Japanese jujutsu, focuses on locks, chokes and submissions that are street applicable in certain circumstances.

Now if you’re a strapping 21-year-old who eats CrossFit routines for breakfast, then you can dive into mixed martial arts with enthusiasm, as this combat sport teaches grappling, wrestling and stand-up striking through high-intensity drills and sparring.

Honestly examining your age, injuries and flexibility (or lack thereof) isn’t about setting limits. It’s about staying healthy enough to build yourself up before breaking those limits as you progress through your training. First though, you have to know where you can realistically start. 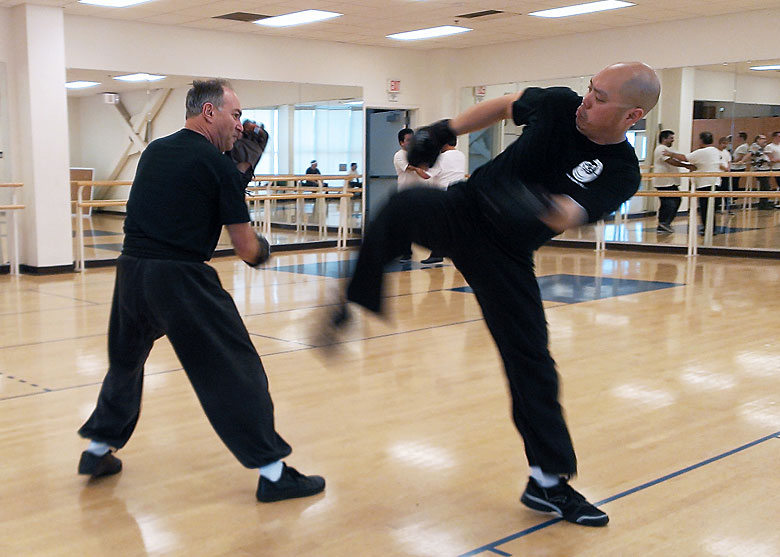 Traditional martial arts, such as kung-fu, offer both cultural/academic and physical benefits. Here Patrick gains more of the latter by sparring his instructor, Sigung Hal Weiss.

Self-evaluation includes looking at where you live, work and play, as well as the legalities associated therein.

For example, if your entire self-defense strategy is focused on using only a concealed handgun, let’s hope you never have a work trip or vacation planned in Los Angeles or San Francisco. The Golden State doesn’t recognize out-of-state carry concealed weapon (CCW) licenses and its counties and cities make it difficult (if not impossible) for locals to obtain a CCW permit. Similar circumstances can be said about edged weapon skills if you live in New York City. The Big Apple has some of the harshest knife regulations and anecdotal evidence can conclude that police rigorously enforce them on law-abiding folks.

Expect to put in weekly practices at a gym

It would be horrible to have saved your wife from a potential rapist, only to have your kids grow up without a father because you went to prison for using a self-defense tool deemed unlawful by local authorities. Make sure the techniques, tactics and strategies you’ve decided to learn are sound; both in terms of street effectiveness and the legalities that apply to the region you’re in. 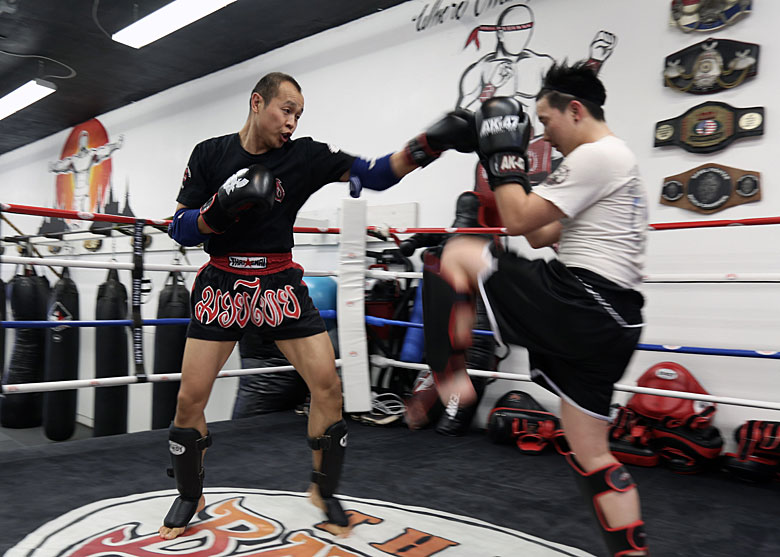 One sparring session with Coach Conrad Bui and one will immediately understand the explosive effectiveness of Muay Thai, kickboxing from Thailand.

How much time will you devote to combatives? Six months, six years, six lifetimes? How often will you actually train during that timeframe? Five times a week? Once a month?

If your goal is to become a living weapon, don’t assume a weekend pistol seminar will do. Expect to put in weekly practices at a gym, dojo, or firing range for several years. It will take at least five years if you want to be good at any one discipline.

If you can’t wait several years to find out if your dedicated training will save your skin in an actual fight, then ditch the traditional martial arts (TMA). I’m not a hater, in fact, I love and have been studying styles like kung-fu, karate and tae kwon do since 1995. If you want to study TMA, then do so as a lifelong endeavor.

However if a student said, “I’ve got six months to learn how to fight before I go to prison,” I’d definitely recommend they learn something different from someone who asked me, “I want to dedicate myself to an art; which one should it be?”

Get a sense of whether you’re in it for the long haul or a short sprint, then search accordingly. 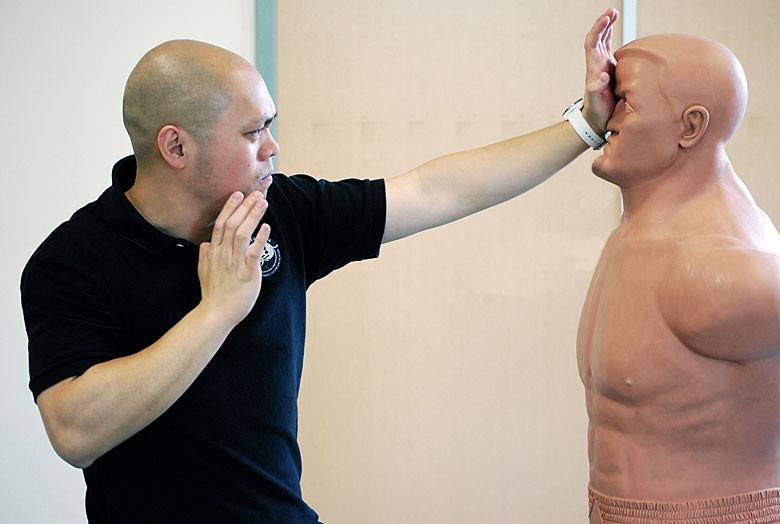 Essentially, what’s your role? What type of person are you?

Do you wear a badge or BDU’s for a living? Then there’s a good chance your primary weapon is a firearm. However, if you think your handgun or rifle is the cure for all that ails you, you might end up one sick patient. Every switched-on cop I know has always acknowledged a deficit in their agency’s defensive tactics and has sought out more martial knowledge on their own time. Your ideal fighting method should incorporate transitions to and from firearms, but also edged and contact-distance weapons or unarmed techniques.

Maybe you don’t go into harm’s way on a daily basis, but you’re ready to defend the helpless if needed. If so, there’s a good chance you’re probably a preparedness-minded person who carries a knife every day. Consider a fighting style that will put a training blade in your hand during your first class, like Kali. This Filipino combat art teaches deadly skills that apply to knives, blunt weapons and empty-hand tactics.

The key is matching them up

If fitness is more a priority than fisticuffs, then look at combat sports that will give you both a killer body and skills to stop a killer. Check out Muay Thai, a form of kickboxing from Thailand. Its deadly use of knees, elbows, kicks and punches will help you drop pounds and thugs alike.

This category isn’t necessarily for bookworms, but rather for anyone who dives into the minutia of a topic. If this is you, there’s a good chance studying TMA is the path for you. Traditional martial arts provide not just physical techniques and kata (prearranged sequences of stances, blocks and attacks), but also a whole set of traditions, terminology and culture. One of the most effective Traditional martial arts is Pentjak Silat Serak. I don’t say this only because I’m a Serak practitioner. I say this because in my more than two decades of training, I’ve rarely seen a deadlier TMA. That’s thanks to its vicious strikes and gouges, bone-breaking locks and pinpoint takedowns. Not to mention a lethal bladed weapon curriculum too.

Don’t feel like you fit into any of the above categories? Don’t worry, this isn’t meant to be comprehensive. There are just as many types of self-defense systems as there are types of people, the key is matching them up.

The question is never, “What’s the best combatives system?” Instead, it should always be, “what combatives system is best for you?” Like dating, selection should be based on compatibility and preferences, not just on what looks “hot” at the moment or what others tell you.

Another vital aspect to consider isn’t just the system itself but also its teacher(s). Are they legit, can they perform what they teach and do they explain things well? It’s one thing to be able to do something, it’s another to be able to teach it effectively. The topic of finding the right combatives instructor could fill another feature story in and of itself, so I’ll stop here for now.

My last point is a crucial one for those who take their safety seriously. Every fighting method has flaws, so don’t be a “True Believer” in any one system. The more you learn, the better you’ll be able to adapt to a given situation; especially if it’s the fall-to-your-level-of-training kind.

Editor-in-Chief’s Note: Please join us in welcoming Patrick Vuong as a contributor on ITS. Patrick is the co-founder of Tiga Tactics (a combatives training and consulting company) and the former senior editor of RECOIL Magazine. As a self-defense teacher since 1999, he uses his diverse knowledge of fighting methods to close the wide gap between two traditionally separate warriors: martial artists and firearms enthusiasts. He’s an instructor in several systems, including a form of kung-fu called Lai Chung Chuan Fa and the Filipino bladed art of Pekiti-Tirsia Kali. For more information, visit Tiga Tactics.