Living Better: Be Outside, Be Active and Be Thankful - ITS Tactical

Well, it’s that time of year again when the days become so short that spending time outdoors becomes next to impossible for the working professional. It’s dark outside when you rise for work and is already getting dark again when you walk to your car for your evening commute home. Even on the weekends it can be difficult to make time for experiencing the outdoors because winter temperatures, rain, snow and freezing wind can be detrimental to the experience, taking away any desire to do anything but watch football. It’s in these times that the human body is subjected to the physiological effects of a sedentary lifestyle and a Vitamin D deficiency.

The goal of this article is to educate you about why we feel the way we do during the holiday season. If we can gain an understanding of what’s going on chemically and psychologically within our bodies, then we’re at an advantage for two reasons. One, we can make a serious effort to change our daily routine in support of a healthy mental outlook and two, we can at least have enough emotional intelligence to avoid misplaced aggression.

Our bodies REQUIRE sunlight. This is not a suggestion, but rather a biological need. Life in the post-modern world is directly opposed to tens of thousands of years of evolution and development. As early man roamed the world as the apex predator of his time, he had to leave the cave for survival, regardless of preference or opinion. For our bodies and minds to function optimally, we need to supplement certain elements that have been key in the survival of our species since its formation.

It’s estimated that almost 30% of people experience Seasonal Affective Disorder (SAD,) a very appropriate acronym. SAD is also referred to as Winter Depression. The symptoms include:

If you’re anything like me, then you identified with at least a couple of the symptoms listed above. While there are some indoor treatments for SAD, the most common involve increasing the amount of light intake. There are companies that have produced fancy machines to pump sunlight into the body while indoors and I’m sure that they’d be more than happy to take your money; or you could just buy a good jacket and go outside.

According to a Harvard Medical School study done in July 2010 the average American spends over 90% of his life indoors. The number increases the older one gets. The indoor lifestyle is reinforced by a computer and technology driven society. Young people especially, would much rather spend hours playing video games that simulate being outside than actually being active while outdoors. This is alarming to me as it’s not only in the winter months that our kids would prefer to be indoors, it’s a year round thing.

Since people have always, until recent history at least, had the need to work outside for the survival of the species, our bodies have developed processes that are only triggered by sunlight. When sunlight hits the skin, the circuitous process begins. Sunlight is actually the trigger for the liver and kidneys to get involved in the creation of Vitamin D. Many vitamins are necessary, but not all vitamins are effective in fighting disease. Vitamin D is the exception. According to Harvard Health Epidemiological studies suggest that the vitamin has protective effects against osteoporosis, heart attacks, stroke, depression and even cancer. Thats right folks, sunlight fights cancer.

Some of you out there may be reading this thinking that between work, family, the commute and winter sunlight hours there’s no hope. Well, I have some good news. You can make all the vitamin D that your body requires in just 10 to 15 minutes a day. What I would suggest for you is taking your lunch outside on sunny days or spending as much time as you can in front of large windows facing the sun on those extremely cold days.

Although being outside does not necessarily imply physical activity, it does increase your odds of living an active lifestyle. Wherever you’re sitting reading this article, I encourage you to count the number of video screens in the room. My guess is four or five. Mobile phone, iPad, computer, TV, the list goes on. We are surrounded by entertainment and information to the extent that activity begins to sound unnecessary. Our minds are clouded with information overload. We are simply too entertained and busy to be active. This trend is only getting worse as technology improves. Here are some numbers that demonstrate the results of what we (working adults) deem as appropriate and acceptable behavior by ourselves and those around us.

Unfortunately, half of all children are already obese. Note that the stats for the youngsters was not for being overweight, but obese. The sad truth is that we as parents would rather our children grow up obese then risk going outside and getting a cold. While this thought process may eventually help solve the overpopulation issue, it’s our responsibility as thinking, rational adults to insure better for our families and our bodies.

Is it possible to remain physically fit while indoors? Absolutely. Making a workout at the gym a part of your daily routine is a fantastic idea. The problem is that most people go to the gym and sit on machines or walk on a treadmill while calling it a workout. Going to the gym is not working out. If you are not covered in sweat by the end of you workout then it was not a workout. What I have found in my personal life is that If I add the elements of competition and being outside to my workout I get much more out of it then if I were by myself at the gym.

Physical activity helps people relax and see things in a more positive light. A short term benefit to increasing time outdoors and physical activity is what is known as “runner’s high.” After an intense workout the body releases pleasure chemicals to the brain which cause a deeply euphoric state of being that far surpasses simple relaxation. While this is a short term effect, it serves the purpose of making the transition to an active lifestyle far more pleasurable and compensates for the soreness felt by the paradigm shift.

A more long term effect that will not go away with time is the release of a key protein called BDNF (brain-derived neurotrophic factor.). This protein is correlated with increased long term potentiation and neurogenesis, which is a scientific way of saying strengthened communication between specific neurons in the brain associated with both learning and memory. Think of how this can apply to your professional output at work. I try to workout either before my work day or at lunch. This is because my output potential is greatly influenced by my level of physical activity. Energy drinks are a product of a sedentary world. You will find that an active lifestyle will make breaking free from caffeine addiction possible because there is no drink in the world that will be as effective as simple activity.

The medical community now knows that spinal surgery patients will take fewer pain pill because their pain levels are lessoned by the outdoor healing factor. In fact, one reason why hospital rooms have large windows is because of an older study showing that patients being able to view trees and nature with natural light in the room did much to help in recovery times and mental outlook. Improved mental outlook will lead to recognizing the positive factors contributing to your life.

Next time you feel depressed or overwhelmed about something out of your control, I encourage you to spend time in nature with the goal of personal reflection. Take notice of the people in your life who have been a positive influence. Take time to think about the great qualities in your spouse and the health of your children. Notice these things before it’s too late. Life is a process. We experience many seasons in our lives and if we don’t take time in reflection, then we will never come to appreciate things until they’re gone.

Keep in mind that the physiological effects of being outside, being active and being thankful are tangible and real (though on the cellular level.) They will breed tangible results through your actions and production.

Increasing personal activity will most certainly lead to a better overall mental outlook, which will have a positive impact on many areas of your life. The most important of which is the way that our children are raised. Our results based, digitally dependent lifestyles are making a huge impact on our children. They’re being raised to believe that being obese is normal, living in front of a TV screen is acceptable and broadcasting every aspect of our lives through social media is the future.

This means that with every generation, we are closer and closer to the way that human beings are shown in the children’s movie “Wall-E.” If you recall, Wall-E winds up on a spaceship with the last of the human race aboard and the humans are so technologically dependent that they can’t even stand up. Is this the real future of humanity? Dependency on every level? Whether or not it’s the future for the majority of humanity is irrelevant to you and I. Our future is our own to make. It’s the result of the choices that we make every day. These choices may seem arbitrary at the time, but the consequences will affect the people that we love most, our children.

Editor-in-Chief’s Note: Please join us in welcoming Nick H. as a contributor on ITS Tactical. Nick recently left the Navy after serving for 10 years as a Navy SEAL with multiple deployments, having been awarded the Bronze star for operations in austere environments. Nick’s been with us since the beginning here at ITS on our Advisory Board and I’m thrilled to officially welcome him aboard as a contributor. 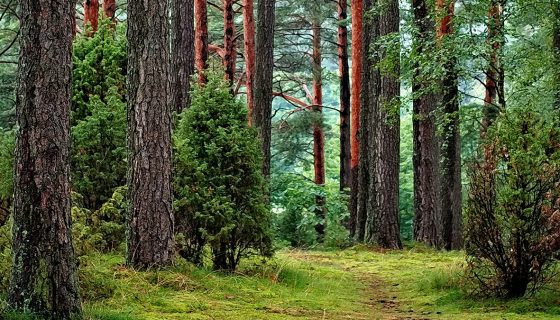 How to Handle Being Lost in the Woods