Escape and Evade in an Urban Environment - ITS Tactical

Close your eyes for a minute and join me on a little adventure… You’re walking down the sidewalk and pass two shady figures talking amongst themselves.

As you pass them, you see the side door of a van open up just in front of you and two more suspicious characters emerge.

Within seconds, you’re restrained and struggling against four people trying to overpower you and throw you into the van.

Now, based on our readers vs. the general population, your response right now is to say “I’d shoot them before they had the chance,” OK Dirty Harry, but now your in a foreign country where your concealed handgun license doesn’t protect you.

Or, you’re in that same foreign country and gunmen jump into your rental car and tell you to drive…

Kidnappings like I’ve described above happen on a daily basis, both stateside and abroad. Did you know that the number two location for kidnappings in the world is Phoenix, Arizona? Kind of alarming, right? #1 is Mexico City, by the way.

Most kidnappings are driven by greed, political power or sex. To sell you back to your family or government, to use you for a bargaining chip, or for young women, it’s to be forced into sex slavery.

Whatever the motive, your window for escape is never better than during the initial incident or transitioning to the location the kidnappers are headed. Once at the location, security will most likely double and your chances of escaping decrease.

Do you know how to escape from handcuffs? How about zip-ties, duct tape or even telephone cord? Could you save yourself?

I recently had the chance to attend onPoint Tactical’s Urban Escape and Evasion class, and put the Houdini-like skills I thought I had to the test.

Kevin Reeve, the founder and director of onPoint Tactical, started the school with the concept of creating a program that taught unconventional skills.

When OnPoint was founded in 2004, Reeve mentioned that there weren’t a lot of places teaching tracking or escape and evasion.

The urban aspect of onPoint’s E&E was created based on an individual’s experience in the IDF (Israeli Defense Force), after serving as a U.S. Marine Scout/Sniper.

He found himself and another team member cut off from their group in the West Bank wearing IDF uniforms. Not knowing anything about how to escape and evade in an urban environment, they took a Palestinian household hostage and called back to base to be rescued.

After discussing this with Reeve, and the general lack of urban escape and evasion knowledge in the IDF as well as U.S. Military organizations, onPoint Tactical’s Urban E&E course was born.

Reeve pulled together a 22 year veteran of the Army Special Forces, and a Navy SEAL to help design the class concept.

onPoint originally only offered the Urban E&E class to Military, Law Enforcement and Contractors, and then came Hurricane Katrina.

While doing contract security work with his partner Kelly Alwood after the hurricane, Reeve saw New Orleans descend in chaos, and realized first hand that we are all “nine meals from anarchy.” After 72 hours without food people will do anything.

Reeve came away from that with the mindset that civilians have every right to attain the skills needed to survive what ensues after three days without goods and services.

Urban E&E is designed to prepare you for those events, as well as traveling domestically and internationally in hostile or permissive urban environments.

U.S. Military SERE (Survival, Evasion, Resistance, Escape) schools teach escape and evasion techniques, but not in an urban environment. Urban E&E differs much more than I ever thought from traditional E&E techniques. 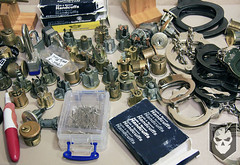 As I mentioned earlier, I thought I had all the skills necessary to escape and evade in an urban situation, but my assumptions were wrong.

Day one highlights included learning about stress inoculation and how to control cortisol levels to deal with the stress of an escape and evasion situation.

The golden rule of training was also emphasized: What you do in training, you will do under stress. Essentially this means that you’ll default to your level of training, which is why you train, train, train!

From there we moved on to situational diligence, or knowing your AO (Area of Operations) and the baseline. Knowledge of the dress, behavior, movement and customs can mean the difference between standing out or blending in.

This is crucial to your survival in E&E, remember back to the IDF example earlier? One of the reasons the misplaced IDF soldiers defaulted to taking hostages was that they lacked the knowledge of their AO and how to blend in.

Caches were also a heavily talked about topic, and the need to have multiple cache locations to store equipment and supplies in advance of E&E situations.

Day two was almost entirely devoted to escaping from illegal custody. We learned how to pick multiple types of locks, single and double-lock handcuffs, break out of flexi-cuffs, duct tape, phone cord and other unconventional methods of restraint.

More than likely in an escape situation, the bad guys aren’t going to use handcuffs. They’ll resort to an alternative means of restraint.

The practical exercise for day two was everyone having a try at escaping from handcuffs while being locked in a trunk. It’s much harder than it seems, and I was impressed that I was able to get out of double-locked handcuffs behind my back. 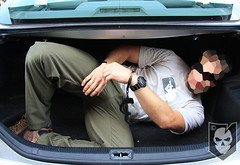 I’d known how to pick handcuffs prior to class, but had never attempted the double-locks while behind my back.

There’s that golden rule of training again, lock picking is a depreciable skill-set and must be practiced! 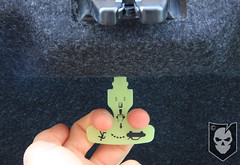 Since 2001, all vehicles have been required to include safety release handles inside the trunk.

This is good to know, because once you escape your restraints, you still have to be able to get out of the trunk.

The FTX on day three was interesting to say the least. The event started with a simulated kidnapping where we were brought in teams of two and three into a secured area, handcuffed, restrained and hooded.

We were required to use bobby pins and other improvised tools to escape our restraints while our captors weren’t looking, gather intelligence on our next objective, and make our way to the first of many pre-staged caches across the city.

The goal of the FTX was to acquire intelligence while we moved to each objective completing tasks, all the while not being spotted and “tagged” by the dozen or so trackers hot on our trail.

Being tagged by the trackers meant being picked up, restrained, interrogated and having to escape again, requiring you to meet your group at a rally point to link up. For the unfortunate amongst us, successive tags meant having the experience of a simulated water boarding in the back of a car.

My battle buddy and I, who were a group of two, managed not to get caught. I felt we handled ourselves very well, but just knowing someone is watching you is difficult to shake. I’m sure we looked ridiculous at times. In fact, I know we did.

We were able to place three caches in various locations the night before with changes of disguise obtained from Wal-Mart. Something I found interesting while shopping at Wal-Mart is that we were able to pick out the Loss Prevention people fairly easily because of what we’d learned in the class.

Our first location was moving around a college campus, so we cached preppy clothing. I must say I probably looked ridiculous in powder blue shorts, a pink polo and white boat shoes and most likely didn’t blend in too well. I also stashed a razor in our first cache and shaved off my beard in a public bathroom while changing.

I don’t know if that helped us not to get caught, but I’d like to think that it at least confused the trackers who knew what I looked like.

Our second cache was in a more urban environment downtown so we opted for hip-hop clothes to attempt to blend in. I chose loud shoes, long basketball shorts, an oversized basketball jersey, sideways ball cap, and big sunglasses. Oh, and plenty of bling!

We completed our objectives and never even had the opportunity to pick up our third cache with alternative-style clothes. With our tasks complete and our adrenaline still going strong, we convened at a local Chili’s for the debrief.

Only a few in the group were unlucky enough to get caught by the trackers during the FTX, and a few had some other interesting experiences. 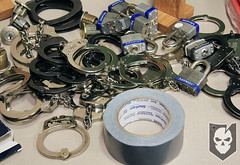 In all, the knowledge I gained in just this three-day course is better than almost any training or education I’ve received thus far in my life.
I truly feel empowered now after leaving the class, and look at the world a little differently…

I’d highly recommend onPoint Tactical’s Urban E&E class to anyone interested in self-sufficiency, and what we’re trying to achieve here at ITS Tactical.

Reeve and his instructor staff were all very helpful, courteous and professional. Their real-world examples of the course content are what made the information stick for me. I wouldn’t hesitate taking another class with them in the future. 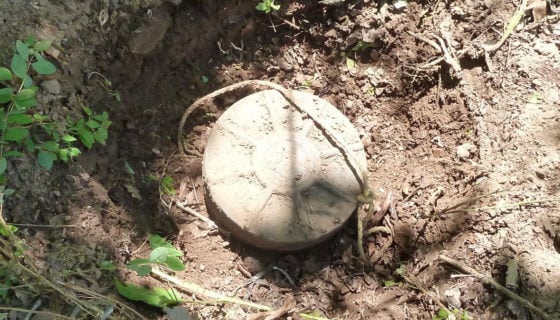 Cache is King: Learn How to Plan and Create Your Own Survival Cache 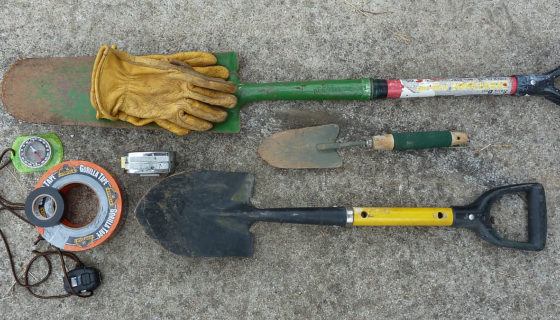 Cache is King: How to Store Weapons and Non-Electronic Equipment for the Long Term 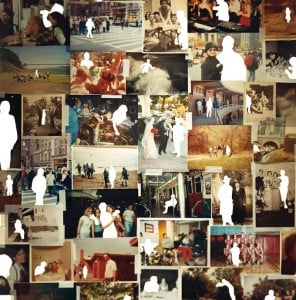