Eric’s been out at the SOMA Convention (Special Operations Medical Association) this past weekend checking out the show and grabbed some photos of the new Combat Gauze XL by Combat Medical Systems.

Despite the increased width of the XL, the vacuum sealed package is the same overall size as the standard MIL/LE package.

No word yet if Z-Medica will be producing an XL version of their Combat Gauze LE (for Law Enforcement and trained medical professionals). Something we commonly get asked about with our ETA Trauma Kits is what the difference is between the MIL/LE only version and the Standard version.

Combat Gauze LE is still Z-Folded, the only difference between the two is that there’s no X-Ray Detectable Strip in the Combat Gauze LE. 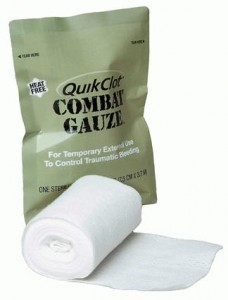