Fog of War: How Would You Respond to an IED Detonation? - ITS Tactical

In light of recent events, I’d like to go over my suggestions for the medical response to an improvised explosive device explosion. As we’ve seen during the past ten years of fighting overseas and recently here in Boston, IED’s are the bad guy’s weapon of choice.

Let’s not forget that this isn’t the first attempt to detonate a bomb in CONUS, but hopefully it will be the last. First of all, I just want to take my hat off to the response to the  attack on Boston. It truly was a best outcome of a horrible terrorist attack on our county. But why did it go in our favor?

The nature of a 26 mile race makes it a softer target. How can you secure that much real-estate in a major city? Anyone who has competed in a marathon knows the number of EMS personal that are used. Having worked major sporting events as a police officer, I know that they pull in every available body they can. You had EMS, local RN’s and doctors all there and ready to help. So what can everyone else do if they are in that situation?

The first thing that needs to be mentioned is to know the enemy’s TTP (Tactics, Techniques and Procedures.) That being said, they often set up secondary devices with the hope of taking out first responders. Take that second to look around the scene, not only for other threats, but to determine ground zero of the incident. Time, distance and shielding goes into play as well. We need to look for the victims that are in the worst shape, not necessarily the ones yelling the loudest.

What should you expect to see if you respond to an IED? Let’s use the injuries from the Boston marathon. Partial or complete amputations, patients near the blast suffered burns which causes a compromised airway, penetrating trauma to the chest wall and lungs. It doesn’t matter if it’s an explosion or gun shot wound, we’ll have the same response. That response that we’ll go over today is MARCH, specifically focusing on the first three issues to address. 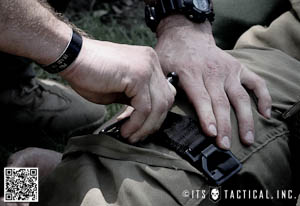 The textbook answer to control bleeding is to activate 911 first and transport to higher medical care. In the real world, massive bleeding needs to be controlled immediately. The ideal way to do this is with a tourniquet.

A pre-manufactured tourniquet is THE BEST TOOL. When it come to massive bleeding from an extremity, you can’t go wrong with a tourniquet. We have massive amounts of data in tourniquet use over the past ten years and it all says the same thing, TOURNIQUETS SAVE LIVES.

Tourniquet placement is crucial, go as high on the limb as you can. It doesn’t matter if its a gun shoot wound or an IED. Bullets and shrapnel can travel and tear flesh up above the apparent wounds.

Remember that arteries are elastic in nature and when severed, they travel up into the muscle. I think this was best shown in Black Hawk Down. Tighten the tourniquet until you see the bright red blood stop. This will be extremely painful and be aware that the patient may try to loosen it to relieve the pain.

If you don’t have a tourniquet it’s OK. A field expedient tourniquet can be made from a piece of cloth that’s two inches wide and a stick to act as a windlass to tighten it. Army cravats are small and work awesome in a pinch.

First thing is to talk to the patient. If they answer, they have a good airway (for now.) If they have a compromised airway, you’ll have to try and open it. Head tilt, chin lift or the jaw thrust. We are also observing the patient as they move to a position of comfort, especially with head trauma. If they need to sit a certain way to breathe, let them.

If you have a Nasopharyngeal Airway and you feel they would tolerate it, then use it. Look for soot around their mouth and nose indicating a compromised airway. These patients can go downhill quickly if unnoticed. They will experience swelling of the vocal cords and eventually will lose the ability to breath on their own. They need ALS (advanced life support) now.

The third thing moving down our MARCH list is Respiration. This area is the neck down to the belly button on all sides. With blast injuries, we’re concerned about penetrating trauma to the lungs and the thoracic cavity. You’ll need to do a thorough assessment if you’re looking for very small shrapnel wounds. More than likely you’ll see no blood coming from these wounds, so use your hands and stretch the skin to expose hard to spot wounds.

If you do find any wounds, you’ll need to place an airtight seal over it to prevent air from entering the chest cavity. Ideally this is a pre-manufactured chest seal like the HALO, but plastic bags will work also. When using plastic, remember to tape off all edges and listen for air entering and escaping from the chest cavity. 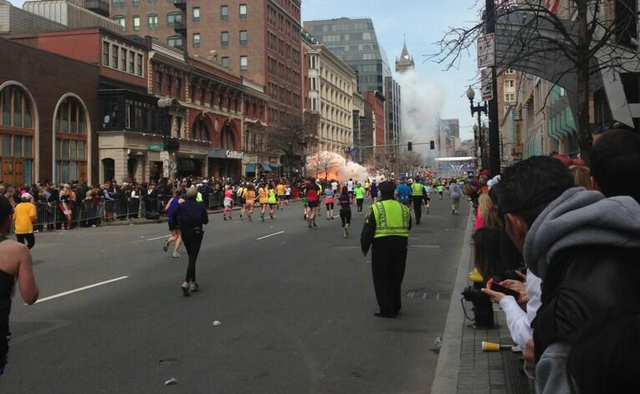 The above picture is to get you thinking. How would you handle a situation like Boston, who would you help first? Events like this will never be a cut and dry exercise. If this would have been your town, how long would it be until help arrived?  Is help coming? EMS protocol is to ensure the scene is safe, before doing anything. Remember that.

Take your fully stocked med bag or kit out of the equation for a moment and think outside the box, “what can I use to treat the injured if I didn’t have my kit?” In care under fire, we only do the M and A (controlling massive bleeding and opening the airway). That will buy you time, so do you go from one patient to another controlling bleeding and managing the airway? I’d say yes. We need to be the most help to the most people. I don’t want one alive patient that is all neat and bandaged up, when I could have performed the important steps for more people.

How would you handle a bystander that wants to help, but may know nothing about a medical first response? While he doesn’t have a clue what to do, give him a specific job as this will allow you to do your assessment.

It’s easy to look at what happened in any situation and say I’d do this, or they didn’t do this. We live in a dangerous world, it could be a bomb in Boston or a shooter in a movie theater. Most people reading this article will have a plan when they sit down in a restaurant. Such as facing the door know and what their best exit is, but that’s where it stops. When the bullets stop flying and the debris settles, that’s when you will understand the fog of war.

Editor-in-Chief’s Note:  Remember, use your best judgement when it comes to responding to a situation. Be an asset and not a liability, get proper training and be prepared. This article should be used to get you thinking, not as a replacement for proper training.

Scott Breuker has been a Federal Agent with the National Nuclear Security Administration for the past six years. He is currently on the Weapon Recovery Team and carries a secondary duty as Team Medic. Prior to that, he served 8 years active duty in the U.S. Army as a Military Policeman. Between the Army and State Department contracting, he has 4 years experience of high threat dignitary protection in 28 countries. 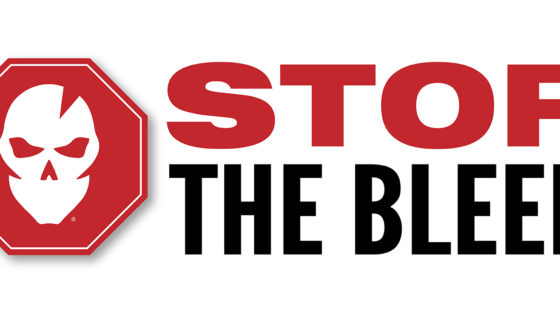 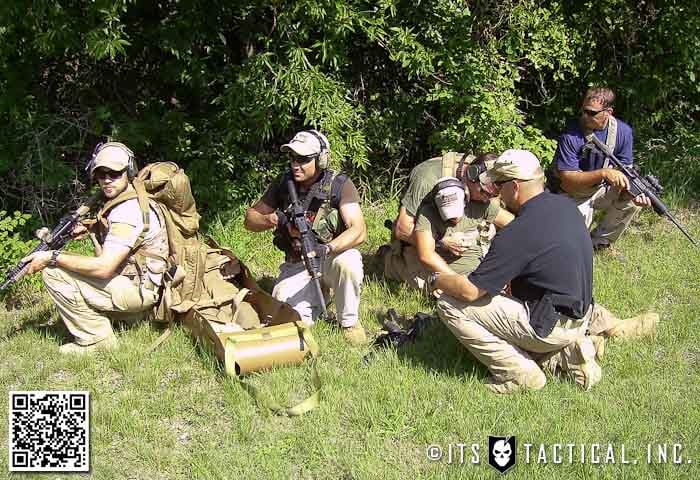 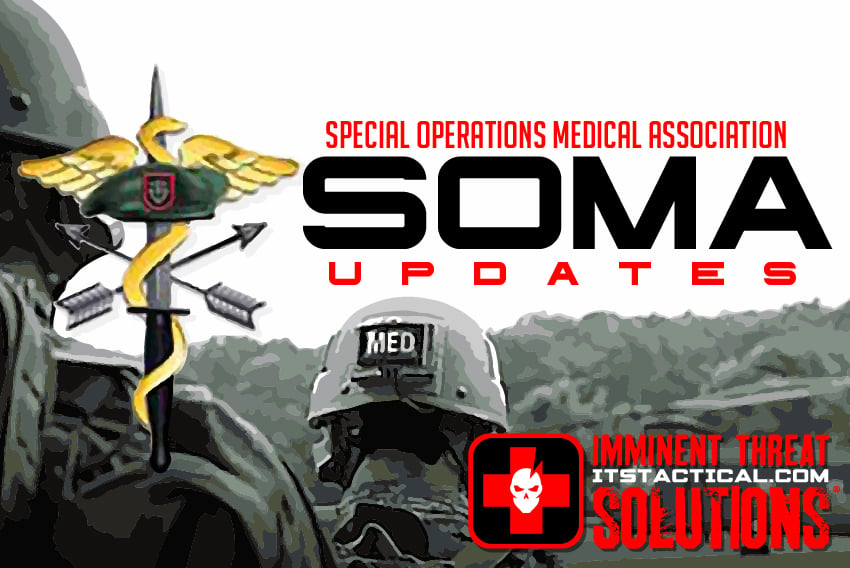 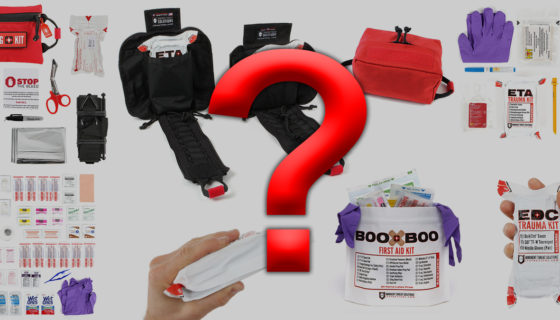 How Many Medical Kits Do You Really Need?