Combatives: Being Multidimensional and Employing the High Ready - ITS Tactical

Combatives is a term that’s currently being thrown around like the word tactical was in the 90’s. So, let’s start by defining combatives; what does it really mean?

It’s an object driven concept where range, weaponry and timing are all interconnected in order to achieve a specific outcome. For example, finding yourself in such close proximity that your primary weaponry are no longer available, or so surprised that you’re unable to employ traditional methods. Knowing how to fight with your rifle in a less-lethal role during situations that don’t meet your force continuum, or lethal force training, also apply here.

Another way to look at it is if all you have is a hammer, everything looks like a nail. A lot of folks try to define it as either being offensive or defensive, but what we’re really talking about is something that’s literally both.

My exposure to combatives goes back to my early Navy days, when we were in the beginning stages of developing our combatives program. I was very lucky to see it evolve over the years and quite proud of the success. In the beginning, my mindset was strictly offensive, I really didn’t give much thought the defensive side.

The work that’s put into developing the proper mindset cannot be ignored. It really is a defining principle; not just lip service, but an integral part. The example I use is one that was taught to me, “you’re about to make entry through this door, on the other side lies pure evil. It is within arms reach, knows you are coming and is stronger and meaner than you. Ready, set; go!”

To mentally prepare for this altercation required winning the fight before I stepped into the room and that was done through fear management. One of the best in the business when it comes to understanding fear management, is my good friend Tony Blauer.

The way Tony dissects the concept so that you can understand the core issue is amazing. While I didn’t know him back then, the principle we used was similar. For me, it was my fear was of letting my teammates down or failing the mission. Once I understood that, it completely altered the landscape.

I expected a battle beyond every doorway and to prepare for it, I hit the door with a level of aggression that would describe as a racecar engine in the red. My engine was revved up and I was ready to fight and exploit everything at my disposal to be victorious. Then, if it was determined that level of aggression wasn’t necessary for whatever reason, it tapered off to normal. The advantages to this mindset were pretty simple, action versus reaction. 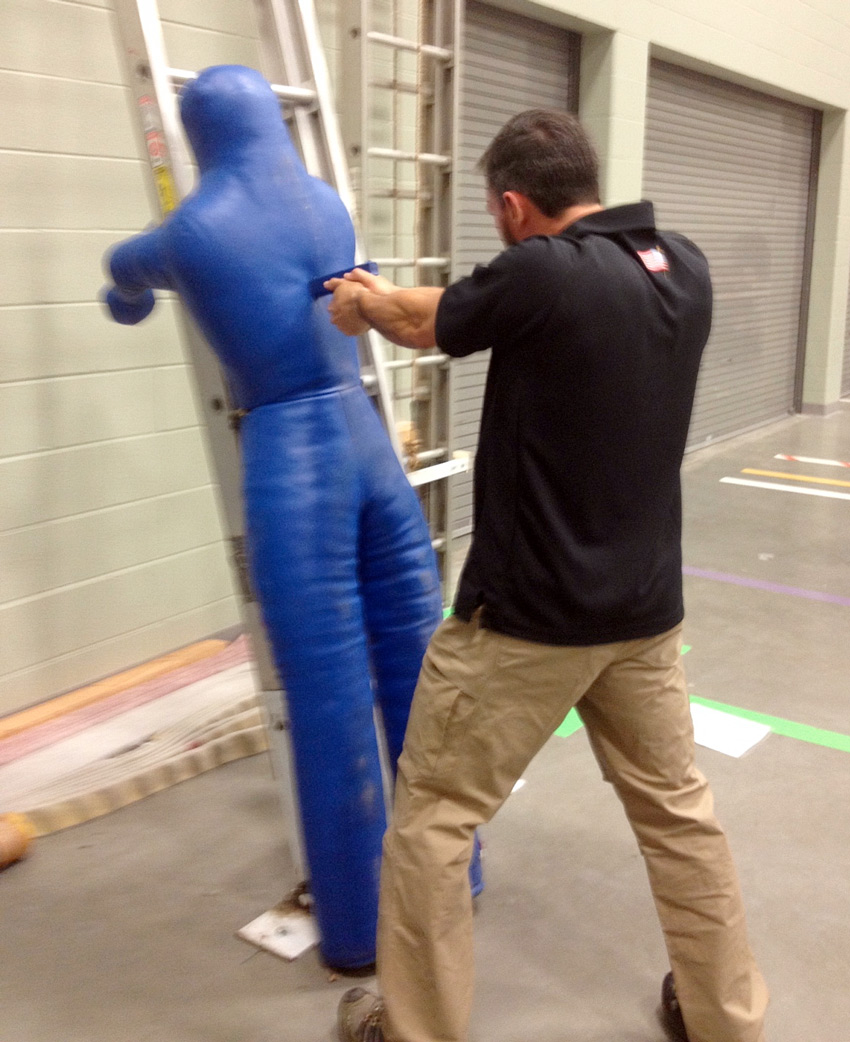 While you may already be familiar with range, or distance, here’s how we look at it. Contact Range, Danger Close and Close Range. Contact Range is the most dangerous, because you’re already within contact or can easily happen; think of bad breath distance. If you can smell it, you’re probably in it.

Danger Close would require quick and sudden movement to be within Contact Range, but your opponent would have to do something first. Close Range buys you just a little amount of time, as they’re well outside Danger Close. As you move through your everyday life, you move through all these ranges with those around you. The ebb and flow is constant, as we’re all social creatures. You can’t have a system that doesn’t anticipate range.

Tools, Weaponry and the High Ready

Starting from Contact Range, you have empty hands, contact weapons (knives & sticks) and ballistics weapons (firearms that launch their projectile). One of the problems I currently see, is not realizing that ballistic weapons can be used as contact weapons. While they’re probably not the best contact weapons; the situation, range or timing could put you in a position where your best option is to use them as a contact weapon. Believe me, it works!

This leads us to a specific point I’d like to make, which has to do with the use of what we call the High Ready. This is a weapons posture that places the firearm at an upward angle, versus a downward angle like the Low Ready. Folks are quick to badmouth it, but I am always leery if they haven’t employed it operationally. This ready position epitomizes everything that I’ve talked about up to this point, but more importantly, it addresses a very serious oversight we see throughout the industry. That oversight is in dealing with unknowns.

People are quick to talk about shoot threats and no-shoot threats, but there’s a grey area in between there that’s referred to as the unknown. For whatever reason, these are not clear shoot-threats or clear no-­shoot threats, hence the unknown status. Things get even more complicated when the unknown is non-compliant. It’s pretty easy if they’re compliant and obey all commands on the spot, but what do you do when they’re non-compliant and not yet a clear shoot-threat? How do you deal with them? You can’t let your guard down and you can’t “tune them up” just on general purpose.

The first thing to mention with regard to the High Ready, is it gives you options; you have lethal force, hard contact (weapon strikes) and soft contact (empty hand) all at the ready. The posture allows the situation to dictate and literally zero hesitation in application.

Not only do you get the offensive side as described, but you also get the defensive side. You’re placing a hard object between the bad guy and your head/brain. How many hits to the head can you sustain and still be combat effective? Imagine stepping into a boxing ring. Where do you want your hands, above the waist or below your waist? The bottom line is how will you protect yourself as you go through the door? As long as you maintain good position and posture; elbows outside 90°, sights level with chin and wrists locked, you’re good to go. It doesn’t take much practice and it’s extremely effective. This is part of the reason it’s been our default ready position for over 20 years.

All fights are different, but some have common factors. We break them down into two types; flash and boiling. A flash happens just as described; you’re surprised. Boiling has cues that if observed, can allow you to avoid, deter or de-­escalate. Let’s concentrate on the flash type scenario, since this is the most dangerous.

I would be remiss if I didn’t at least leave you with a formula for avoidance of a flash event. This formula is ODEX (observe, decide and execute.) Be familiar with your surroundings and the situation; have a short list of options for your decision-­making and then execute swiftly, aggressively and without hesitation. So, if you can’t pick up on the pre-­fight cues, then you must counter quickly with the sole intention of gaining superior position and superior weaponry.

The tools you use to reach the objective vary. They could be some I’ve described earlier, or other system and schools of thought. One of my favorites, I again credit to Tony Blauer, “Closest Weapon/Closet Target.” Understand what you have available, then understand targeting. The point is to keep your objective in mind; superior position/superior weaponry. When it’s go time, you should be prepared to unleash a full arsenal of controlled violence. Additionally, be prepared for injury and focus on the objective. Always work to improve your position (or weaponry) in whatever way possible until the situation is contained, or you’re no longer able to fight.

The key to combatives is realizing that it doesn’t depend on a single idea, such as empty hands. It’s the totality of your fighting ability to include range, tools and timing. It’s the understanding that not only do you have the ability to fight, but the will to fight in order to achieve your objective. The High Ready is a great position to exploit these concepts and it’s been used countless times successfully. In the end, it’s the mindset, preparation and willingness to act that really defines combatives.

Editor-in-Chief’s Note: Please join us in welcoming Jeff Gonzales as a contributor on ITS Tactical. Jeff was a decorated and respected US Navy SEAL, serving as an operator and trainer who participated in numerous combat operations throughout the world. He now uses his modern warfare expertise as President of Trident Concepts, LLC., a battle proven company specializing  in weapons, tactics and techniques to meet the evolving threat. Bringing the same high-intensity mindset, operational success and lessons learned from NSW to their training programs, TRICON has been recognized as an industry leader by various federal, state and local units. Organizations interested in training with TRICON can call 928-925-7038 or visit www.tridentconcepts.com for more information.