Not long after early men hit each other with fists, they picked up the first weapon, a stick.

Typically when I talk about weapon use, it takes the logical progressing of selection, carry, deployment and use. For early man, the idea of selecting the perfect stick was more simplified than it is these days. They had the good fortune of not being subjected to tactical marketing.

I was lucky enough, at least in my opinion, to actually hit people with sticks early in my Law Enforcement career and see what worked and what didn’t. During my career, I carried the Koga Stick, PR-24, and several different size ASPS. Each stick had its pros and cons, mostly due to carry issues. I’ve continued to be a fan of the straight stick, a tool that in my honest opinion continues to be misunderstood, underutilized, and overlooked.

As you read this, please understand that it’s written from my point of view. I’m now retired from law enforcement and this information is for use by anyone, especially the citizen.

My favorite stick is your average plain jane 26 inch Rattan Escrima Stick, which are inexpensive, lightweight and durable. Many people like heavy sticks, not because of actual use, but for the simple reason that they just like them. The rattan is light and responsive and that fits into how I use them. I don’t count on one big strike to stop the action of an attacker, but rather a succession of strikes at specific targets based on human anatomy.

When it comes to carry, we obviously can’t walk around with a stick in our hand…or can we?   When my wife and I go for a walk around the neighborhood, I carry a stick. Where I live, this is more for protection from four legged threats than the two legged variety. In every vehicle I ride in, there is a stick next to both the driver and passenger seats. A stick also sits just inside both doors to my home. You can probably see where I am going with this. 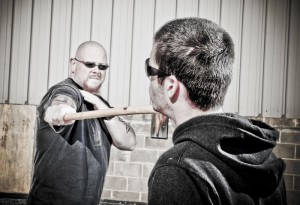 Deploying the stick is pretty straight forward, you simply pick it up. If you give most people a stick and tell them to hold it so that they can hit somebody with it, they will usually hold it up over their head. This position attracts a lot of attention, appears threatening and limits your strikes to the front. Our ready position is with the stick at our side. Because of appearance, many people will totally dismiss this as a threat.

This position allows for a powerful backhand strike that allows you to strike a wide range of targets from your center line to your far right, as if you are confronted by more than one attacker.

Using Combative Anatomy, we attack the target like a machine, first doing damage to systems that stop the threat fast, not kill them eventually. With the stick, you focus on the Central Nervous System (comprised of the brain and spine) and the Structural System (comprised of the bones, muscles, ligaments and tendons.)  For our purposes, we’re going to narrow it down even more to the head, clavicle, elbows, knees, wrists, hands and the ball of the ankle. The idea is to combat failure with redundancy by attacking these targets in rapid succession. 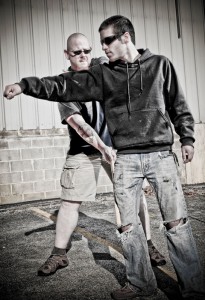 Any strike to the face/head will cause thought pattern interruption. A faint to the groin will cause your attacker to bend forward and bring their hands down to block; this opens the door to a shot under the jaw or side of the head. The anatomical response to this will be their hands coming up to their face; this opens the door to a strike on the side of the knee, or ball of the ankle. This simple combination is likely to discontinue the threat.

Because of reach, the stick excels at defending against a knife. I found this out the hard way after a Taser failure during a SWAT call out. The woman with the knife was at a disadvantaged position (sitting in a closet). When the Taser failed to deploy, I dropped and transitioned to my ASP. Two strikes to her wrist caused her to drop the knife and saved her life.

Sadly, what is taught to most police in reference to stick work is a failure. That is why you have officers striking people over and over again. Police are taught to target large muscle groups. As a rule, edged weapons seek flesh, impact weapons seek bone. Changing this rule for liability purposes, does not change the fact that muscle strikes fail.

For the citizen, it’s important to understand that strikes to the areas previously mentioned are likely to save your life, no matter what stick you are using.

So in closing, I urge you to get yourself a friend and a couple of sticks and have some fun. You can make inexpensive trainers by sliding pipe insulation over the stick and wrapping it in a few spots with tape. By the way, everything discussed here can be done with the open hand using the same principles.