Are Mini Red Dot Sights a Viable Option for Pistols? Jeff Gonzales Joins us for a Q&A - ITS Tactical

I’m excited to announce a new partnership here on ITS Tactical, with Jeff Gonzales of Trident Concepts as a contributor. I consider Jeff one of the top instructors in the firearms industry today and I had the unique opportunity to train under him a few months back.

Out of that opportunity, came the discussion around getting Jeff to share his wealth of knowledge as a former Navy SEAL and respected firearms instructor, with the community here at ITS. 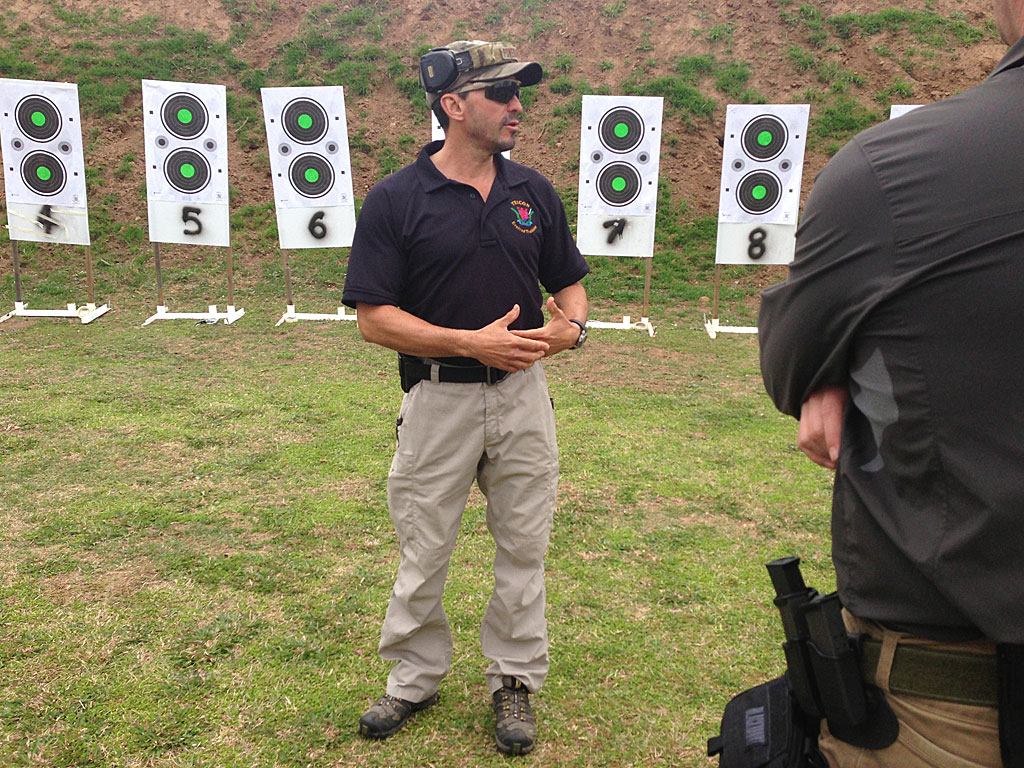 Something that really stood out to me during the course I attended with Jeff, was his usage of a Mini Red Dot Sights on his Glocks. I’ve always been interested to learn more about the “why” of red dots on pistols and was intrigued when Jeff gave a brief on them during class.

I’ve honestly always had mixed feelings on them personally, but I was very impressed with Jeff’s information he presented surrounding their usage. The following Q&A was developed to allow me to share Jeff’s perspective with everyone here and make it a bit easier than transcribing the pages of notes I was furiously jotting down during class, for fear that I might miss some important details.

Q: In attending the Trident Concepts Combative Pistol Course a few months back, I was really intrigued by the Red Dot Sights you were running on your pistols. Can you give us some background on Red Dot usage on pistols and what drew you to give them a shot?

A: Mini red dot sights have been around since the 90s, primarily in the competition arena. They’ve been used by several well-known competitive shooters and slowly started to transition into the combat arena, when we saw red dots on rifles become so successful.

Back in about 2009, our staff was reviewing next year’s involvement with manufacturers to determine who we wanted to assist and impact positive influence with. One of the topics that was brought up was mini red dots on pistols, at first I was against the idea because I didn’t feel that it had reached the level that we needed to be at in both technology, size and supporting equipment. 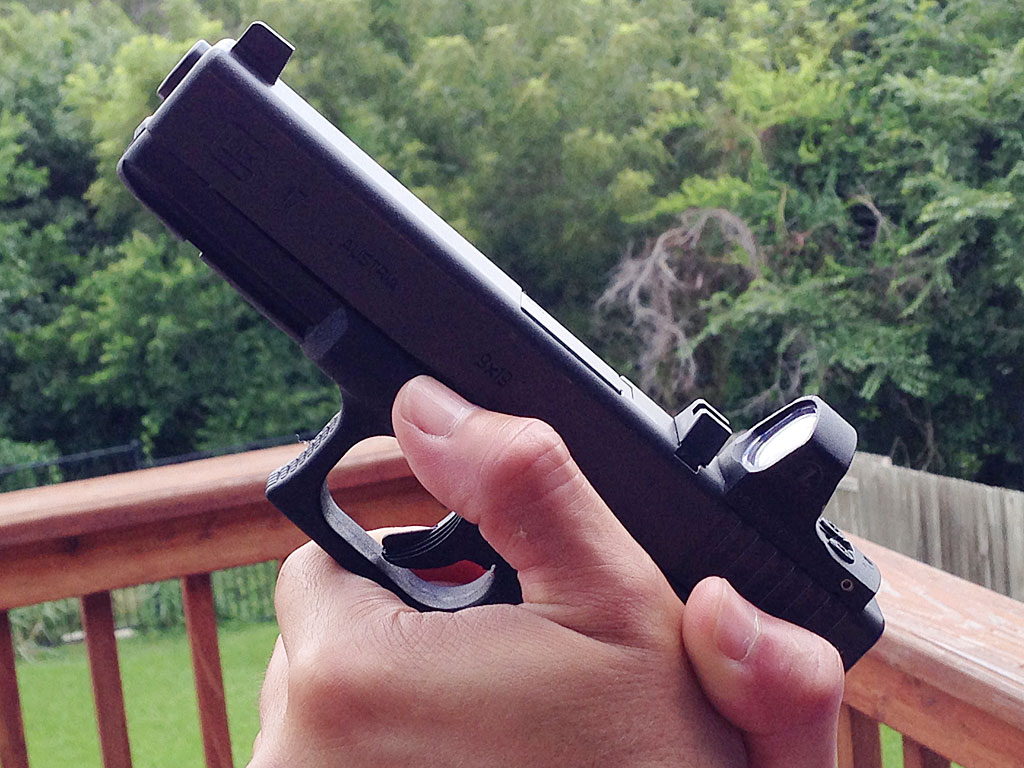 It didn’t take long to see all those items catch-up and I was pleasantly surprised when I had the opportunity to use the first Mini Red Dot, a Leupold Delta Point, on a Glock 17 during a class I did at an indoor range.

Within the first magazine, the concept was validated. The more I used the pistol the more enamored I became with it, I quickly saw not only the effectiveness, but its potential down the road. Shortly after that class we reached out to the industry to acquire our own and put them into service for long-term evaluation. Very quickly it became obvious that we were really going to like this new technology.

Q: In your experience, what are the pros and cons of Red Dots on pistols?

A: So far we’ve identified several pros, which include anytime viewability of the sight, target focus versus sight focus shooting style and binocular versus monocular vision. Some of the cons that we experienced are increased cost for a duty pistol, a commitment to that pistol to ensure functionality and an understanding of the battery life, which for all purposes is quite good. There are a few others but they are more indicative of the red dot sights themselves.

Q: Do you consider Red Dots to be “better” than irons in pistol shooting? How have you seen the adoption of Red Dots taking off in the industry?

A: I do see red dot sights as a huge improvement over iron sights. There are so many positive gains when you moved to a red dot on a pistol. Not to point out the obvious, but we aren’t getting any younger. As we get older and our eyes become more seasoned, positive identification on the iron sights becomes much more difficult. The red dots simply bypass that difficulty and it’s literally like flipping a switch for those who have struggled to see their front sight. 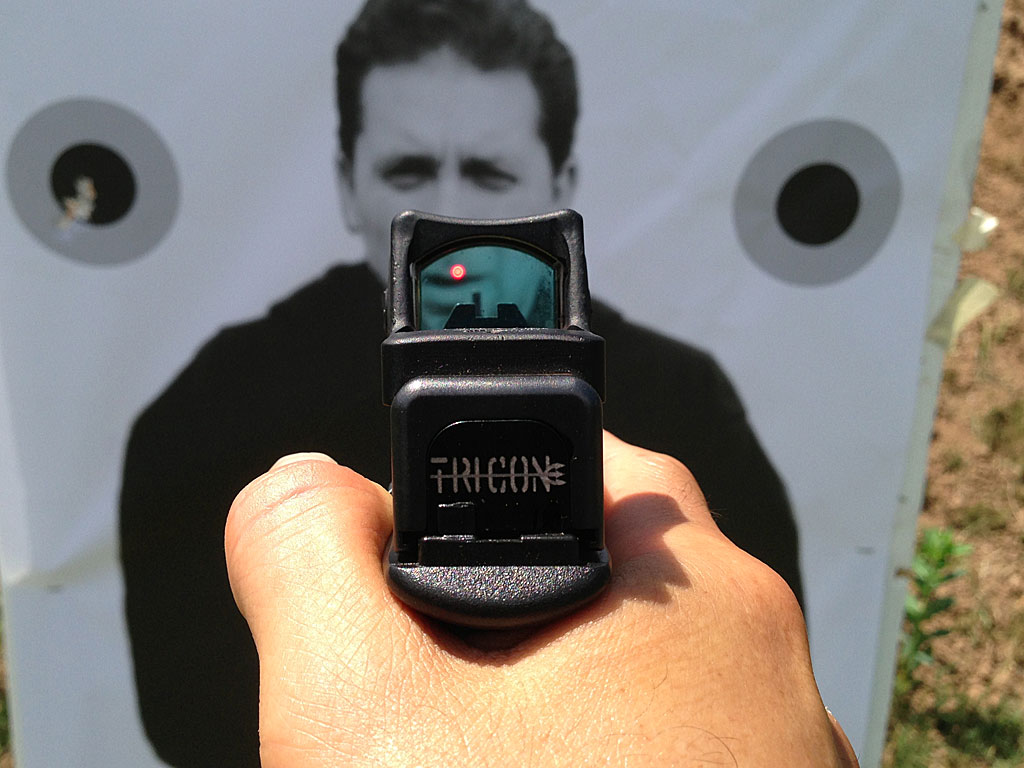 I believe the industry has embraced this new technology and we certainly aren’t going to be moving away from it. It’s just a matter of time before more people recognize the value and start to travel down that path. The industry probably hasn’t responded as quickly as I might like, but as word gets out I’m sure that will spur creativity and manufacturing.

Q: What kind of Red Dots do you recommend for pistols and what led you to these choices?

A: I am still torn between the two big guns, which are the Leupold Delta Point and the Trijicon RMR. In my opinion they both represent the best the industry has to offer at this point. It’s hard for me to pick a clear-cut winner as each has pros the others don’t, as well as cons the others don’t. 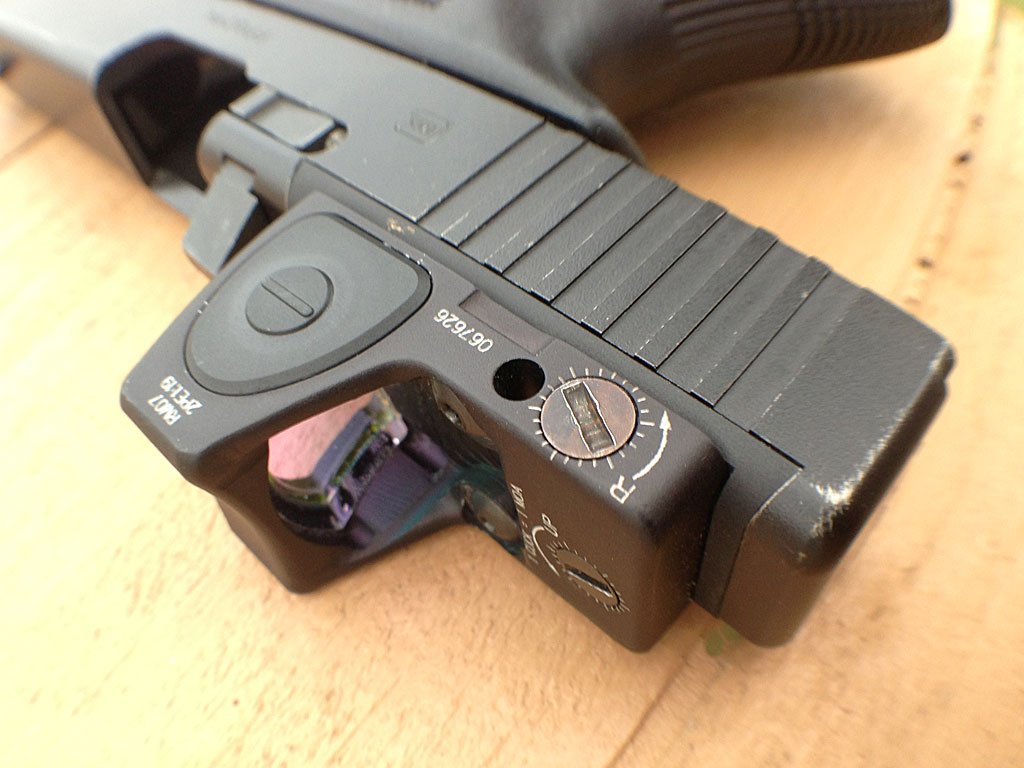 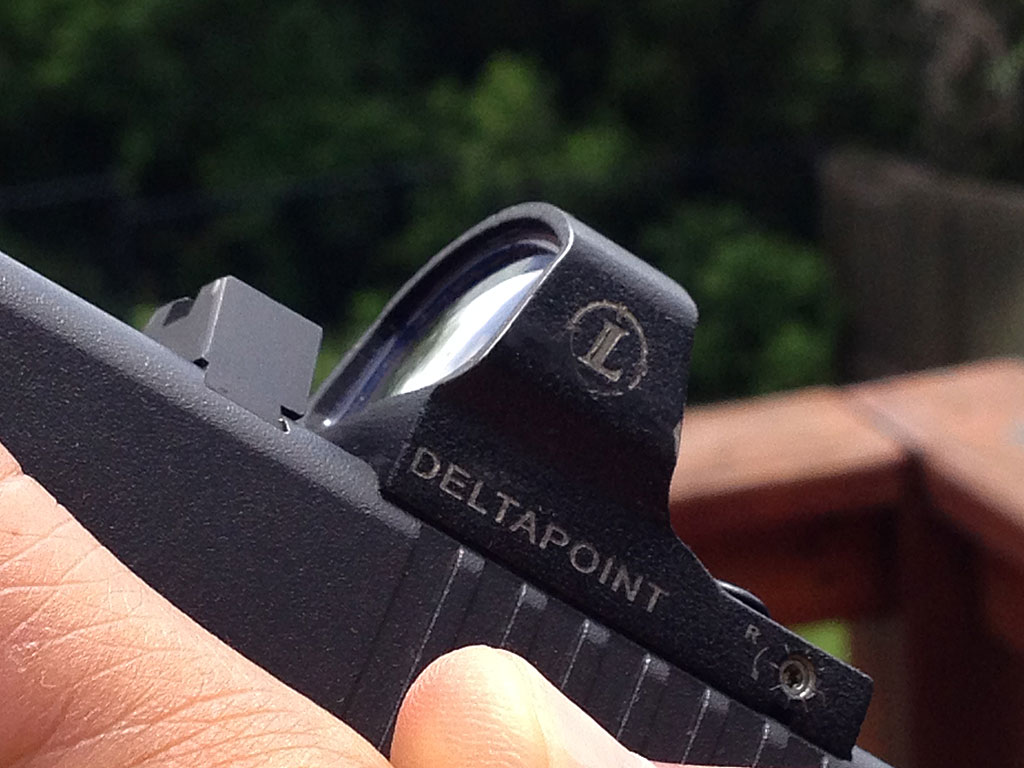 Q: Is MOA on a Red Dot sight an important consideration when making a purchase?

A: Because the engagement distances are so close, in my opinion MOA consideration is less of a factor. The most common sizes are 3.5 and 6.5 MOA in a dot configuration and 7.5 in the Delta configuration. The furthest distance I’ve shot red dot sights on a pistol has been 50 yards and certainly at that distance the smaller size dot is very helpful.

Since most pistol engagements will be well inside of the 25 yard line, I’ve struggled to see a clear leader in the size. My preference is more for the larger. since it is assumed most engagements would be close in nature and the larger dot would theoretically be quicker to pick up. My daily carry gun has a 6.5 MOA as the primary optic.

Q: Along those lines, what methods of attachment are out there and what do you prefer? 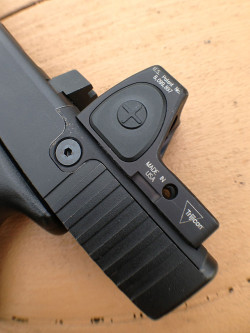 A: As I mentioned earlier, transitioning to red dot sights on pistols is a commitment. The three main mounting options are to utilize a dovetail plate, mill out the slide or mill out the slide to accommodate the Unity Tactical Atom Mount. The dovetail mount is the least advisable since it places the optic much higher making it slightly more challenging to pick up the dot. it also complicates holster selection, considering nobody is making holsters to accommodate this configuration.

The slides that are milled out are very good option, but you must choose which optic you are going to go with. It’s permanent once milled for that optic, so you have to have a good idea of which optic is best going to serve your purposes.

The Atom Mount mills out the slide to accommodate a removable mount that can be switched out for different optics. It’s probably the most advantageous option if you’re not entirely sure on which optic you’re going to go with, or you just want the flexibility to change it out down the road. I’ve been running and Atom Mount on my carry gun and absolutely love it.

Q: If someone is looking to get into a Red Dot sight on their pistol, but doesn’t want to commit to cutting the slide, or is looking for a lower cost options, what would you recommend?

A: The dovetail plates are a good option for those that are not sure they would like the red dot feature on a pistol. While it’s lower cost, it doesn’t fulfill all of our needs, specifically there are very very few holster options available. I’m also slightly concerned that with the larger footprint in surface area, leverage could be applied that could shift the mount in the dovetail.

Q: Something big you hit on with Red Dots, is ensuring that the rear iron sight is placed in front of the red dot, why is this important?

A: We ought to put the backup iron sights in front of the optic for three main reasons. The first is to provide a small degree of protection to the optic. Second is so that both sights are on the same plane in regards to the field of view.

Q: What kind of holsters are currently available for pistols with a Red Dot?

A: From a duty point of view, the best holster out there is the Safariland 6354DO which stands for Docter Optic, which was the first red dot to have a holster designed around it. The holster will accommodate both the Delta Point and the RMR. From a concealment point of view, several companies have started to produce holsters that will accommodate red dot sights. 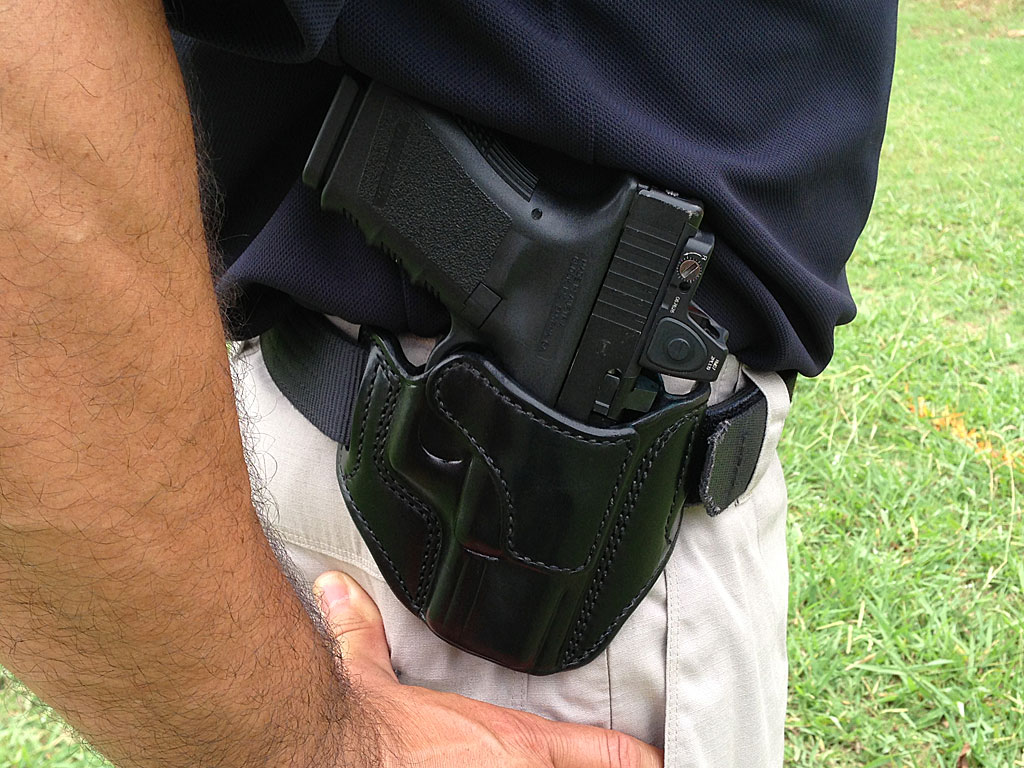 Q: Where do you see Red Dot technology for pistols going in the future? Do you feel there’s any benefit to reducing the footprint?

A: We are already seeing gun manufacturers producing pistols at the factory that are milled to accommodate red dot sights. I see that option increasing as popularity increases. I’ve also encouraged both manufacturers to continue to innovate in their attempt to make the products smaller, lighter and tougher.

We can only hope that we’re not outpacing technology at this point. Many red dots are here to stay and we’ll no doubt see more and more manufacturers recognizing them and putting more effort into accommodating them in the industry.

Please join me in welcoming Jeff to ITS as a contributor, I’m really looking forward to working with him on future articles and excited to share what we’re already collaborating on. 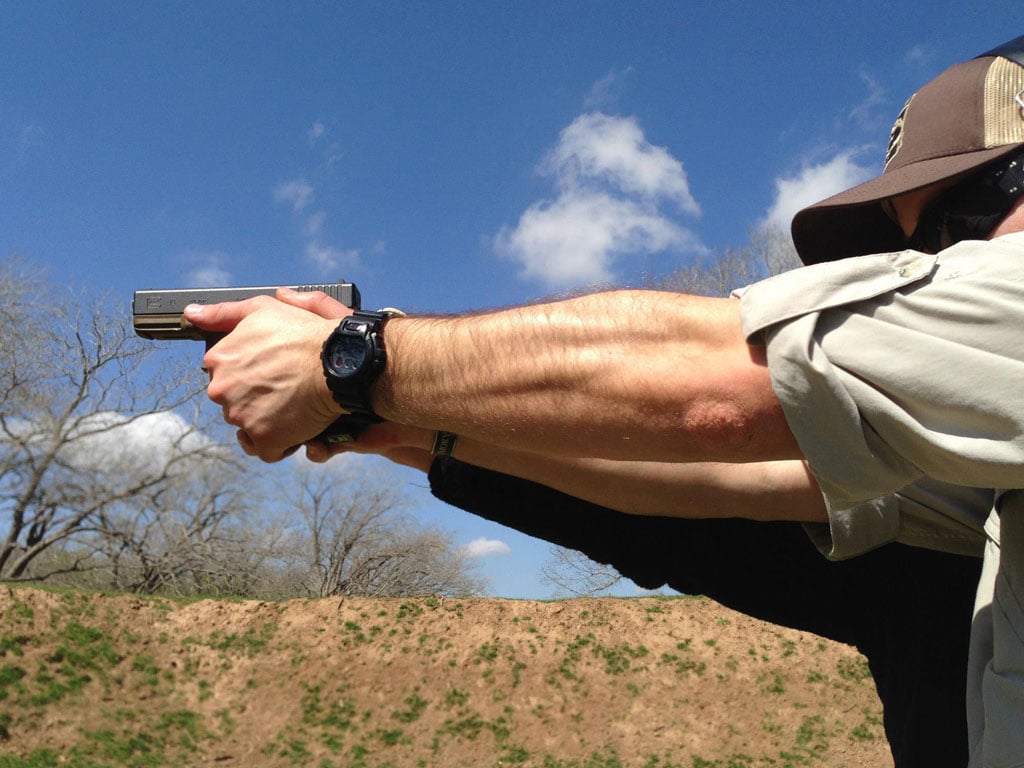 I’ll also mention that if you’re looking for quality instruction, Jeff comes with my highest recommendation. I’m not just saying that for the sake of extra publicity for his classes, I really feel that the course I attended with Trident Concepts was one of the best I’ve ever taken and I came away learning more about myself in regards to pistol, than I ever have in any other course I’ve attended.

US Navy SEAL and modern warfare expert, Jeff Gonzales serves as President for Trident Concepts, LLC. Jeff was a decorated and respected US Navy SEAL serving as an operator and trainer who participated in numerous combat operations throughout the world. Comprising a staff of diverse and professional Naval Special Warfare instructors, this battle proven company specializes in weapons, tactics and techniques to meet the evolving threat. Bringing the same high-intensity mindset, operational success and lessons learned from NSW to our training programs, TRICON has been recognized as an industry leader by various federal, state and local units. Organizations interested in training with TRICON can call 928-925-7038 or visit www.tridentconcepts.com for more information. 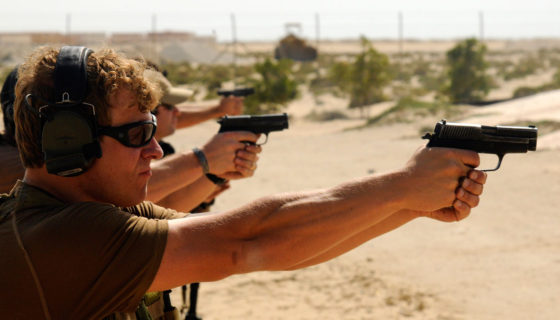 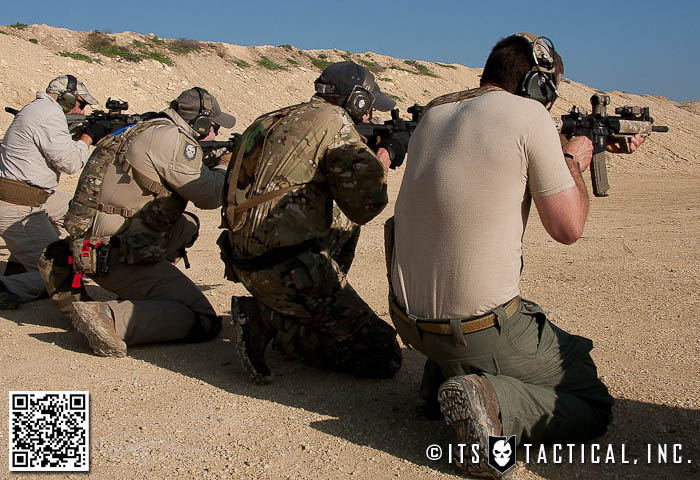