From Company Clerks to Commanders: Why the M-1 Carbine Found Such Extensive Use - ITS Tactical

During the closing months of the Pacific War, the United States introduced Marines and U.S. Army soldiers to a technological marvel; the ability to see in the dark. While this amazing technology was new, it was married to a very common firearm that had entered World War II as an alternative to the GI .45-caliber pistol.

Dubbed the T-3, this new system was a variant of the M-1 carbine married to an infrared spotlight and an early form of a passive night vision scope. It was heavy, awkward and had a battery with the size and weight of an anvil. However, it worked. That’s just one example of the legacy of the M-1 carbine. It was never intended to be a main battle rifle, but it did everything fighting men asked it to do. 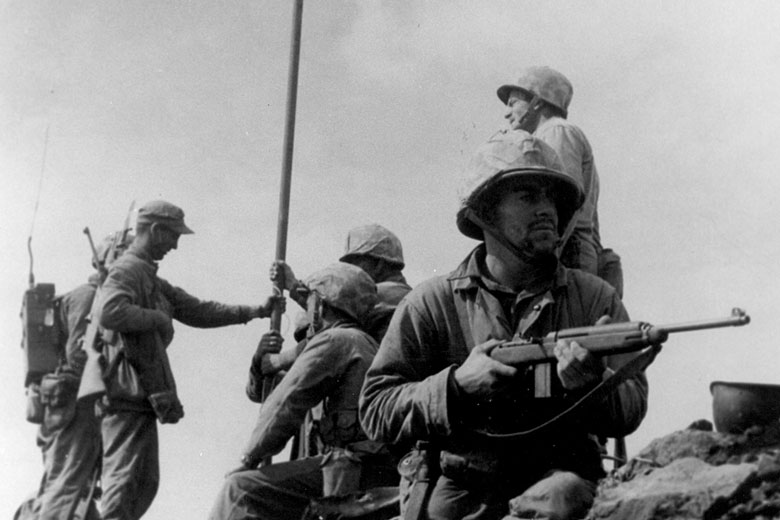 Long overshadowed by the iconic and heavy-hitting M-1 Garand, the M-1 Carbine began its existence in 1940 when the Secretary of War issued orders for the development of a lightweight and reliable “intermediate rifle.” Millions were produced during World War II, a stunning testimony both to the industrial might of our nation and the innovation of the design. In short, this handy firearm remained relevant even during the age of the Kalashnikov.

In Vietnam, even though thousands of the new M-16s had been issued to U.S. troops, including the Special Forces in 1964, many Green Berets preferred the M-1 carbine; the weapon of their fathers’ wars.

What’s more, by that time many of the Viet Cong were almost certainly wielding the more modern Kalashnikov rifle. As for the Montagnard tribesman Green Berets trained and led, they can be clearly seen in photographs of the times carrying some of the 800,000 M-1 carbines the U.S. sent to South Vietnam.

Although developed to replace the venerable M1911 pistol, (Army brass thought a carbine would be easier to shoot) other factors convinced the War Department to develop the M-1 carbine. The success of the German blitzkrieg in 1939 had convinced the Army that rapidly deployed maneuver forces, such as airborne soldiers or armored columns, could punch through front lines and endanger support troops.

In theory, the M-1 carbine was never intended to replace the Garand as a battle rifle, but was supposed to arm cooks and clerks. “It was a compromise,” said Doug Wicklund, senior curator at the NRA National Firearms Museum in Fairfax, Virginia. “They called it the “war baby,” the younger sibling of the Garand and it was for soldiers who were not on the frontline, something that they would have a better chance of hitting the enemy and defending themselves with.” 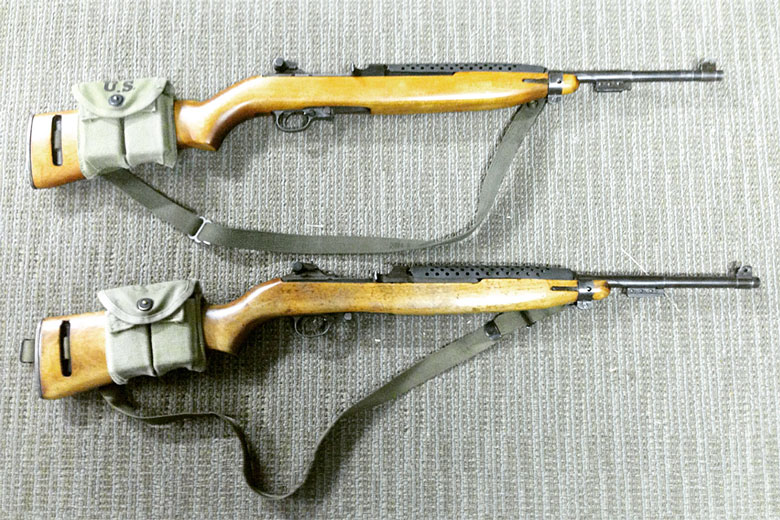 Two M-1 carbines from the author’s collection that are restored to their Korean War-era configurations. Photo by Paul R. Huard

By 1943, up to 40 percent of some infantry divisions were carrying the M-1 carbine as their primary weapon, according to The M-1 Carbine, Leroy Thompson’s history of the weapon’s development and use.

“It was an easier gun to carry than the Garand,” Wicklund said. “It was shorter, it was lighter, it was reliable, it was easier to shoot, easier to clean and it had a 15-round magazine. It was easy to tape two magazines together and get 30 rounds to fire. Stopping power was not there with the carbine, but you could fire it more times.”

We had it in inventory. They were everywhere.

Once the United States entered into World War II, the Army issued contracts ramping up production of the M-1 Carbine. Eventually, more than six million of the weapons in both semi-automatic and select fire poured out of factories; two million more than the number of Garands produced during the war.

Winchester was initially a leading producer, but as American companies turned to war production, Inland Manufacturing (a General Motors division and producer of a majority of the weapons), National Postal Meter, IBM and even Underwood Typewriter Co., cranked out hundreds of thousands of the carbines. During World War II and the Korean War, it was completely possible for the Army to issue a company clerk an Underwood Typewriter and an Underwood M-1 Carbine.

When German troops received the history-changing MP 44 Sturmgewehr, the Wehrmacht put increased firepower into the hands of small units that could direct fully automatic fire at U.S. troops with a rifle. The M-1 Garand, hard-hitting as it was, carried only eight rounds to the MP 44’s thirty, contained in a detachable box magazine.

As a solution, Inland Division produced 570,000 M-2 select fire carbines. The weapon featured a selector switch on the left side of the receiver and could hold a 30-round box magazine. It wasn’t a Sturmgewehr, but it was available. “The U.S. has always used what it has already,” said Wicklund. “We had it in inventory. They were everywhere.”

The Night is Dark 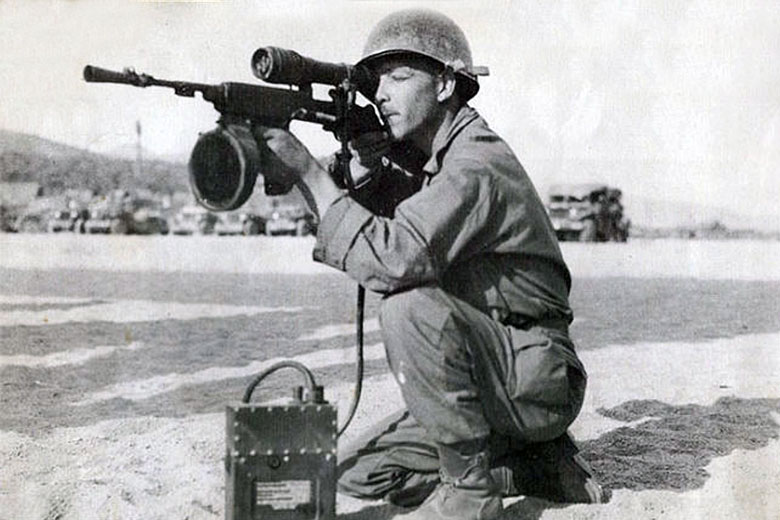 The T-3 Sniperscope system, which used a variant of the M-1 Carbine. U.S. Army photo.

During the same year, arms makers designed the T-3 to take advantage of the first U.S. night-vision gear. The “Sniperscope” was used by Marines against the Japanese on Okinawa, leading to one out of three enemy soldiers killed by small arms fire dying because of the carbine’s prowess as a night-fighter’s tool.

The Electronic Laboratories Co. developed active infrared night vision in the form of the Sniperscope, a 20-pound package of telescopic sight, infrared flood light, image tube, cables and powerpack. The scope had a range of about 70 yards and could be mounted on either an M-1 or M-2 carbine.

The system not only saw action in the Pacific Theater during World War II, but also widely during the Korean War. For example, Marines using carbines with the Sniperscope would fire tracers down on the positions of North Korean and Chinese troops mounting night attacks, so machine gunners could target the enemy with heavier fire.

In conclusion, the M-1 Carbine is so frequently described with words such as “handy” and “reliable, that it’s apparent that it was in the right place at the right time. One of the reasons it was selected as the weapon of choice for the Sniperscope, was the technological marvel’s weight and bulk. The lightweight M-1 Carbine kept the weight penalty on an already heavy weapon system to a minimum; a boon for the GI who had to slog the battlefield with it. 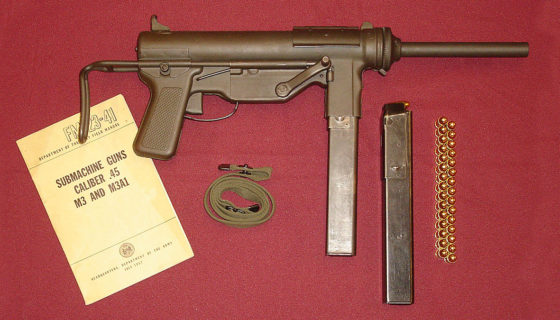