You Want Me to Do What with My Finger? - ITS Tactical

Editor-in-Chief’s Note: Please join us in welcoming former Navy SEAL and current Director of Training at Center Mass Group, Chris Sajnog as a contributor on ITS Tactical.

Imagine if there was a law that all car seats had to be set to the same distance from the steering wheel. It didn’t matter how tall you were, your body shape or if your arms looked like you came from Planet of the Apes — You will keep that seat in the same position!

OK, wait…if it’s a manual transmission you can scoot a little forward, but for automatic slide that seat back to the approved seat-length.

Sounds strange? Of course it does; but why doesn’t it sound strange when a firearms instructor tells you the “law” about where you need to put your finger?

Think about all the different sizes, shapes and strengths of our hands. Looking at the finger joints alone of any group of shooters and you’ll see they are in different places. How can they ALL put their finger on a gun in the same place and be expected to shoot well?

Now think about all the different sizes and shapes of handguns out there and we’re all going to put our finger in the same place? Oh, I forgot, on a revolver we all need to switch to a better place!

I know this is going to upset some people. For over 20-years I too have been told exactly where to put my finger on the trigger and when I first started instructing I was regurgitating the same company line that I was told.

It took a while but I finally took off my blinders and realized you shouldn’t adjust 99% of where your hand comfortably contacts your gun so that 1% goes where it said in a book.

Give Your Instructor the Finger!

Actually he’ll need to give you his finger if he’s telling you where you need to put it on the trigger. Your hands are not the same as his (go ahead, look!), so you may need to put your trigger finger somewhere else.

When you start key-holing shots, I’m sure he’ll be fine with it. To shoot effectively you first need to establish a good grip. Get high up on the tang with your firing arm straight behind the gun to control recoil, and then wrap your fingers around the grip.

Shooting is all about being relaxed and you can’t be relaxed when your hand is contorted around the gun in an effort to put the tip of your finger where it works for someone else. Finally, to make sure you press the trigger straight to the rear so you don’t pull your shots.

Here’s a sniper trick I learned years ago: Keep your 2nd knuckle (the 1st one on your finger) pointed straight at your target as you press the trigger. By doing so it’s nearly impossible to push or pull the shot with your trigger finger.

I’ve used this technique to improve the shooting of many students over the years and if you’re contorting your hand all in the name of finger placement, I know it will help you too. Give it a try next time you dry-fire (you do dry-fire, don’t you?) and then try it out on the range. Feel free to send thank you notes.

Editor-in-Chief’s Note: Please join us in welcoming Chris Sajnog as a contributor on ITS Tactical. Chris is a former Navy SEAL and the Director of Training for Center Mass Group, started by two retired Navy SEAL Instructors. Giving people the experience of being trained by the most elite combat unit in the world, Chris is currently a Maritime-Counter-Terrorism and advanced marksmanship Instructor who has trained DOD, DHS, FBI, CIA and multiple foreign allies in all aspects of combat weapons handling, marksmanship and Maritime Operations. 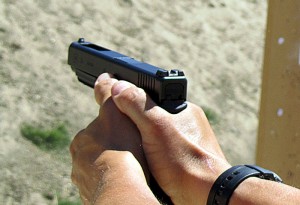