Accidental Marathon: Rollerblading My Way Into the Dad Hall of Fame - ITS Tactical

Accidental Marathon: Rollerblading My Way Into the Dad Hall of Fame

Accidental Marathon: Rollerblading My Way Into the Dad Hall of Fame

A few years ago, my wife and I spent about a year in Montana. We had two kids at the time, ages three and one. My wife had a lifelong dream of running a half marathon that she was wanting to fulfill, but neither of us had been running as part of our workout routine and she had a long way to go. I had a long way to go as well, but didn’t share the same passion as she did and I’ve always hated running. So while I wasn’t going to run the half marathon, I did want to support my wife in whatever way possible.

The best way to support a mother is to offer to watch the kids. That’s the single most helpful thing a father can do for a mother, besides maybe the dishes. However, I wasn’t satisfied with merely watching the kids, I wanted to take on a bigger role. So I decided to pull out an old skill-set that I hadn’t used for some time. One that I’d developed in my younger years and was actually quite good at. This is a skill that isn’t always popular through the lens of social convention, but that didn’t matter; I was helping my wife. 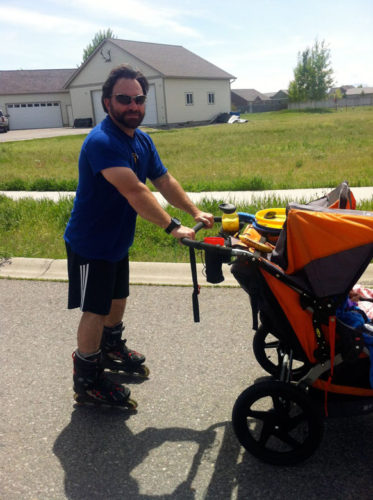 I went to the sporting goods store and after careful selection, bought a pair of rollerblades! That’s right, a beautiful pair of K2 inline skates. I was so excited because I finally found an excuse to do it. Of course, I’d also be playing the martyr card in an effort to garner public support for the idea.

“It’s the perfect idea,” I thought, as I prepared the double stroller for action. The kids would sit in their respective seats, tied in for safety. I was, after all, going to be flying down the road at break-neck speeds!

I fastened a bluetooth speaker to the crossbar and found the perfect internet radio station. Me, my wife, two kids and Marky Mark and the Funky Bunch were about to kick some serious ass!

My wife, being the good sport that she is, humored the idea. We set out on a long run, or in my case, a roll. The area of Montana we were in, sat deep in the valley, so there weren’t many hills; it was perfect. The kids loved it, admittedly not as much as I did, but they looked forward to the runs.

In training for the marathon, my wife’s runs became longer and longer. We’d park in town next to a good restaurant and then take off on a big loop that ended back at the car. The reward for our troubles was an awesome cheat meal. We were both burning calories and hey, we deserved it.

Race day finally came. The plan was to drive my wife to the buses, so that she could catch a ride to registration, while I took the kids to the starting line to watch their mom be awesome. On the way there, I stopped at a convenience store because it was early and I needed a pick me up. I grabbed a frothy mocha frappuccino and smoked a cigar while the kids rested in the car. After I was done, I loaded up the kids in the stroller and walked to the starting line.

The place was electric. Speakers were blaring music while the participants warmed up. It felt more like six in the afternoon than six in the morning. I was so moved by the energy level that I couldn’t help but think about how I had the kids in the stroller already. 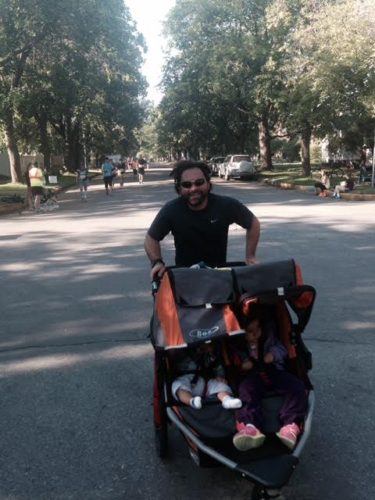 The stroller was prepared and guess what? My rollerblades were sitting in the lower stroller pouch, beckoning me to put them on. Unregistered, untrained and perhaps unwanted, I set up my rollerblades and prepared for total domination! I would support my wife by working as her pit crew. I could carry her energy gels and water while providing her with the soothing sounds of Marky Mark. Yes friends, it was indeed perfect.

Fireworks went off as the starter pistol fired, signaling the beginning of the race. I was unable to strap on my roller blades because of the sheer number of people. Instead, I would blend in with them, run for a mile or so then pull over to don my skates of steel.

So I ran. The road was packed and I ran some more. It would clearly take more than a mile. Towards mile two, my wife asked if she could run ahead, unencumbered by the stroller. I told her I’d easily catch her once the crowd thinned and I could strap on my blades. In truth, I have to say I was relieved.

Remember that cigar and frappachino I’d unknowingly enjoyed not an hour before? Yeah, milk was a bad choice! My stomach gurgled with furious anger and bellowed as if to warn me of the carnage to come. Moments later, it did. On the road; with runners all around and my kids watching.

I needed to put some distance between myself and ground zero, so I ran. To my surprise, I felt much better. It was a slight downhill and the weight of my stroller was carrying me and my stomach felt the sweet release of emptiness. With another mile gone, I waited for my moment.

I was running an f***ing marathon!

The people were still crowded together and there were pit stops everywhere with security placed intermittently. I couldn’t help but think that when I strapped on my blades I might be asked to leave, or even chased. What kind of example would that be for the kids? So I decided to wait another mile or so until it thinned out even more.

At the pit stops, the helpers would see me pushing two kids in a stroller and yell amazing things to me. They shouted, “super dad!” “You have some lucky kids,” one yelled. This became the norm. Even other runners would say encouraging words to me as they passed.

I realized something amazing in that moment, I had fans and they loved me. So I ran. I couldn’t let my fans down after all. They needed me and I them. Indeed, it was around mile 7 when I finally realized that I was running an f***ing marathon! Well, half marathon.

Pushing the stroller filled with water, needless equipment and two kids, I pushed on. The energy of the event carried me forward. I wasn’t even in pain until about mile eleven. People who train for marathons refer to something known as “the wall.” For runners, this tends to happen around mile 20. 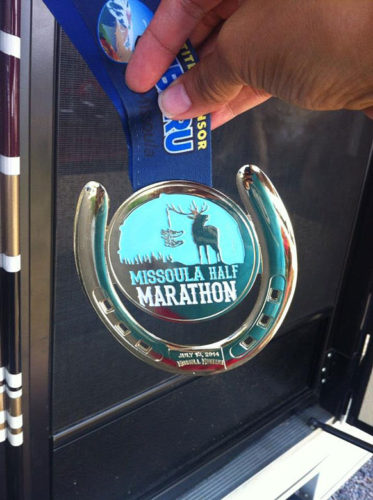 For out of shape fathers pushing strollers in Montana, I can honestly say it happens much quicker. My pace slowed and my feet got sloppy. They began dragging and felt like cement. I pushed on and dug deep. My heart lifted when I finally saw the finish line ahead.

There was a bridge that went over the city and the large finish line was just past it. I could hear bands playing music and an announcer saying everyone’s name who crossed the finish line. This was made possible because at registration, participants were giving trackers to put on their shoes. I of course, was not an official participant and had no such tracker.

As I approached the finish line I heard them say the name of the person to my far left side. Then another name to my immediate left. Then the announcer simply said, “and to the far right we have…” crickets. They knew. The truth is, when you’re as completely decimated and exhausted as I was in that moment, you really don’t care what anyone knows or thinks.

I saw a woman handing out finisher medals and I went straight up to her, bowed my head like Lancelot after a joust and she placed the medal over my head and said “Congratulations, you super dad.”

In that moment something swelled in my heart. I felt butterflies in my stomach and it could have been pride or a sense of accomplishment. In the next moment, it felt more acidic as my body felt hot. Not a few seconds after the woman placed the medal on my head, I hurled. All over the road by the finish line. It wasn’t just once either.

All in all, I’d lose my stomach three more times that morning. If there’s one thing I learned, it’s that people are forgiving of a father who goes the extra 13.1 miles for their kids, rollerblades or not.

Editor-in-Chief’s Note: Nick recently left the Navy after serving for 10 years as a Navy SEAL with multiple deployments, having been awarded the Bronze Star for operations in austere environments. Nick’s been with us since the beginning here at ITS as a Features Writer. We’ve also featured this story on our Podcast, Ridiculous Dialogue and it was forever immortalized in Ridiculous Dialogue Illustrated No. 2, which we’ve conveniently listed below for your viewing pleasure. 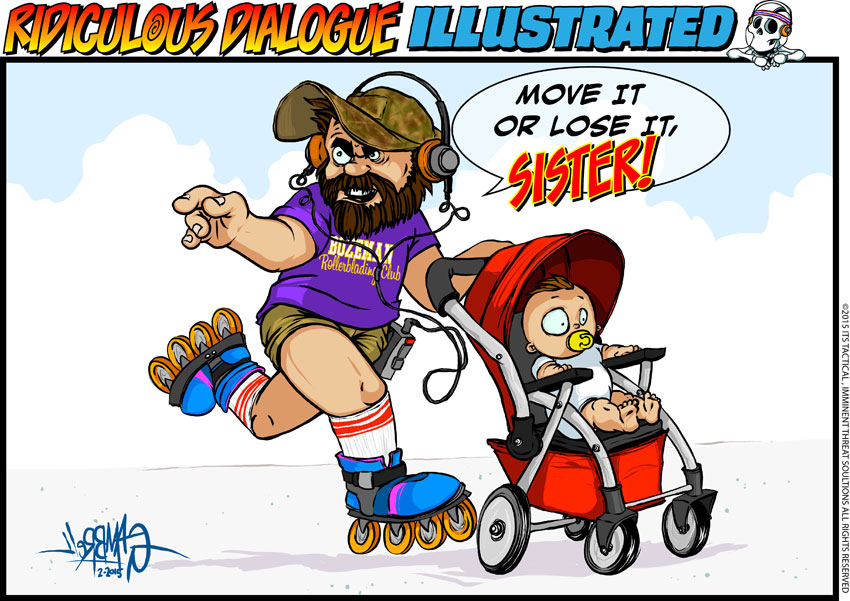 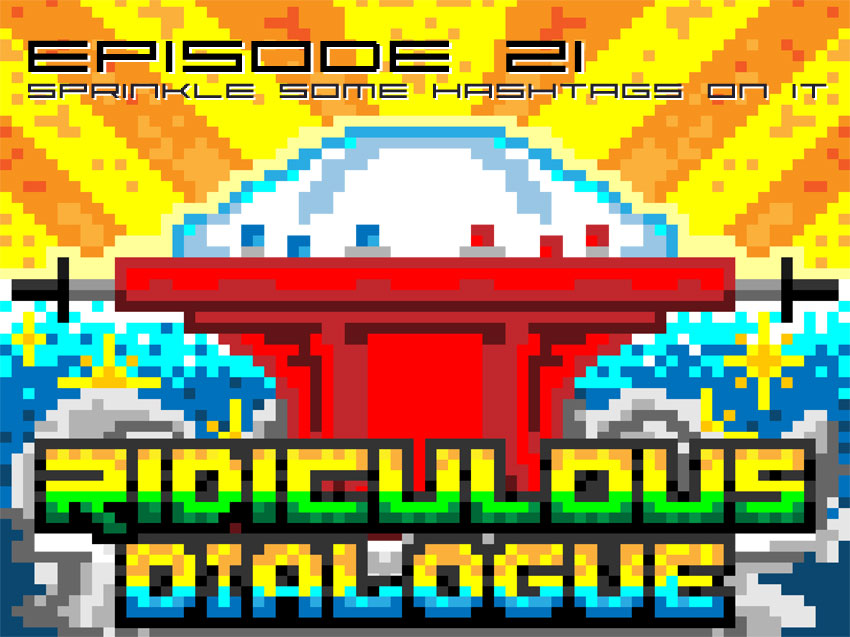 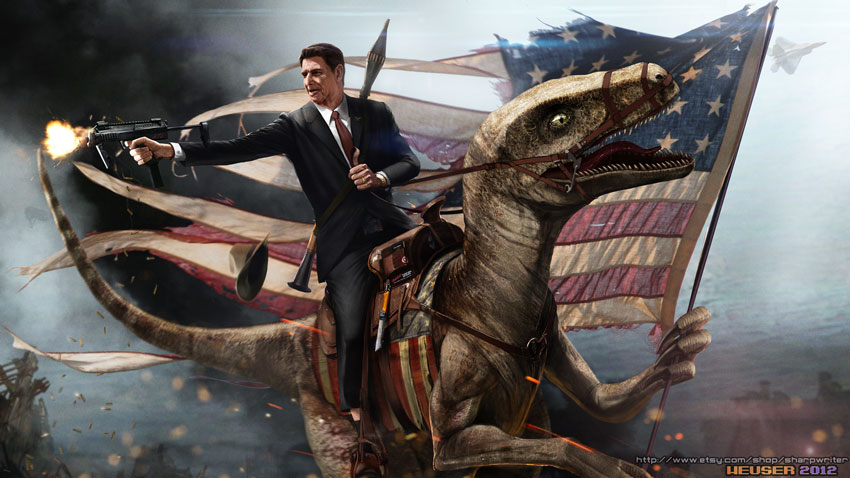