We’ve put together all the great entries from this year’s Tactical Snowman Contest and chosen a winner.

Before we announce the winner, we’d like to mention that we’re also giving Jeremy Bishop a runner-up prize of a $25 gift certificate to the ITS Tactical Store for his snowman shown to the right at Bagram Air Field in Afghanistan.

It was really hard to pick between Jeremy’s and our Winner! 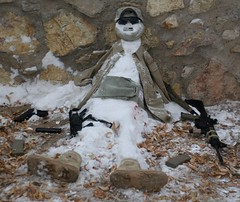 The winner of the 2nd Annual Tactical Snowman Contest is Kevin Zuniga with his “Hard day at the office” snowman and awesome story that he wrote to accompany it!

Dave’s Tahoe took an RPG to the rear end, flash burning half his team. Dave fought the blaze down and pulled his men out… he knew he’d have to do this alone. With the comms down and all their gear destroyed, Dave pulled out his DPMS and what mags he could find that weren’t melted down and began the arduous task of finding help.

Dawn was drawing near, the snowfall was coming down enough to mask his tracks; he’d have to remember the way back… somehow. Dave moved through the woods, the North Star his guiding light was almost gone, he’d have to find the base, he’d have to survive.

*snap*snap* “What?” That unmistakable sound of rounds closing in, someone wanted him dead, but he wasn’t willing to give up without a fight.

He’d have to find some sort of shelter, some cover, something to give him some hope of taking on this threat alone and living through the night. Then in the distance, a wall… Some stone fortification, that could be the key!

“AAAAGH!” Suddenly things went black, a loose round caught him in the back… had to have been a large caliber, the exit wound tore him up pretty good.

Alone, and with only a few mags and some basic medical supplies on him, Dave quickly wrapped an Israeli Dressing around his stomach, holding in his guts, then found a place to make his stand.

Great story Kevin!!  Thank you to everyone who got out and built a Tactical Snowman this year! Start planning yours out for next year’s contest, as we’re already putting together a great prize package for it!

Jeremy and Kevin, keep your eyes peeled on your inboxes with details on claiming your prizes and don’t forget to check out all the awesome entries below! 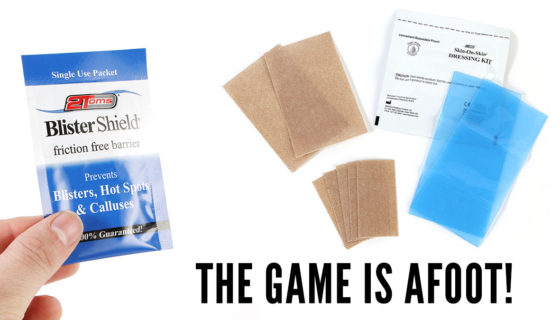 Prevent Blisters with New Foot Care Items In the ITS Store and Grab a Patch for Free!