Propper International and Digital Concealment Systems have recently issued a press release on the details of the upcoming A-TACS ACUs and we’d like to share some exclusive photos with you guys.

During our last Camo Comparison, in Big Bend National Park, we were able to test out the Propper A-TACS ACUs and see for ourselves how effective they were in that environment.

We’ll let the photos below speak for themselves, but we feel A-TACS did very well and is definitely a solid option for arid environments. 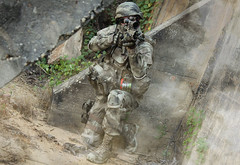 We’ve had one of the only six test samples of the Propper A-TACS ACUs now for about six months and are pleased to say they’ve been holding up extremely well. They’re sewn to military specifications and made from 65/35 poly/cotton ripstop fabric.

While our photos show an A-TACS boonie hat, these and combat shirts will be released as Propper advances the A-TACS product line.

A-TACS has done a great job integrating their pattern with well known manufacturers to produce a true head-to-toe concealment system. Along with the uniforms from Propper, they have boots from Danner, packs and nylon kit from Tactical Assault Gear, slings from Blue Force Gear and weapons and optics systems from Remington, Bushmaster and Bushnell.

Get your Gear Dipped in A-TACS Camouflage 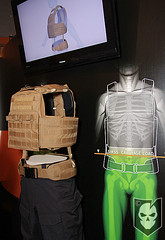