You’ve no doubt heard us talk about AustriAlpin Cobra Buckles and seen them utilized on products we’ve reviewed, like the 215 Gear Ultimate Rigger’s Belt and the Jones Tactical Cobra EveryDay Belt.

While Cobra Buckles are excellent buckles, I’ve recently been introduced to a new SRB (slide release buckle) called the Raptor at TTPOA last week. I definitely consider the Raptor to have been one of the best new products at the show and I’ll tell you why. 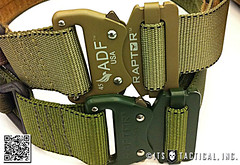 First let me give you a brief background and history on Rigger’s Belts, I’ll start with their origin as being made by Parachute Riggers in the military. A Parachute Rigger is just as it sounds, they’re the group responsible for the rigging, repair and packing of parachutes in the military. I know for sure the Navy and Army have them as an “A” School (PR) and MOS respectively.

As riggers commonly work with parachute webbing and buckles, the Rigger’s Belt was born out of spare materials and worn as a symbol of pride by riggers. Surely brought to the public eye by an enterprising rigger, they’re now made by many gear companies utilizing both the common Parachute Harness Adapter Buckle and more recently Cobra Buckles.

At some time during their history, the idea to add in an attachment point was born out of necessity. Initially added to back up a Swiss Seat, as shown here in our Knot of the Week, a piece of hardware called a “V” Ring was sewn in to route your carabiner through after clipping in to a Swiss Seat. Just in case your Swiss Seat starts sagging or you somehow screw up your knots and it falls apart, at least you’d have something holding you in to the rope.

Standard Rigger’s Belts today are virtually bombproof and can realistically function as an emergency rappelling harness, trust me I did it with a 215 Gear Belt. However, manufacturers aren’t going to put that in their product descriptions.

The use of Cobra Buckle has been a welcome addition to Rigger’s Belts, as the standard parachute grade hardware used in buckles and “V” rings is prone to rusting. In the Navy I was issued a Rigger’s Belt in “rollback land” at BUD/s because we’d do buddy drags and our standard Navy issue belts we’d wear with our cammies kept breaking. Our pants always wound up with rust stains where the buckle resided from saltwater corrosion after hitting the surf.

Not only is the Cobra Buckle made of aluminum, which doesn’t rust, but they’re quick releasable and won’t open under tension. Many dismissed the Cobra Belt as a safety risk worried that it would open at an inopportune moment, but that’s clearly not the case. The introduction of the combo that 215 Gear came out with on their Ultimate Rigger’s Belt, Cobra Buckle and sewn attachment loop, is a fantastic option in my opinion.

There are a few downsides to the AustriAlpin Cobra Buckle though, primarily the increased cost associated with using them. Any equipment utilizing Cobra Buckles is always going to demand a premium over traditional parachute hardware, because of the higher price the belt manufacturer is going to pay to obtain it.

Not only that, but it’s also meant that Cobra Buckle Rigger’s Belts can’t be listed as Berry Compliant because the buckle isn’t made in the United States. They’re made in Austria. Update: It’s been pointed out in the comments that Cobra Buckles have been approved for use on Berry Amendment products.

AustriAlpin does have US distributors, which cuts down on shipping costs, but they’ve always been in the retail  price range of $23 to $26 just for the buckle. Update: They can also be found between $20.30 and $24.50 thru distributor websites like Paragear.com.

The last hang up I’ve always had is that while Cobra Buckles are offered in Black, OD and Tan, the finish is glossy and reflective. Not that it’s a huge hang up on a belt buckle, but it’s something that’s always bugged me. 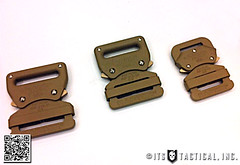 Enter the Raptor Buckle. Manufactured by American Direct Fabrication exclusively for JBC CORP, the Raptor Side Release Buckle System represents a bombproof buckle option that’s made right here in US!

The first thing that drew me to the Raptor, being showcased at the Marz Tactical Booth at TTPOA, was the flat coloration. I immediately thought, “oh man, why didn’t anyone do that sooner?” After talking with Mike, owner of Marz Tactical Gear and Octavio Cazares, R&D director for JBC CORP, I really saw the merits of the Raptor buckle.

Octavio handed me a complete spec package that highlights all of the testing that the Raptor has undergone, which includes exceeding NFPA 1983 Section 3.2.1.6 (load bearing test) and MIL-STD 810F (salt spray and blowing sand/dust). While these testing protocols may not mean much to you, suffice to say it’s guaranteed not to open under load or have any issues in salt water/sandy conditions. (See loop configuration testing results below)

Made of the same 7075 aluminum alloy as the Cobra Buckle, the US Patent-Pending Raptor uses high-strength solid stainless pins in assembly and is available in Coyote Tan, Foliage Green and Matte Black. In talking with Octavio, they can produce any Pantone color if you’re buying in quantity and they’re even looking into patterns (think camo) for their new hardware. Sizes offered currently are below and each come in dual adjustable, single adjustable male or female and non-adjustable male or female.

Hopefully you can see that the human body is going to break long before this buckle will!

Update: The specs on the AustriAlpin buckles can be found here.

Mike from Marz Tactical Gear had a few sample belts made up at TTPOA and said that they do have their Cobra Buckle Belt available with the new Raptor Buckle (the white colored text in the photo of the belts above was on sample pieces and isn’t on the production buckles). To inquire about purchasing (minimum order 200), you can find JBC CORP’s contact info on their Website. Details on the Raptor Buckle will be on their site shortly.

While no official retail pricing has been released yet, I’ve been told by JBC CORP that they’ll sell at a significantly lower price than the Cobra Buckles. Update: I’ll update this article with Raptor buckle pricing when it’s officially released.

One last thing I’ll say on the AustriAlpin Cobra Buckle is the dependency on the mechanical release tabs to be free of debris in order to operate. It takes a lot to clog the release on a Cobra Buckle and I’ve only done this trying to purposely test whether it would jam and has never happened to me under normal circumstances.

While I haven’t had the chance to test this out on the Raptor Buckle, it’s likely an abnormal amount on debris might do the same. That being said, I’m anxious to start seeing Raptor Buckles start making their way into the community and personally see the competition with AustriAlpin as a good thing for the industry.

You definitely can’t beat made in the USA! 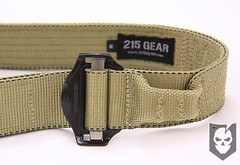 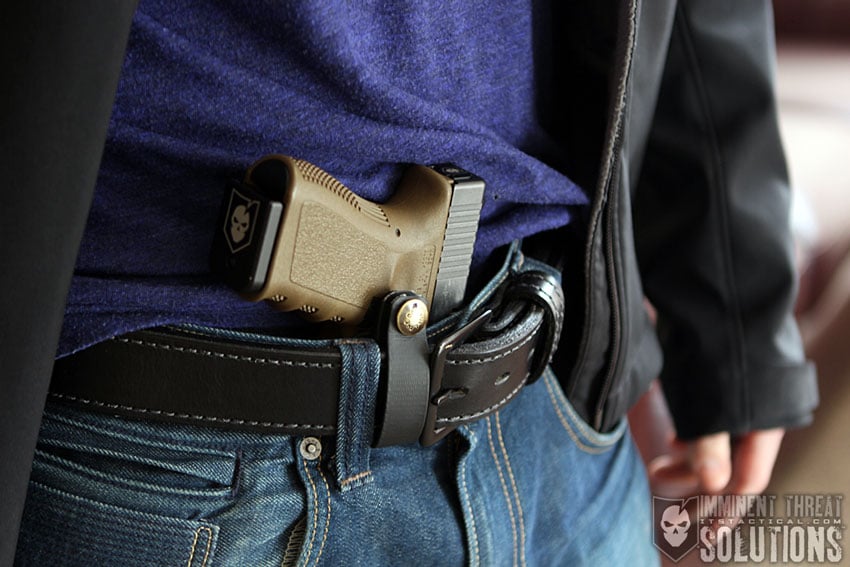