A Guide to Practical Spanish Language as a Skill-Set - Lesson 1: The Holy Grail - ITS Tactical

The ability to speak a second language is becoming an increasingly important skill-set. There are many ways to learn a language, from the not-so-good (software-based), to the best (immersion). This article should be used as a starting point to develop your skills in the Spanish language, but should not be your only resource. Interaction with native speakers, television, movies, radio shows and constant practice, should all be part of the learning process.

I don’t have a degree in Spanish or teaching, but I served as a Spanish Instructor at the U.S. Border Patrol Academy for four years and I’ll share with you the methods I learned and practiced at the time. My job as an Instructor was to prepare agents so they could conduct field interviews and interrogations in Spanish. Based on my experience over the past sixteen years, I believe adults are just as capable of leaning a new language as kids, but unlike adults, kids don’t worry about making mistakes or the perception of ridicule.

In this first lesson, which I call The Holy Grail, we’ll focus on pronunciation, which relies heavily on proper pronunciation of the vowels in Spanish. I’ve met people with many years of Spanish education who still can’t nail down the vowels. Practice the sounds and you’ll be able to properly pronounce any Spanish word.

I. Vowels and Special Characters

Good news: Unlike English, the sound of the vowels in Spanish never changes; ever. It doesn’t matter where they fall in a word.

The Spanish alphabet includes the Ñ, which sounds like the ny in “canyon”. The letters C and H are used together in Spanish much like the Ch in “chug”.

There are also two letters in Spanish that double up to give them a different sound:

The principles of dividing words into syllables are:

Words ending in a vowel or “N” or “S” receive the stress of the voice regularly on the next to last syllable.

Words ending in a consonant other than “N” or “S” receive the stress of the voice regularly on the last syllable.

Words stressed contrary to the aforementioned rules bear the written accent over the vowel of the syllable to be stressed.

Certain words bear the written accent to distinguish them from other words spelled similarly and pronounced similarly, but having an entirely different meaning.

The written accent is used to distinguish the exclamatory or interrogatory from the relative use of pronouns and adverbs.

The written accent over a weak vowel breaks up a strong/weak or weak/strong diphthong and results in two separate syllables.

Punctuation is the same in both English and Spanish with the following exceptions:

The following abbreviations are capitalized.

The next article will focus on parts of speech, adjectives, conjunctions and interjections, before moving to the Spanish sentence. Now go watch some Mexican soap operas (the visuals help), question your Spanish-speaking friends and start practicing. The best way to learn a new language is to dive into it until it becomes an effective tool in your tool bag.

Editor-in-Chief’s Note: You can also check out the Border Book in the ITS Store, if you’re interested in a field guide that focuses on the Spanish you’ll need to know to protect yourself and teaches English speakers to clearly communicate with uneducated or educated Spanish speakers. 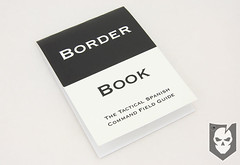