A few months ago I attended the RSKTKR class hosted by ITS Tactical  learning a vast number of new skills. One of the common themes at the class was practice, PRACTICE, PRACTICE, PRACTICE. There are many ways to practice drills, the most obvious method being live fire.

Another practice method is setting up a range in your garage and using an airsoft or paintball gun (hopefully write about at a later time).

The biggest issue with live fire training is the cost of ammunition is so expensive. Although I have found a local company (in Texas) that has the lowest prices for S&W .40 ammunition, it’s still pretty costly (about $230 per 500 rounds) and reduced hazard ammo for the range that’s the same grain as my carry ammo.

So the next option for live fire drills is to purchase a .22LR conversion kit. There are several different kits mostly are unique to the gun you may use. I use a Glock22, actually two, one for the house and one that I carry everyday.

Glock conversion kits are only offered by one company, Advantage Arms, who also manufactures a 1911 conversion kit . Shortly after taking Doc’s advice, I began the search to acquire a .22 conversion kit for my Glock. I started my search at the Advantage Arms  Website. I thought it was odd that they would no longer sell the conversion kit online, rather only through resellers still listed the MSRP.

After checking some local shops and ranges that I shop at, I found one at Cheaper Than Dirt’s brick and mortar store. Although I paid $30 more than the published price of $269.99 by Advantage Arms, I shelled out $299.99 for the conversion kit. Lets do the math, I go to the range about twice a month and fire 200-300 rounds per trip, the kit would pay for itself in roughly two trips to the range (at least that’s the way I justified to my wife). 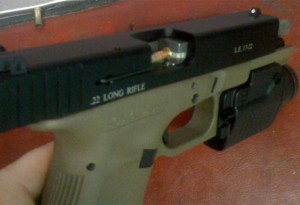 After purchasing the conversion kit I finally got some free time to go out to my favorite range On Target and try out my new money saver out.  Changing out the slide and barrel out is super easy. Basically you field strip the Glock, remove the slide, and reattach the conversion slide. very easy.

So loading up the conversion clip , I was ready to go.  First shot fired, second……jam!

After clearing the gun and inspecting, the first shell never ejected. So I tried again with the same result. As disappointed as I was, I packed back up and finished out with the standard barrel.

Later I went to the Advantage Arms Website FAQ and went through ensuring that I prepped the kit properly, used the right ammo and ensured that the slide hook engaged correctly.
Feeling better about another attempt, I was off to the range for a second time, where I had the same results!

Hoping I just had a lemon. I emailed Advantage Arms, several times. No response.  Maybe my email got filtered into a spam folder? So I called. I left a few messages stating that I was having issues and described that I had followed all posted corrective procedures listed on the FAQ of the Website with no success. After about a week I tried again and only received a rapid busy signal.

I also contacted Cheaper Than Dirt, who pushed me to contact Advantage Arms.  Not wanting to admit that a manufacturer could be that terrible, I decided to give it one more shot and try another type of ammo.   I went back to “On Target” to give it another go I purchased some CCI Mini-Mag 36 grain rounds. 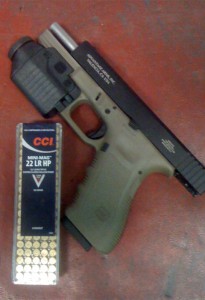 Using the success of finding the right combination of conversion kit to ammo, I ran about 200 rounds with no issues. The barrel performed really well keeping a very tight grouping (sorry no pics, you’ll have to take my word for it). More importantly, without the effect of recoil to worry with I was able to make some shooting corrections with my aiming.

There are many more benefits to a 22LR conversion kit than just cheap ammo with live fire drills.  If you spend a lot of time at the range a 22LR conversion kit is recommended no matter what the make, Glock, Kimber, Sig, it doesn’t matter. It’s less expensive, will improve your marksmanship, and its fun to shoot.

Follow up all 22LR shooting by at least 100 rounds of carry rounds or at least the same grain to reinforce the modifications and adjustments learned during the 22LR rounds.

If you buy the Advantage Arms kit for the Glock or 1911 don’t be shocked by the void of customer support.

Editor’s Note: Please join us in welcoming Matt Jones as an ITS Contributor, Matt is the VP of Antenna Products and an ITS Plank Owner. 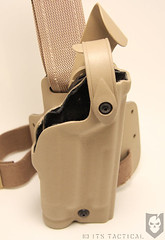 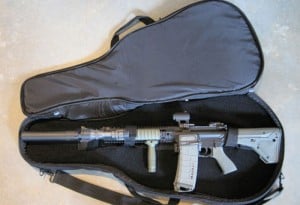 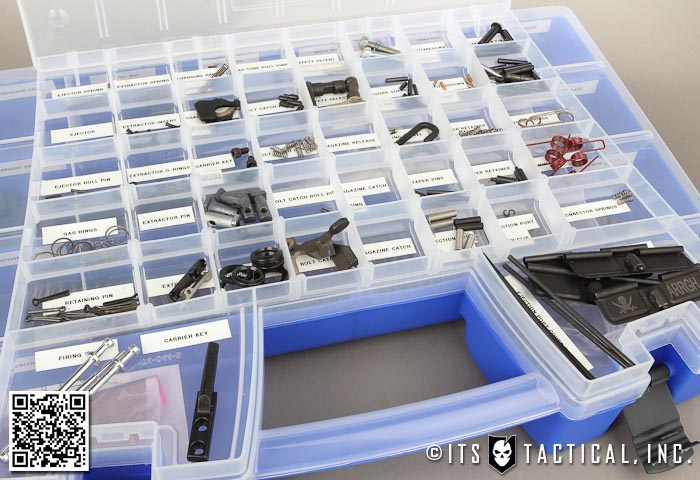 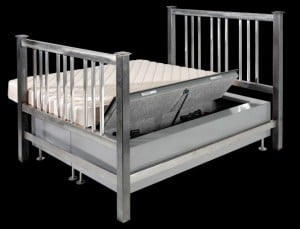