On the Cutting Edge: Counter-Blade Tactics for Real World Survival - ITS Tactical

A number of years ago, I was tasked with assisting a large Law Enforcement agency with edged weapons defense training. As I reviewed their existing program, I quickly discovered a number of deficiencies in both their tactics and training methodology. This caused me to rethink my own methods of teaching people how to survive an edged weapon attack, especially those with minimal training. 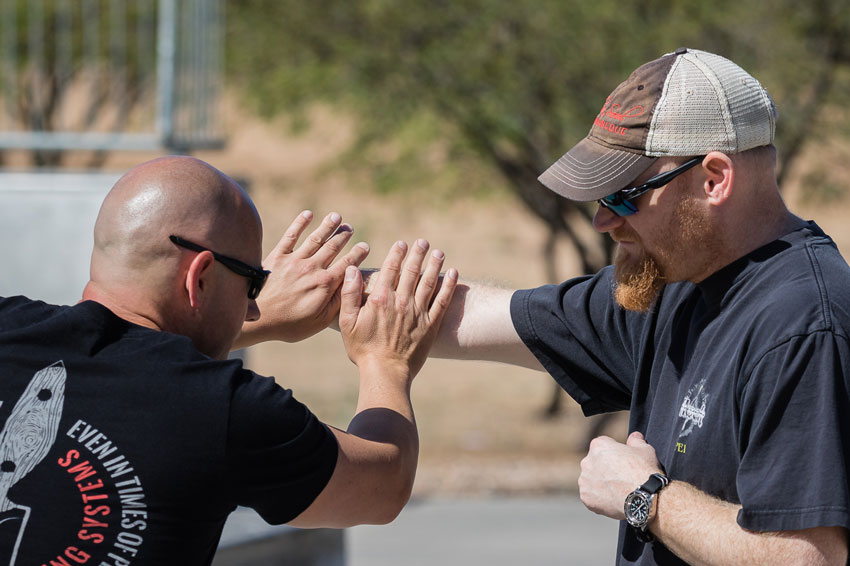 “Time Contexting” is a term I use to describe the process of placing trained fighting responses into the proper context of time. The time context should account for reaction time (action beats reaction) and the speed at which the attack would likely occur, including extension and retraction time.

Many edge weapon defense programs train to perform techniques using unrealistic time contexts. They usually looks something like this: a cooperative partner attacks in slow motion and/or leaves the attacking limb extended, many times overextended. The defender executes a series of movements which attack the limb or the opening created by the limb being extended. These techniques may appear to work during training, but as soon as an aggressive opponent who isn’t content with losing enters the equation, these techniques fall apart. If it doesn’t work against a full-speed attack from an uncooperative opponent, it doesn’t work.

Time Contexting doesn’t mean all training needs to be conducted at full speed; it simply means training must be based on realistic speed equivalents. When performing cooperative training at slower speeds, both parties should move at the same speed equivalent. Attacks shouldn’t be overextended or left in place after reaching full extension. They should be executed in the same manner they would be during an actual attack. Performing attacks in this manner not only ensures realistic responses are being trained by the defender, but also reinforces proper mechanics on the part of the feeder.

Many edged weapons defense programs also fail to recognize that, unlike a punch or kick, which requires a certain amount of distance to generate power, very little distance is needed for the delivery and recovery of a bladed attack. In addition, the angle of the attack can be changed in a split second. Such disregard for these truths results in inflexible and overcommitted defenses that focus on the blade and quickly break down once the anticipated attack changes course. 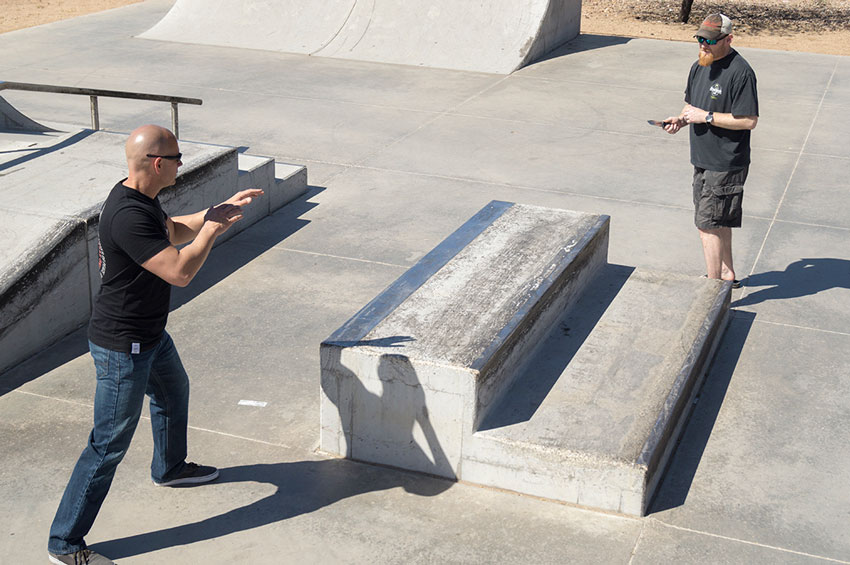 If you are ever faced with a blade-wielding attacker, there are a few things you should remember that will drastically improve your survivability. 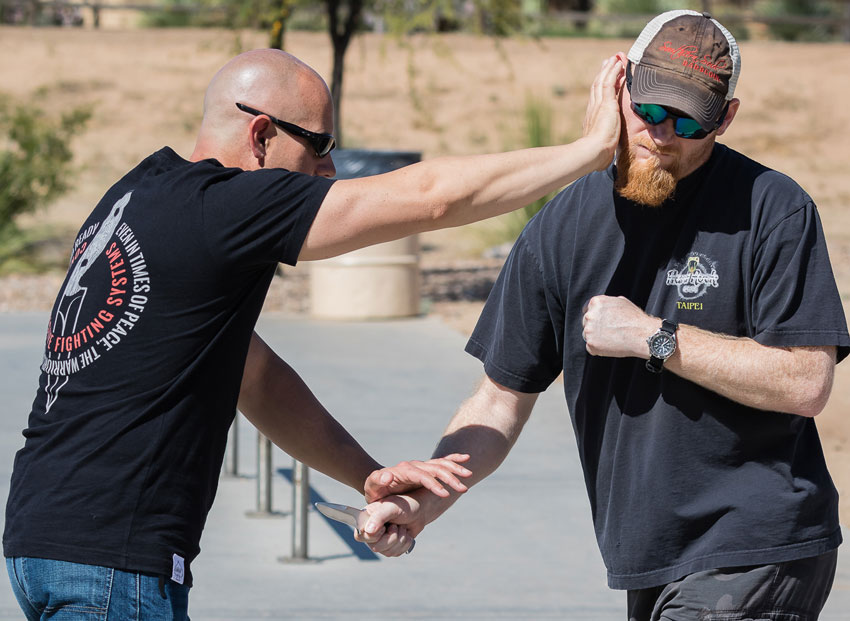 The edged weapon defense I teach in CFS Counter-Blade Tactics (my subsystem of empty-hand blade defense) uses the process of Check – Disrupt – Seize – Neutralize. This systematic series of actions is designed to address the attack from start to finish. However, any step in this process can be skipped (with the exception of the last one) depending on the dynamics of the situation. I’ll give you an overview of this approach, but realize that I’m just scratching the surface.

The check is used to intercept an incoming attack when a full evasion isn’t possible. Assume a neutral position with the hands up halfway between your chin and sternum with your palms facing outward. As the attack comes in, deliver a quick, retracting strike to the attacker’s arm between his wrist and forearm using the palms of your hands. (I advocate using both hands because it provides the most surface area to prevent the attack from slipping through.) Once contact is made, return to the neutral position and prepare to stop the next attack. Be sure to move off the line of attack as much as possible during the check.

Many edged weapons experts advocate only using the outsides of the forearms to stop or deflect an edged weapon attack in order to protect the arteries and tendons located in the arms. This isn’t a bad tactic, however, having trained thousands of Law Enforcement officers and civilians in edged weapons defense, I’ve found this is difficult for most people to do under pressure unless they’ve spent years training this way. People react with their hands.

Once the opportunity presents itself, move in and seize the attacker’s weapon arm to gain control of the weapon. Always strive to move to a position that places you outside of the attacker’s physical weapons. There are several ways this can be done depending on the situation and your level of skill and training. However, as a general rule, I advocate the following as the default method:

Grab the wrist of the arm holding the blade using a thumbless grip (aka Monkey Grip). With your opposite arm, grab deep behind their elbow. This gives you optimum control of the arm because it closes off the dead space and prevents them from being able to pull their elbow back to break free. From this position, maintain constant pressure to drive the attacker off balance. 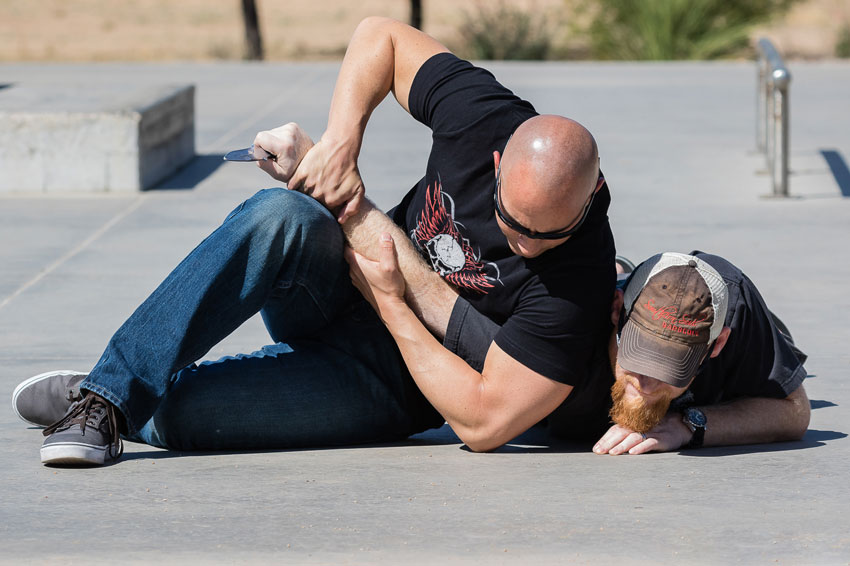 The final step in surviving as edged weapon attack is to neutralize the threat. This could mean disengaging and employing a firearm, but once you have seized the attacking arm, it’s best not to let go until you have removed the blade from the equation. One of the high-percentage techniques I teach is an arm-bar takedown.

From the position I described above, bring your inside arm over the top so the attacker’s tricep is in your arm pit. Stack your inside hand on top of the hand securing the wrist and drive your inside shoulder toward the ground. From this position, drop forward onto your inside knee and straight down as if trying to touch your elbow to the ground; keeping your weight focused over the attacker’s shoulder. From there, you can lock the attacker’s wrist against your outside thigh and walk it up to lever the arm and secure the weapon.

What I’ve presented here are a few basic fundamentals for surviving an edged weapon assault, as well as a brief overview of my way of teaching Counter-Blade Tactics. If at all possible, avoidance is always your best defense. However, life doesn’t always offer us that opportunity. Train your mind and train your body so you’ll be prepared for whatever life throws your way. 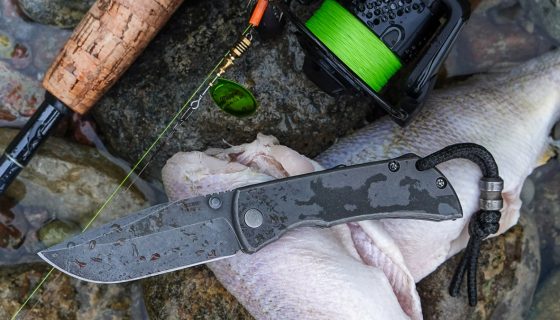 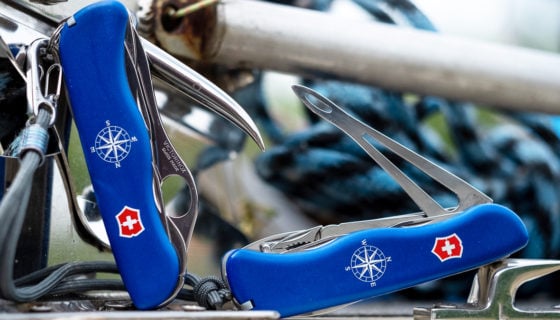