14 October 2012 will be a day that lives inside me for the rest of my life. I have been a skydiver for 18 years. I have been a military parachutist for the same 18 years. I am a military freefall instructor and I have taught nearly every type of jumping the military does. I stopped counting my jumps at 5,000 and that was 6 years ago. I worked in the research, design, test and evaluation field off and on for many years and today I am an RDT&E consultant. I have also been an enlisted aircrew member for my entire military career. It has been my job to know human flight, high altitude parachuting, aerospace rescue and anything connected to it. On 14 Oct 2012 my world was blown sky high!

It was on that day that 43-year-old former Austrian Paratrooper and aerial daredevil Felix Baumgartner set multiple world records previously held only by the US government set decades ago. He did it with the help of the Red Bull Stratos team, the David Clark Company and the United States Air Force.

In 2005 Felix Baumgartner and Red Bull began to lay the groundwork for the project. They wanted the mission to “expand the boundaries of human flight.”

In 2007 they began recruiting the team that would execute the Stratos mission. The primary planning phase began and the capsule construction began in Lancaster, CA.

2008 saw Col. Joseph Kittinger join the Stratos team. Col. Kittinger, until a few days ago held the record for the highest freefall jump in history. He jumped from 102,800ft in 1960 wearing protective gear that was so primitive it is hard to understand how he lived through the jump. And in fact he nearly died on that and several other jumps leading up to it due to equipment choices and malfunctions. Perhaps one of the more hard core aspects (as if that’s not hard core enough!) was that his parachute was an old S-18 aircrew egress parachute and not the custom ram air canopy used these days. That means every opening and every landing sucked in a huge way!

It is important to depart hard left for a moment to explain that the reason the USAF was conducting these jumps was to conduct research and development for the USAF and NASA manned space programs. The knowledge gained led to the development of every pressure suit and space suit made between 1961 to present day. In addition, much of the technology we now take for granted was also part of this and similar programs. In those brave days you identified a need, you built something and then you tested it in real life! It was extremely dangerous work.

2009 saw Felix test jumping the new suit. He had to figure out how to fly in it and how to conduct emergency procedures in it. All of this had to be re-written and practiced. His practice jumps went as high as 27,000ft. At the same time, six time Space Shuttle Crewmember and surgeon John Clark signed on as the medical director and set about refining the safety protocols. This was also when the specific design of the parachute and harness began. It had to survive the environment and the fall.

Now that sounds simplistic but it is very dangerous. All containers are not created equally. They are very specific! For example, a Vector harness is terrible for flying in a heads down attitude while the Javelin is excellent. The harness has to maintain integrity in the high-speed environment or it may not open properly and in some cases can kill the jumper in the event of a opening malfunction. The team also purchased the largest high altitude balloons ever made during this year.

In 2010 regulations in the US required Felix to obtain a “gas balloon license” if he was going to be allowed to conduct the experiment. Extensive wind tunnel testing was done to test how every piece of equipment would affect flight and stability at high speed.

2011 saw the USAF involved in testing the suit and capsule for the negative pressure environment of 120,000+ feet. It was here that the suit was certified for the purpose it was built for. Felix spent the year in rigorous physical training, psychological preparation and technical training on the equipment and systems. It is important to note that Felix discovered that he is extremely claustrophobic! It was so bad that he fled Europe to the USA where he sought out the help of sports psychologists and others to overcome his phobia. Some of this was creating an overly elaborate and detailed set of checklists to distract him from the fact that he was locked in a pressure suit in a capsule for many hours.

After intensive training and evaluation, the team then did a complete review of every piece of gear they had built or procured. Was it doing the job? Did they need to improve anything? Did they need to scrap anything. These questions could save lives in the next year.

The secret launch site and facility in Roswell, NM was finally revealed in 2012. It was a very busy 10 months! Unmanned balloon and capsule tests were completed. These were followed by the first operational test of all systems from an altitude of 71,615 feet. This was followed by another test at 97,063 feet where he achieved a speed of 536 MPH.

Then finally, on 14 October 2012, after an aborted launch attempt days earlier, Felix in the Stratos capsule ascended to 128,100ft. The only glitch we know about is a problem with the heater in the visor. Another science note that will be interesting to hear more about was the balloon’s behavior above 115,000 feet. The average ascent rate was approximately 1000 feet per minute. But above 115,000 feet instead of leveling off and stopping, it doubled its ascent speed! There is no telling how high it would have gone if they had not dumped helium from vents to stop the ascent. It may have been due to them jettisoning 60lbs of ballast earlier in the flight in order to punch through the jet stream earlier in the flight. At any rate, the capsule then began to bob and bounce slowly between 127,000 to nearly 129,000 feet but remained in that altitude bracket.

After leveling off (relatively) Felix began the egress checklist. I think his claustrophobia was kicking in because early on he sounded a little shaky when the hatch did not open. Col. Kittinger had to remind him he was still depressurizing. Then as the checklist ticked down it was obvious that Felix was being very, very careful and meticulous. He was concentrating so hard that at times he did not respond to the radio calls and instead just gave a thumbs-up.

The danger was immense. And wrong move could catch something and tear the suit. That would have been a quick and ghastly death. The concerns of this were so great that the “live” feed was actually on a 20 second delay in case tragedy struck. I don’t think I have ever been so desperate to help someone as I was at that moment and I had to constantly remind myself to breath.

Felix then said a few words that we could not understand. Then he saluted the planet and said, “I’m going home now.” With that he took one tiny hop off the platform and fell, accelerating to Mach 1.24 34 seconds later. He lost control as he passed through 700 MPH entering a violent spin. But as the air became more dense below he was able to stabilize again and regain level flight. Like the hardcore paratrooper he is, he immediately called into mission control to report the spin and the problems and update everyone on how he was doing. I won’t lie, I shed a tear at that moment.

He was still falling at over 500 MPH and he was reporting data. How do you put words to that? Many of you may not understand the fact that freefall is fun between 2,500-12,500 feet. But above that, things get cold and difficult and that is at 120 MPH. It takes a ton of strength and endurance to maintain proper body position at all. But to then start analyzing information and report it back is amazing! But Felix is also part scientist. He knew that the information was important and he also knew that it is NEVER over until you are on the ground and safe. If observation instruments failed and he burned into the ground and destroyed his personal equipment, he wanted someone to know what happened. That took some guts and a clear head in an extraordinary situation.

Shortly after this he reported that his visor was badly fogged up. This is bad because he was using a wrist-mounted altimeter to determine his altitude. If you can’t see it then you can’t pull at the right altitude and it is poor performance to just let your Emergency Activation Device open the reserve for you. Initially I thought he pulled high but that was not the case. He pulled his parachute at 5,300 feet, just as planned (5000ft). The capsule had drifted a great distance from the base and there was a race for the recovery helicopters time to locate him and give him some guidance on what direction to land in.

As if everything he had done was not enough, he absolutely nailed the landing in a textbook ram air canopy stand up landing into the wind. Once the canopy had collapsed he sank to his knees and raised his arms in victory as the recovery crew gathered around him.

An amazing feat accomplished, three world records shattered and the aerospace world changed forever. But astonishingly, thousands of people looked at this event and chose to hate the people, the event and the company that did it. Irony abounds as these people used the very technology these types of experiments paved the way for, to denounce it as worthless and stupid. If this doesn’t tell us our education system is broken, I don’t know what will. Ignorance it seems knows no bounds.

But there are thousands more that genuinely don’t know and would like to know how this impacts them or the world we live in. And that is both worthy of an answer and a useful line of questioning.

As whole, we discovered many things that I have broken down into Science, Equipment, Capability and Other.

There are many things I have unintentionally missed in the list above, but I’m sure you get the idea. This was a very important event for the civilized world, science, aviation and space exploration. The ramifications will be felt for decades. I encourage everyone to keep looking up and pondering the next great adventure. It could be you next time! 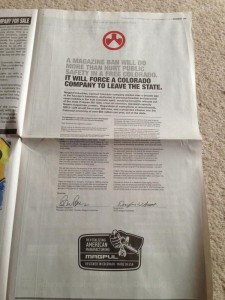