We were recently sent a testimonial on the usage of our EDC Trauma Kit by a first responder to an accident, where a man jumped from a moving car on a Tulsa, OK expressway and was struck by two vehicles. Below is the write-up that he sent us, which is a not only a great recap of the incident, but also an honest evaluation of our kit with some lessons learned.

Recently I had placed an order for the ITS Tactical EDC Trauma Kit and got my “Box of Awesome” in the normal quick fashion. I wanted to be able to basically carry a blowout kit, but didn’t want to be the guy in the office that people whispered about. Having returned home from Afghanistan late last February, I’d gotten very used to having one readily available at all times.

Understanding that I now manage a retail store, there was the hesitation of having to explain it to someone. A full size blowout kit was a bit big to be carried in my work pants back pocket. I already have a decent EDC setup, but I really wanted to be able to carry some type of blowout kit, so I decided to give the ITS EDC Trauma Kit a shot.

The first few days it was bulky and uncomfortable, but no one noticed it, or at least no one said anything about it if they did. After about a week, my wife stopped giving me that look and I started popping it into my back pocket every morning. I felt better knowing I was discreetly soothing that little itch I get when the unprepared monster creeps in. The kit did smooth out and I can now put it in my pocket rather easily without issue. In fact, the coyote pouch actually looks like a wallet when it does pop up, so people have yet to say anything to me about it.

After work, two days a week I go to class until ten at night, after which I drag myself home and start over again. With the recent addition of another child to the family, sleep has been a commodity that would be easier to find than hot water in Afghanistan. Wash, rinse and repeat, the schedule goes with the occasional skydive to break the monotony when my wife thinks my eyes are just a bit glazed over. This has been my life while trying to finish my degree in between deployments.

Last week on my way home from class it looked like it was going to be just another tedious drive home to start the cycle over again. On my way home I noticed a vehicle at a strange angle on my way home. As lights flashed by from on coming vehicles, I could see a body in the middle of the highway. It had to be a body, I thought to myself, there’s nothing like the outline of a body of the ground. If you’ve ever been deployed or work in a line of work where you see that sort of thing, you know the feeling. I have a hard time explaining that to people who have never seen that sort of thing, but it’s just a shape you’d know.

I slammed on my breaks and ran around to the back of my jeep where I keep a limited med kit. Having an addiction to adrenalin as my wife loving calls it and the father of a 5-year-old, you just learn to keep that stuff around. I grabbed the bag and ran back to the shape I was praying wasn’t a body. After all, better to be the crazy vet guy than have to try and deal with the worst day of someone else’s life. Sad to say it was the later of the two options and the guy was in pretty bad shape.

Just like in most traumatic incidents, there were a few people milling around taking pictures and one guy a little closer, but not touching the guy bleeding out in the middle of the highway. It seems like that’s just the way the human tribe works, some people respond and others just don’t think of it.   It’s not that they don’t want to help and if you tell them to do something they will, but otherwise they’ll just watch. The actions I took, seemed like they just happened, it’s not that I thought of what to do, I just did it. I guess that saying about not rising to the occasion, but sinking to your lowest level of training is true.

When you get down on the ground with a person that’s bleeding heavily, you’re going to get dirty and that’s just a fact. The backup blowout kits we carried in our calf pocket in Afghanistan didn’t have gloves and the thought behind it was that they were for a last ditch effort or in the case something caught you so off guard, you didn’t have your kit on.   Turns out when I tore my kit open, I tossed those to the side somewhere and just got to work without thinking about it. The guy on the ground had severe head trauma and his most of his face was gone. His trachea was off to one side and his ankle was barely connected.

With a bit of yelling and stimulus, the guy on the ground moaned and gurgled which meant it’s time to get dirty. He was rapidly bleeding out from his head injuries with a compound fracture (mostly amputation) and no doubt internal bleeding since he was choking on blood. I grabbed the guy that was close enough, but not touching him and asked if he knew what happened. He said something about a motorcycle, but the important part was that he got close enough for me to ask him to maintain the victims airway so I could work. My kit was rather thin but then I remembered I had my EDC kit in my pocket and that compound fracture needed a tourniquet. To be honest, it was mostly an amputation but there was a bit of skin holding it all together.

I pulled out my EDC kit from my back pocket and tore it open looking for the tourniquet.   Well imagine my surprise when I pulled out something that didn’t look anything like what I was used to. You see, tourniquets have things you turn to make them tight. It’s kind of a rule and even when you pull one out of your fourth point of contact on an objective, you have to have a stick or something to twist until the blood stops squirting. It’s just something standard that comes with tourniquets, but this SWAT-T tourniquet didn’t even have a buckle.

To be honest, once I got it open I didn’t even take the time to read the illustration on how to turn shapes into other shapes, etc. I pulled that thing tight and just started wrapping till I couldn’t pull anymore. With the pressure from the wrapping holding it in place, it stayed tucked and I went back to check his airway and to try and get the people around to do other things that could actually help.  When I went back to check the bleeding on what was left of his lower leg it had stopped and I couldn’t find a pulse below the tourniquet. So score one for innovations, because otherwise I’m sure my improvisation would have resulted in jokes flying around for years.

To make a long story short we stopped the bleeding with the tourniquet successfully and managed to keep him breathing till emergency crews arrived.   The ending, as many of you know, isn’t always nice and in this case the gentleman only had a few hours left. The important thing to me was that I did the best I could to give him a chance. If I hadn’t had my EDC Kit on me, I have no doubt the process may not have even given him that. So if you ever have a doubt that you need to carry something on you for blowouts I can tell you that you do.

The kit paid for itself that night and looking back I have some training scars, like not putting gloves on and having no idea what the actual tourniquet looked like. I know what I need to work on now and to be honest if that was the worst thing I did wrong, I’ll take that. My kit worked and my training worked which is really what we all wonder sometimes when the heat kicks up. Bryan and ITS did a great job putting this kit together and I cannot endorse it enough! 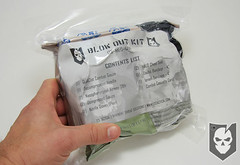 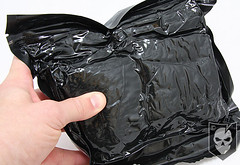 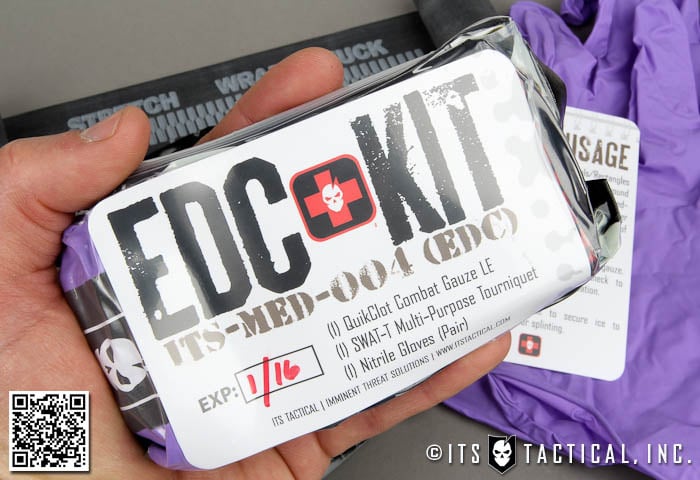 EDC Trauma Kit Now Available for your Back Pocket