OneUp Designlab, the powerhouse behind the Multitasker, teased the masses with a first look of their MagPod in 2012.  Since that day, I’ve followed along with their updates and occasionally glimpsed one of the prototypes in the wild, including an early prototype Bryan had to T&E back in the beginning of MagPod’s development.

The whole idea of changing the baseplate out on a Magpul PMAG and turning it into a monopod has intrigued me and I’ve been eager to see how well it would perform. The first two photos you’ll see below are of the prototype MagPod, as we wanted to show the design progression through the years. 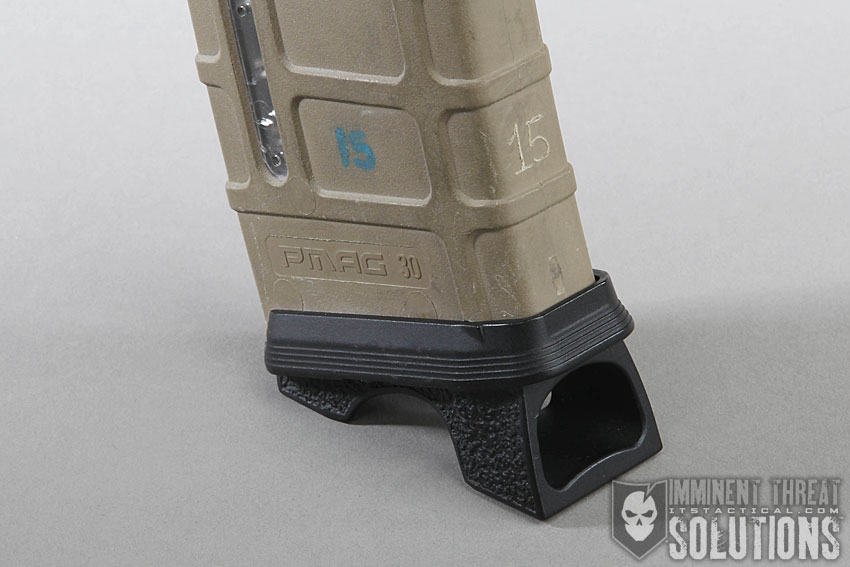 Just as many of you probably are, I’m guilty of using a Magpul Ranger Plate to steady or rest my rifle on various shooting benches, or in the dirt. While it may not be intentional, it does happen a lot. For this reason I always found myself checking up on the MagPod during the years they were fine tuning, testing and ultimately delivering the final product. 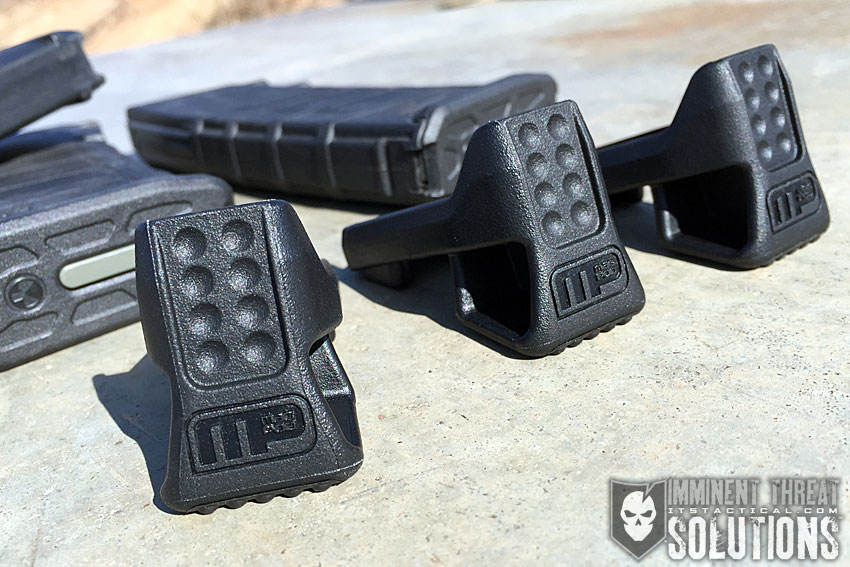 After opening the package and holding the MagPod, I was pleased with the aesthetics and design. Even without installing it onto a PMAG, I could see the form and function of its intended purpose. I appreciate that the concave area towards the front foot can be gripped in the same way I’ve been used to with the Magpul Ranger Plates on my PMAGs. At first, I thought the entire surface area of the MagPod was smooth polymer, until I noticed that the front foot had a dimpled rubber pad.

This adds grip to keep the MagPod from sliding on a hard surface like you’d expect from polymer. Installing the MagPod is pretty straight forward, if you have ever installed a replacement baseplate on your PMAG, it is no different. Press in on the plastic detent, slide off the current baseplate and slide on your MagPod. In a matter of seconds, you’ve now just transformed your PMAG into a monopod. 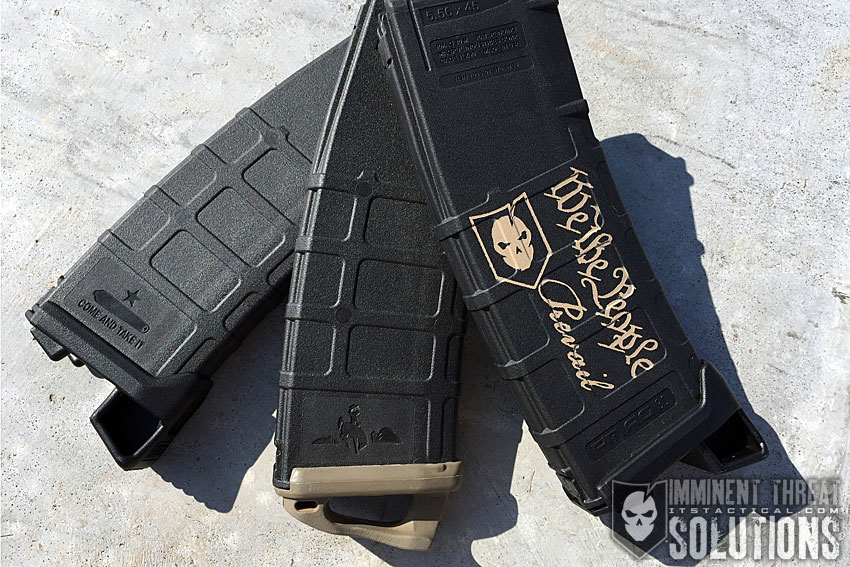 With MagPods installed it was time to hit the range; first up was a shooting bench. I extended my stock and made sure that the rifle was steadied on the MagPod. Firing a few rounds down range, I made it a point to push and pull on the rifle in hopes to cause a malfunction. Shot after shot, rounds were hitting their intended target and the platform was steady with sure footing. This is something I’d hesitated to do with a Magpul Ranger Plate, because of the habit ingrained from days of using USGI Aluminum Magazines.

With USGI mags, I’ve experienced malfunctions in the past from using one as a monopod, but this could have had something to do with an out of spec magwell on the lower receiver as well. Though ever since, if I ever found myself resting on a mag, I would readjust and make sure that the magazine wasn’t touching the shooting bench or the deck. At first it felt awkward steadying my rifle on the magazine equipped with a MagPod, but this is what it was designed for, to use as a monopod. 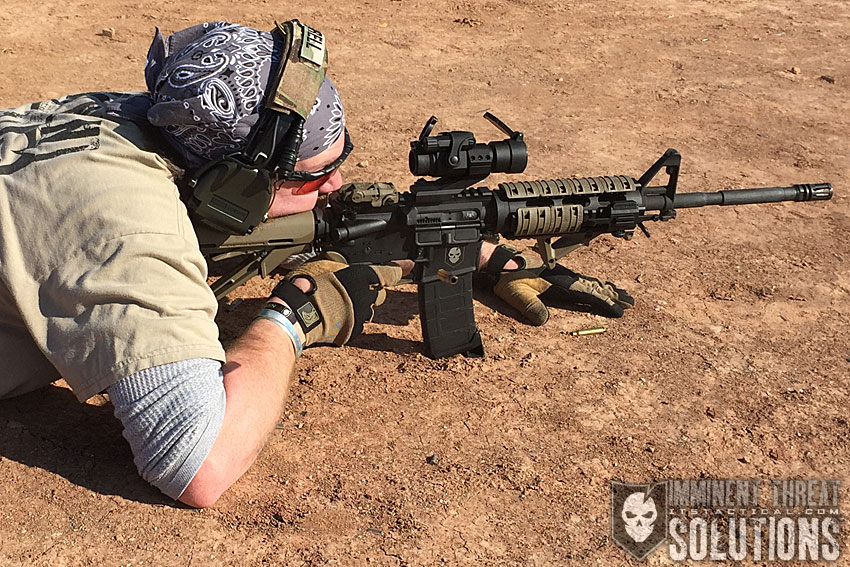 After the shooting bench, I went into the prone position and really drove the magazine into the ground. This time, instead of having my stock extended like I had previously, I made sure it was all the way in and that my off-hand didn’t stabilize the rifle. This way I could really gauge the stability gained by the MagPod. Each trigger pull was met with the same accuracy and stability that I’d experienced on the shooting bench. Again, I pushed and pulled on the rifle as I fired, trying to elicit a malfunction without avail. The MagPod certainly provided a stable firing platform from each position and performed incredibly well.

Next up was seeing how well it stacked up against a Magpul Ranger Plate, who’s main function is facilitating an easier draw from a mag pouch. Keeping a double stack of PMAGs with Ranger Plates and a double stack with MagPods installed, I found very little difference as I grabbed one after the other. I was able to get a grip on the MagPods just as easily as the Ranger Plates and in no time I was finding a groove for loading. I sense this was something that OneUp Designlab spent a lot of time focusing on, because it clearly shows in the finished product. Overall the MagPod does exactly what it was intended to do; provide a versatile, lightweight method for aiding the draw of magazines, while at the same time providing a solid monopod shooting platform. OneUp Designlab’s years of development and their pursuit of perfection are a testament to the quality of their products and I look forward to all that they do in the future.

The MagPod is sold in three-packs and is now available from online retailers like SKD Tactical and Tactical Distributors.

Editor-in-Chief’s Note: While Matt Gambrell has been with us in the ITS Graphics Department for years, please welcome him aboard as a contributor on ITS!  When not basking in the soft warm glow of monitor illumination, Matt tends to his hobbies and interests of Zombies, UFOs, Sasquatch, technophilia and all things handed down to man from Cupertino, California. In general, he’s a geek who can be found outdoors or at the shooting range when the internet is broken.