This recent news of  the TSA allowing small knives onboard aircraft, has flooded the internet with misconceptions and question as to what constitutes a “small knife.” Today, with the help of a great email I received from KnifeRights.org, I’ll attempt to set the record straight.

John Pistole, a TSA administrator, recently announced the lift on their ban of small knives at an aviation conference in New York. He stated that these small knives would be limited to “retractable blades shorter than 6 centimeters (2.4 inches) and narrower than 1/2 inch at the widest point.” There would still, however, be a ban on “knives with locking blades or molded handles” and that “fixed blades are still prohibited.”

As you can see with the quotes above, this leaves a lot up to interpretation, so I was grateful when I received the recent email from Knife Rights that had images from the online TSA PDF, showing exactly what these new guidelines allow. 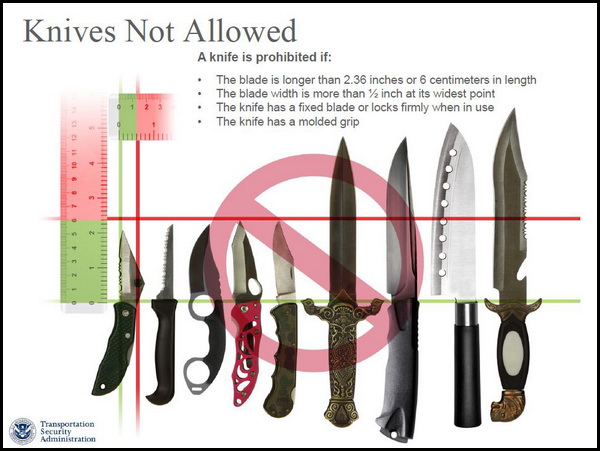 From the images, you can see that by “retractable,” Pistole means “folding.” If you’ve ever owned a Swiss Army Knife, you’ll know that the blades don’t lock in the open position, but are foldable. This can be dangerous when cutting, as the blade can fold back into your fingers if you’re not careful.

Obviously the TSA doesn’t believe these are just as capable of inflicting damage as a locking blade and are also still banning box cutters and razor blades. Pistole said  “there is just too much emotion involved with those.”

Knife Rights suggests that whatever knife you’re carrying through the airport, (after April 25th, 2013) be sure to measure the blade length from handle to tip, not just the sharp edge. They also mention that Leatherman “Squirt” or “Style” multi-tools are allowed.

The term “molded grip” has apparently been invented by the TSA and Knife Rights suggests that it means any handle that is ergonomic and excludes anything but slab-sided Swiss Army Knives or multi-tools.

Shortly after the announcement yesterday, one of my favorite knife companies, Emerson Knives, released an image on their Facebook page of the new “TSA Compliant”  knife, the Hummingbird. As you can see from the photo below, it’s questionable whether the TSA is going to allow this to get through. There’s no production timeline posted on the Hummingbird yet, but I’ll be waiting with baited breath for feedback on whether someone gets one through.

Just remember that the final decision on these allowable knives rests with the TSA, however “rational” their decision appears to be in this situation. I am glad to see this get through though, hopefully our Knife Rights organizations like kniferights.org and the American Knife and Tool Institute can help at getting the TSA to further relax their guidelines. It’s important to support these organizations, so please head on over to their Websites for more information and do what you can.

I assume it’s going to take quite awhile after April 25th for everyone working for the TSA to be brought up to speed, so be prepared to lose a few Swiss Army Knives until they get the memo. Kelly used to travel with small scissors for her crochet projects and got through just fine at multiple TSA checkpoints, only to have them taken by a misinformed TSA agent in Albuquerque, NM. Please  remember the changes don’t go into effect until April 25, 2013, so don’t try to bring your small knife on board until then!

What does everyone think of the new guidelines? Does the Emerson Hummingbird stand a chance?

Your Knives Are Safe!

Fight For Your Knife Rights Now! 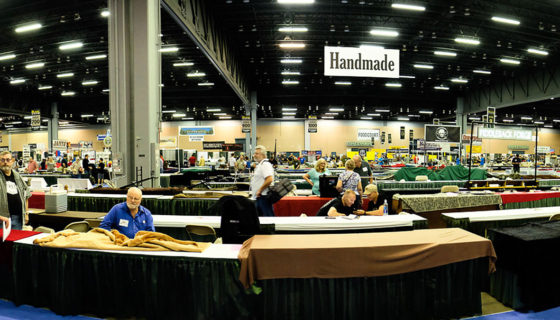