We had a fantastic turnout at our ITS organized BUYcott event at Starbucks this morning! It was great to see so many people come out to support the 2nd Amendment and have a cup of coffee with us. Our peaceful hang out even had the Hurst Police Department come by to see how things were going.

When we first showed up at Starbucks this morning (with our Guns and Coffee Patches on of course), they weren’t all that receptive to our presence as you’ll see in the video below. They marked all of our $2 bills to see if they were counterfeit and wouldn’t accept the majority of them. As you can also see in our photos, our bills were perfectly legit, even verified as such by the officers that showed up.

[flickr id=”6876819587″ thumbnail=”small” overlay=”false” size=”medium” group=”” align=”right”] It’s tough to support a company that seems to not want to be supported, at least at the Starbucks on Pipeline and 820 in Ft. Worth, TX. As mentioned, the Police showed up with a report that we were “demonstrating” outside, when all of the roughly 20 of us were doing is standing around talking and drinking coffee.

The officer also laughed when we showed him the $2 bills the improperly trained Starbucks employees had marked up. They tried to say that the ink smears on fake $2 bills, as it was on our “newly printed” $2 bills. Despite me trying to say that it’s smearing because it’s new ink and that it turns black when a counterfeit detector pen is used to mark on it. Starbucks obviously needs to train these employees better at this location.

It was great to have the support of the local Police and they all enjoyed the ITS patches and stickers we handed them; the first officer that walked up gave us a triumphant fist in the air and a “I’m with you guys.”

Thanks to everyone that showed up to support the BUYcott, including the guys from Chosen Tactical and Lone Star Medics. Even if the employees didn’t seem to want the support, they’ll at least remember why we were there. I’m continuously humbled by all the awesome people who have helped ITS grow into all that it is and I can’t wait for the next meet up (that may be misinterpreted as a demonstration!) 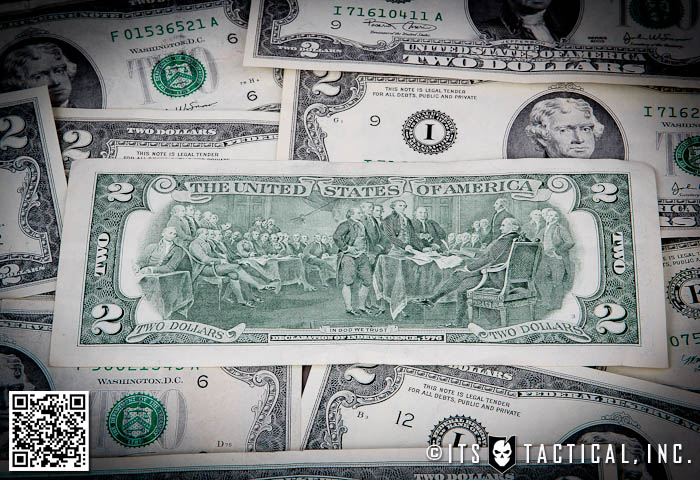